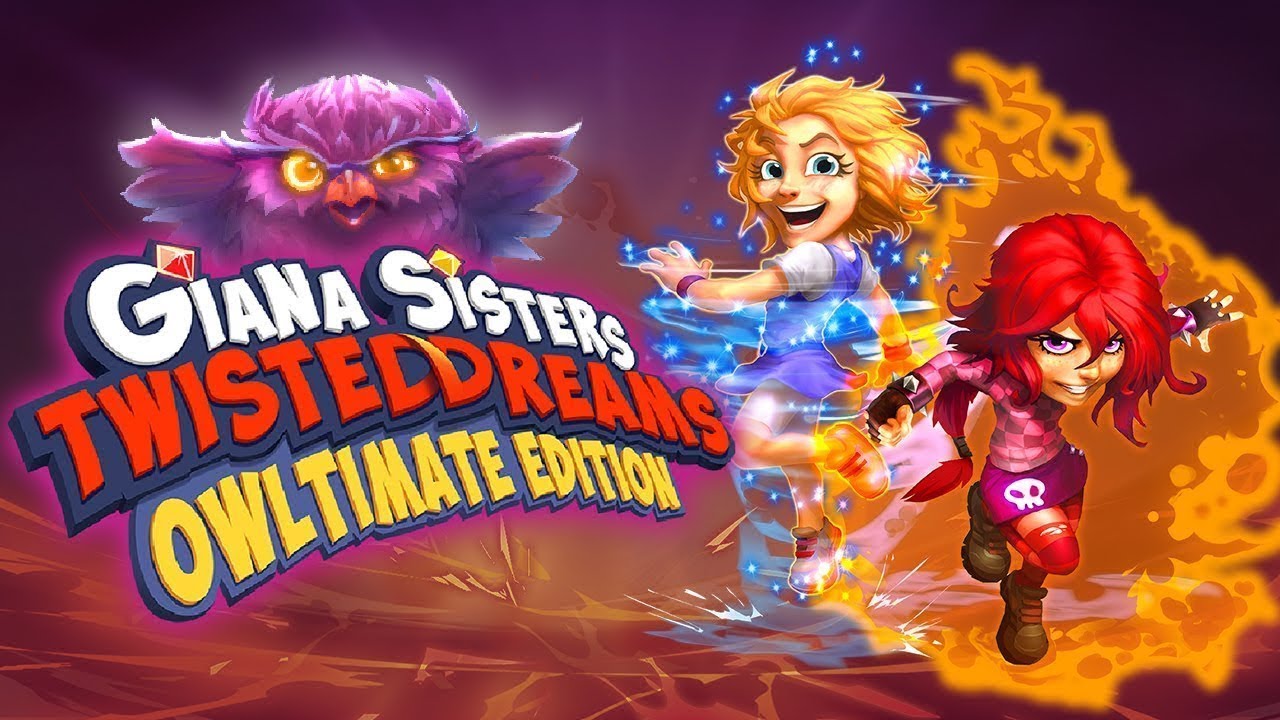 Giana Sisters may have one of the weirdest gaming histories of all time. Originally released for the Commodore 64 in 1987, The Great Giana Sisters was little more than a blatant clone of Super Mario Bros. – so clone-y, in fact, that Nintendo themselves apparently forced the game’s removal from store shelves shortly after release. Fast forward over two decades later to 2009, and the owners of the Giana Sisters IP randomly decided to release a sequel to the game on none other than the Nintendo DS, creatively titled Giana Sisters DS. It did well enough to garner a fanbase willing to crowdfund a sequel, and Giana Sisters: Twisted Dreams is the result of that effort. Unlike its ancient predecessor, however, Twisted Dreams is anything but unimaginative.

Giana Sisters: Twisted Dreams, is a 2D collectathon platformer that takes its Mario-inspired roots and throws them out the window. The story is simple: your sister has been kidnapped by a big dragon, so you have go after her through various levels of hopping and bopping… okay, maybe the premise still takes a page from the portly plumber’s playbook, but the gameplay is another story. Instead of having a traditional power-up system, Giana has two forms that she can switch between at will.

When playing as Cute Giana, you can press X to do a spin that serves as both a double jump as well as a hover move. When using Punk Giana, you can press Y to shoot forward like a fireball, decimating enemies in your path as well as allowing you to ricochet off of walls. It’s a simple but effective move-set, and the developers get a lot of mileage out of it across the game’s 40 levels.

While completing any given stage is generally not too difficult a task, the meat of the game comes from its collectibles. Each level is packed to the brim with gems, and you’ll be frequently forced to go off the beaten path to find them. Donkey Kong 64 fans may experience PTSD flashbacks when they encounter red and yellow gems that can only be collected by one of Giana’s two forms, but thanks to the instant switching mechanic these simply serve as a way to provide extra challenges rather than tedious exercises in backtracking. That being said, with so many gems to collect, it can be slightly annoying to discover at the end of the level that you missed a few and have no choice but to replay the entire stage again if you want the satisfaction of 100%.

The game’s levels are separated into four chapters, each of which ends with a boss. These baddies end up being the lowlight of the game, as they tend to be rather long and annoying. They’re initially a case of trial and error as you figure out how to dodge their attacks, and once that’s solved it’s just a matter of sitting through their overly long attack patterns until you finally get an opportunity to hurt them.

For the less skilled gamers out there, Twisted Dreams offers a newbie-friendly Normal mode that provides more generous checkpoints in levels that are made slightly easier than usual. Veteran gamers will want to stick to Hard mode however, as the game’s many optional challenge modes cannot be unlocked when playing the Normal difficulty. These extras include Score Attack, in which you try to collect gems and defeat enemies quickly to raise your score, Time Attack, in which you blast through a level as fast as possible, and Hardcore Mode, where you attempt to beat every level again, this time without any checkpoints.

For the über-hardcore among you, there is the appropriately titled Über-Hardcore mode in which you must complete the entire game without dying once, and you can’t even unlock the mode without first beating Hardcore Mode. Suffice to say that I did not bother to test this feature, but good luck to any of you masochists out there who feel the need to punish yourselves.

The most notable aspect of Twisted Dreams is easily its striking visual style. When playing as Cute Giana, the world around her is nightmarish and dark, with demons and skulls. When you transform into Punk Giana, the visuals instantly shift to a much more friendly style, and those same demons and skulls transform into fluffy owls and smiling faces. It’s very cool to see everything change at the push of a button, and it’s equally matched by the themed soundtrack. The composer of the original Great Giana Sisters returns with some mellow electronic tracks when playing as Cute Giana, but I personally preferred the hard-rockin’ heavy metal remixes that play when you switch to Punk Giana.

Unfortunately, this “dual-world” gimmick is sometimes a double-edged sword. While it’s neat to see the shifting visuals and music at first, it can lead to a samey feeling throughout the game. Whether you’re in a cave, a castle, or a grassy plain, everything looks and sounds either cutesy or dark with no exceptions and can lead to Twisted Dreams‘ many stages blending together. To mitigate this potential for burnout, I found that the game was best enjoyed in short bursts rather than long sessions, a play style perfectly suited to the Switch.

Thanks to its epic soundtrack, gorgeous graphics, and tight gameplay, Giana Sisters: Twisted Dreams is a great 2D platformer that fans of the genre should not miss.