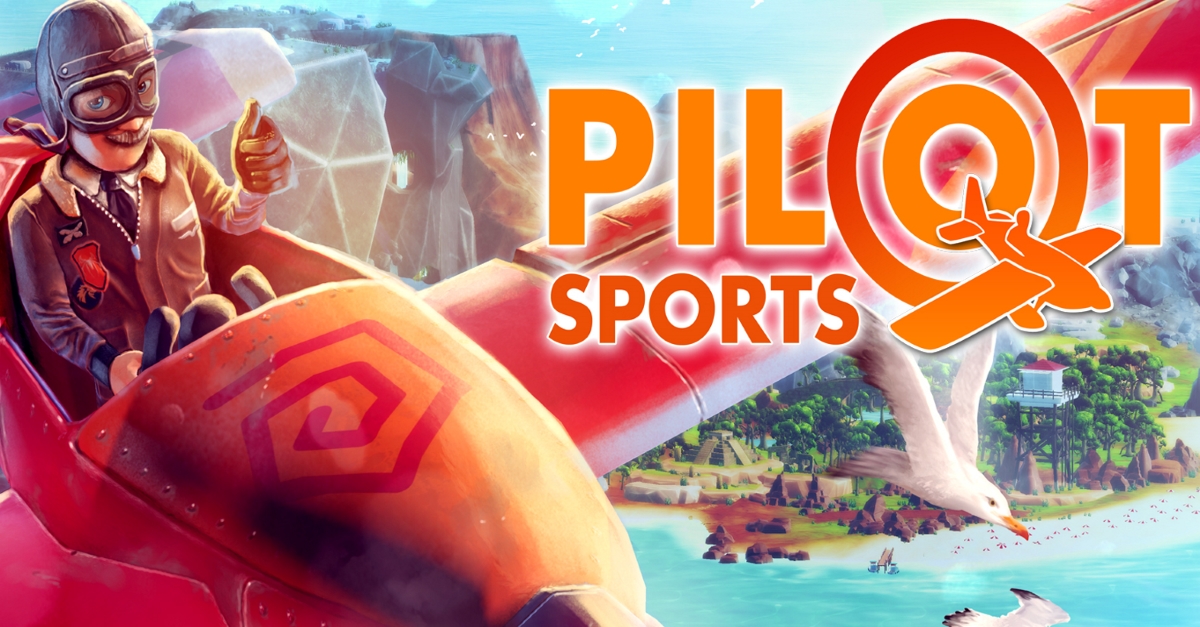 Let’s get straight to it – no, your eyes don’t deceive you. Pilot Sports is a blatant clone of Nintendo’s Pilotwings series that makes no attempt whatsoever to hide this fact, and it’s all the better for it.

For the uninitiated, Pilotwings is a 3D flight simulator previously released on SNES, N64, and 3DS. In it, you engage in various forms of aviation, typically while flying through rings and attempting to do so in the fastest time possible. Unfortunately for fans of the series, the series has only ever received new installments during console launches.

Pilotwings was designed to show off the Mode 7 capabilities of the Super Nintendo, Pilotwings 64 demonstrated the wonders of the third dimension on Nintendo 64, and Pilotwings Resort served as a showcase for the fancy new stereoscopic 3D feature for the Nintendo 3DS. As a result, while some might view this as a shameless clone with no originality, I say… who cares? It’s not like we’re ever going to get a legitimate Pilotwings on the Switch, might as well take what we can get.

Pilots Sports plays like a what-if scenario where Nintendo never made N64 and 3DS entries and instead made a direct sequel to the original in 2018. Just like in the SNES game, Pilot Sports offers four types of gameplay: light plane, hang glider, jetpack, and skydiving. While they all control very differently, you’ll be flying through rings, landing on platforms, or collecting packages no matter which one you choose.

The light plane’s handling is loose yet stiff at the same time and demands that you make good use of raising and lowering your speed to shave seconds off your time while making sure you don’t accidentally crash into walls. Hang gliding is a little slow, but making proper turns and gaining height off of nearby air vents can provide some of the game’s biggest challenges. The jetpack (better known to Pilotwings fans as the rocket belt) controls just like you’d expect, with thrusters activated at the push of a button, which gives you a floaty but satisfying sense of control. Thankfully, the improved camera in this game means that frequently pressing the R button to see what’s below you is a thing of the past. Skydiving is by far the simplest of all the activities, requiring little more than moving your character in every direction and pressing ZR to speed up, though sticking the landing with your parachute is just as nerve-wracking as ever.

There are 50 missions to complete, and in true Pilotwings fashion, your performance will be graded in every last one. Things start off pretty simple, but the difficulty swiftly ramps up by the third set of missions, especially since your plane, jetpack, and hang glider get upgraded with faster and more challenging variants. While your ranking can range from bronze to silver to gold, unlocking more missions demands you obtain a certain number of gold medals, so only the truly skilled will get to experience everything the game has to offer.

Unlocking all 50 missions also opens up “Free Range Mode”, a set of three special missions that technically have a goal to find a certain amount of collectibles but are really just a way to explore the island without a time limit. There’s also a fourth extra mission that’s a little… different… but I’ll leave that as a surprise for anyone who picks up the game. If you have friends handy you can even play the entire thing in glorious split-screen local multiplayer, something that even Nintendo’s own offerings have never included.

When it comes to audio, the music isn’t terrible – just kind of bland. There’s always the option to simply turn it off and listen to your own tunes (I opted for halc’s wonderful OCRemix album Pilotwings: Take Flight). Unfortunately, there’s no workaround for Pilot Sports‘ terribly amateur visuals. Hoo boy, this is NOT a pretty looking game. The character models are the biggest offender – these are some of the ugliest mugs to ever grace a video game. You thankfully won’t have to look at them much, but you’ll never get used to that creepy smile and wooden animation that plays when you select an avatar.

The island is equally gross, with muddy textures and a total lack of proper lighting that makes everything look fake and plastic. Given that the rest of the game is so fantastic, it’s disappointing that the team didn’t have the artistic chops to nail this bit. At least the upside of having cheap and low-budget graphics is that it runs at a solid 60 FPS at all times.

Lastly, we come to the aspect that is likely to be the most contentious: the price. You might expect to pay $10, $15, maybe even $20 for this type of game, right? Think again – expect to cough up a hefty $34.99 for Pilot Sports. The only upside to this outrageous price tag is that it’s almost assuredly a gimmick designed to make the game look more appealing when it inevitably goes on sale for half off, so as long as you can wait until then, you’ll be in for a good time.

Pilot Sports is easily a worthy successor to Nintendo’s own franchise, to the point where I’m basically comfortable accepting this as the next in the series until Nintendo themselves eventually decide to give the people more of what they want. However, I strongly recommend waiting for a sale unless you’re a Pilotwings die-hard, as the mediocre visuals and good-but-not-great amount of content certainly do not warrant its $35 price tag.