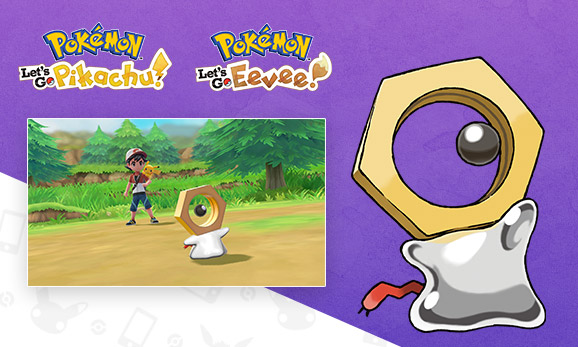 Last week, a couple of bolts come lose when a certain new Pokémon showed up out of the blue and started appearing all over the world thanks to Pokémon GO. Whenever caught, this bizarre creations, which looks like a grey Ditto with a nut on its head, would become another Pokémon and there was certainly a lot of confusion caused because of this ‘mon.

It’s time for that confusion to end however as the “hoax” is in fact an entirely new Pokémon and its name just so happens to Meltan.

On top of an official reveal and a new video which we’ll be sharing at the end of this article, plenty of details regarding Meltan have also been shared, and you can read them for yourself here:

A new species of Pokémon—one that nobody has ever seen before—has been discovered! This Pokémon is called Meltan, and as of now, it is quite the enigma.

Most of Meltan’s body is made from liquid metal, and its shape is very fluid. It can use its liquid arms and legs to corrode metal and absorb it into its own body.

Meltan generates electricity using the metal it absorbs from outside sources. It uses this electricity as an energy source and also as an attack that can be fired from its eye.

Clearly a curious Pokémon, Meltan is very expressive and shows an interest in all kinds of things.

Many reports have come in about sightings of Ditto in Pokémon GO that have transformed into Meltan. The number of sightings has significantly decreased over the past few days, but it appears these “Meltan” are still appearing in various areas.

Research is being conducted on these appearances of Meltan, but we have learned that Pokémon GO is somehow key to meeting this curious new Pokémon in Pokémon: Let’s Go, Pikachu! and Pokémon: Let’s Go, Eevee! We’ll be sure to provide updates as we discover more!

Now that Meltan is an officially Pokémon, what do you think of the little guy and is design? Let us know!