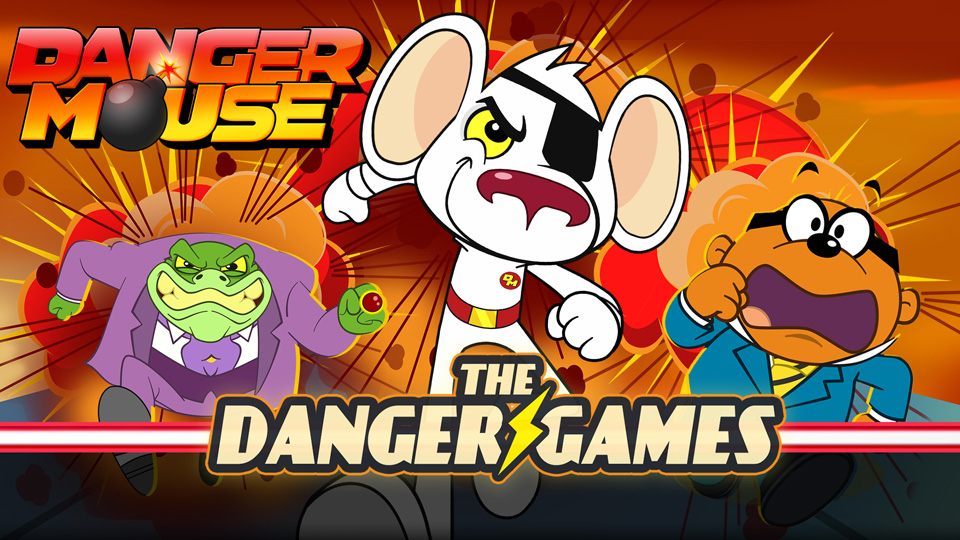 It’s Dangerous to Go Alone, Take a Friend or Three!

For those unaware, Danger Mouse is based on a kids BBC cartoon that stars the title character and his hamster sidekick Penfold as they rid the world of a variety of dangers. Danger Mouse was revived recently as a television show in 2015 getting three different series and dozens of episodes.

With the recent popularity of the show, it only made sense for the show and its colorful cast of characters to get their shot at the gaming market. Danger Mouse, an over the shoulder 3D racing game has been released in various forms as a browser-based game, as well as on the mobile app store. It’s now making the jump to consoles this fall with a release for Switch.

There isn’t much in terms of a story here though the game does center around several races in which your character must reach the end in first place to progress through and leveling up along the way. Leveling is based on wins which unlock new upgrades and races which will need to be played over and over again to continue the unlock progression of the game.

Along the various courses you will dodge in and out of lanes, usually, 2-4 lanes to be exact which are filled with obstacles like cars and robots, as well as, power-ups which can be used to increase your speed, disable enemy attacks, or rocket shoes which allow you to fly temporarily over your opponents.

At the start of each game, you choose a character and equip perks that you will find scattered in the race. Acquiring the perks is as simple as running over them and then using them in a similar way as Mario Kart question blocks. Many times the timing and use window for each item is short as there are perks scattered throughout the game’s levels and you can not stack them saving for usage for a later time.

Because the levels are short, around one and a half to two minutes, it’s easy to jump in and play a few rounds when you have some downtime. The game truly lends itself to quick short bursts of play, especially since there is a feeling of sameness early on as you won’t have many courses at your disposal in the early races.

As you play through you level up based on your placement in the race, 1st through 4th. With each race, you gain a variety of different points that can be used to purchase in-game perks as well as leveling up characters unlocking bonuses that can be equipped. The progression in the game feels a lot like an in-app purchase system of playing and gaining points and then turning around and buying upgrades. The only difference is you don’t need to spend real money in Danger Mouse to buy them on the Switch.

As I have had limited time with the mobile version of Danger Mouse I can’t say if the system is the same on mobile or if there is real-world money that you can spend on upgrades. That said, we do intend to write more about this, just as soon as the game releases, along with its cross-play support, so we can better test the two.

One thing that surprised me with Danger Mouse is the amount of content and customization to your character outside of the races you can do. The game takes a racing formula similar to that of Temple Run and adds in a multiplayer aspect that I haven’t yet seen yet and adds in a level of customization found in games like Call of Duty where adding perks to your character can change how you race.

What I mean by that is that before you race you choose a character each with varying top speeds, the rate of acceleration and a few other stats and couple that with abilities that you will be able to use on the field. Think in a similar way as in Mario Kart and choosing your character (weight), kart, and tires; but with the addition of only having certain items used in each race. That slight change to the racing formula adds a unique dynamic that while racing against other characters can drastically change how you play.

Along with the variety of content abilities for your characters, there are various races that add mechanics that act as mini-games during your race. Some of these will affect everyone, like piles of jam on the ground which slow you down and require button mashing to forge through or present boxes which require you to move the joystick in a certain way like in a rhythm based mini-game. These mini-games were enjoyable for my children since they liked the timing breakups of running and dashing mixed with timed based games or button mashing.

Danger Mouse’s race levels each had their own short track of music to accompany the races which were upbeat helping to goad you along as you jumped, dashed, and flew through each race. None of the music really stood out to me as great or memorable but they did add to the tension as you moved to the end of each race.

The audio in the game was a mix up of item based tunes when you used something like rocket shoes or a bomb through the sound made sense. But again nothing stood out as memorable. I’ve never seen an episode of Danger Mouse so I don’t know if the sounds were lifted from the show. Most of the audio was superficial sounding at best.

There are in-game quips from all the characters that you will hear, especially if you pass someone or are able to hit someone else while racing with one of your items. This banter was a welcome addition to the games otherwise sterile sounding playthrough, but nothing was ground-breaking in that regards.

As a thirty-five-year-old, I can tell you that Danger Mouse has no appeal to me. The show was not something I grew watching or have seen with its 2015 renaissance. My children, 11 and 8-year-old girls, however, are enamored by the game and have lorded it over me even since their characters are faster and stronger than mine and have been able to beat me in nearly every race we have played.

As a father, it’s important to me that my kids love and appreciate video games as I did when I was their age. Having a game that they are good at and have easily picked up and been able to understand is a testament to good design and simple understanding that even a kid can learn and know.

While playing Danger Mouse both in handheld or docked we never encountered any unusual framerate drops or crashes. The game plays smoothly over online as well, which we were able to test out since we had two copies of Danger Mouse and two Switches.

There isn’t a way, at least from what I could see, to choose a match with a Switch friend, in that way, it’s a lot like Splatoon 2 in how the matchmaking works. There is a chance that you would be placed in the same room as someone you know but we encountered more randomness to the pairings in our initial playthrough. I have not seen any kind of private room or search for friend feature, but hopefully, there is an update soon to include that in a post-game release update.

Danger Mouse is a game that is geared towards young kids between 6-12 years old, and in that regard, it does what it sets up to do well enough to be a good buy for parents looking to entertain. The game plays a lot like a mobile endless runner game, similar to Temple Run or even Mario Run, but in 3D lane-based courses. The races are short, the content is varied and deep, which to me was surprising. Danger Mouse isn’t going to hold over those looking for an online team racing game or local co-op game, but it will suffice for short bursts of enjoyment.

The Bottom line is, my kids loved the game and were better at it than me. The controls are simple and easy to pick up, leveling up your racer and equipping them with perks is fun and engaging. Just know that the demographics for the game skew to the younger crowd. Knowing that going in will help temper your expectations.