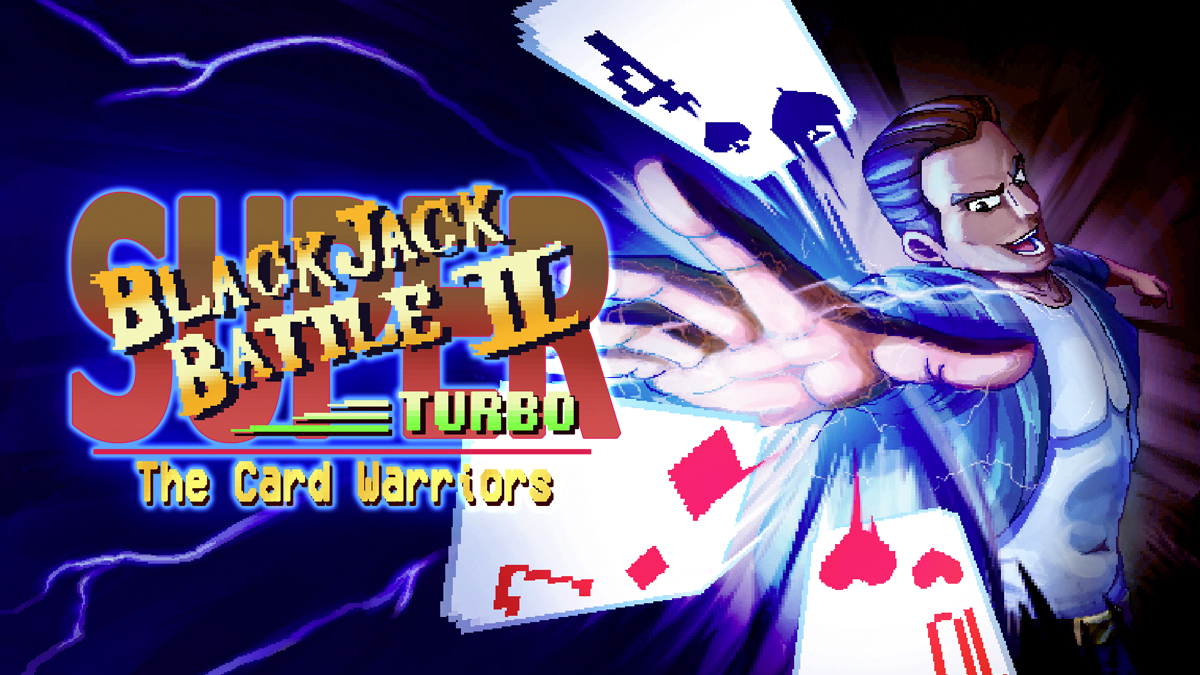 If you ever found yourself wondering what Super Street Fighter II Turbo would have been like if it was a game about blackjack, as opposed to fighting, the answer would most likely be Super Blackjack Battle 2 Turbo Edition – The Card Warriors.

Developed as an original title by Stage Clear Studios and published by Headup Games, Super Blackjack Battle 2 Turbo Edition – The Card Warriors graced the likes of Steam with its presence on March 3, 2017 (the very same day that saw the release of the Nintendo Switch,) and is described as being a game that pays tribute to a “well-known fighting game from the ‘90s.”

As a game all about blackjack, which features an endless mode (Simply Blackjack,) where you can just keep going until you lose all of your credits, the actual gameplay is minimal. Each round begins with you placing a bet, cards are then dealt with the opponent player’s cards revealed to you and you can then choose to Stand (stay with what you’ve got,) or Hit (draw a card which could help you edge towards 21, or go beyond it and lose.)

In the event you’re playing Single Player Combat though, you can also choose to double down and wager even more money. You will also have to play through 10 rounds against an opponent, whom you don’t need to outright take all of their chips to beat them, but you do need to at least finish the game with more cash then they possess.

In the event you happen to gamble away everything you have and lose, you will be defeated and forced to endure a bit of trash talk before choosing to continue and try your luck again, from the beginning of the fight. Should you be the one who emerges victor when the 10 rounds or over, or your opponent, (1 of the games’ 12 characters,) loses everything sooner, you get to trash talk them in return.

Pretty much, the gameplay is what you would expect from a game about blackjack and yes, Splits are available, as is a bigger payout when you happen to find yourself with blackjack (an Ace card and any card that has a value of 10, such as 10, Jack, Queen and King, regardless of suit.) The battle aspect is even compelling a little bit, especially the trash talk, but the reality of the Super Blackjack Battle 2 Turbo Edition – The Card Warriors battles, is they are lacklustre at best.

Half the time of playing Super Blackjack Battle 2 Turbo Edition – The Card Warriors, I didn’t even have to try and beat my opponents as I found I was able to win a match, just be beating $50 every round, as the AI opponent would beat wildly and make themselves come undone by their own hand.

Sure, sometimes it would be them who emerges the victim, thanks to winning big, but the AI could do with some serious balancing as they come across as being more foolish, as opposed to unpredictable and no, the fact that you can press R whilst playing to do an emoji, does not justify the poor AI Super Blackjack Battle 2 Turbo Edition – The Card Warriors has to offer.

However, if such a thing does not deter you, maybe you’ll stick around for the characters themselves. Each one has a backstory, there are 10 that you can play through Single Player Combat with and, not only do they have their own piece of trash talk for every character, but they have their own motives as to why they need to win the 11 fights. Only the very best will be able to jet over to Vegas and showdown against the Godfather Tony.

As for the 2 characters you can’t play as during the story, they can be used in Simply Blackjack, but you will need to unlock them with one requiring you to beat Don Santos with Mark and the other requiring you to gather a total of 100,000 chips.

Having played through the story a couple of times, it didn’t take long before the mode got a little too repetitive, but for those who do lose interest in Single Player Combat, there is still a Party Mode that up to four players can play together. It follows the same rules of gameplay as presented in other modes, but all of the action is presented on one screen and everyone takes it in turns placing their bet and making their move.

Party Mode can get a little long-winded at times, but as far as Super Blackjack Battle 2 Turbo Edition – The Card Warriors, it is the best feature the game has, but even then that’s not really saying all that much.

I like Street Fighter and the devs did a good job of recreating most of the game’s essence, but even though this is a Switch title that costs just $7.99, it is a bit of a hard sell to recommend it as being a game that players should go all in for. It’s a nice package and a decent game, but I can’t help but wished it had a little more to it to justify investing more of my time into it.