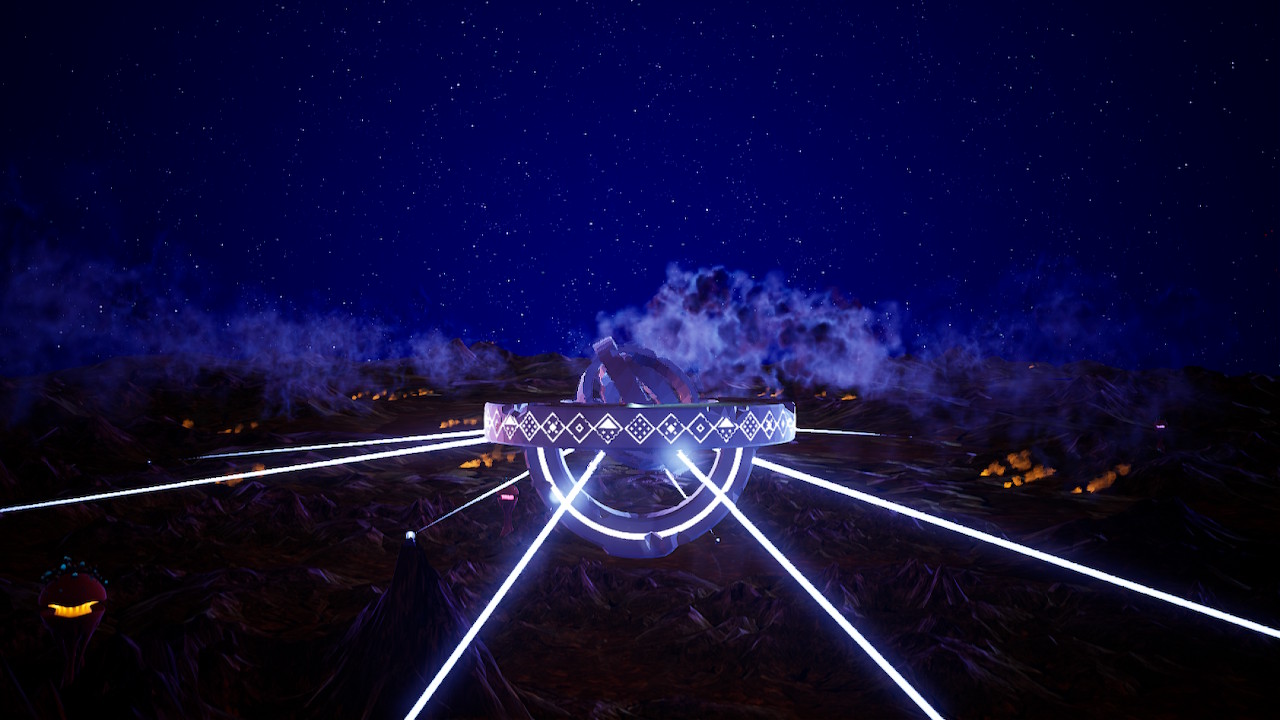 September 8, 2018 1:56 am Published by jonathanober Leave your thoughts

It’s a Dangerous Planet to Explore!

Team17 has been a big proponent of Switch indie games and released quite a few gems in the last year and a half. Now comes Planet Alpha’s turn as Team17’s 100th game release (not all of them are on the Switch). Planet Alpha was released concurrently for PC, Xbox, PS4, Switch, and Steam in September 2018.

The game starts you off as a lonely survivor, awoken to an alien world. You start off in a gorgeous opening sequence that displays a day/night montage of various locations on the planet as members of the design and development team scatter across the sky. In the beginning, you only have left and right movement and a jump button. There is an immediate sense of scale and wonder, as well as claustrophobic loneliness as you embark on a journey across biomes, avoid hazards, and encounter strange robots on the planet

As you journey through your hours on Planet Alpha you soon learn about how you can interact with the environment through moving pieces of stone that have fallen from the structures around or been impacted by some of the scavenging robots. These stone pieces are sometimes used to open new paths of exploration, add a jumping off point for some of the games platforming sections or create distractions to robots so you can maneuver around them undetected.

As you progress through the world you learn about the ability to cycle through day and night. This new ability helps in several ways like solving puzzles that require you to line up planets in the night sky or changing the fauna around you to creating platforms or closing up so as not to harm you with their poison.

Often times the slight change from day to night has huge ramifications moving pieces of the planets mechanized landscape, slicing through rock or robot adversaries, other times it may be used to open a flower that distracts a killer insect from being in your path.

Once the mechanic of day/night cycling became second nature you find yourself in a balancing act of moon and sun feeling almost godlike as you nimble around the landscape. There are sections of the game that require precise ordering of the cycling to open up pathways and change enemy locations creating a unique puzzling element that I really enjoyed.

The other main gameplay element comes in the stealthier sections which required more timed movements, left or right, up or down, through fields of scout robots searching to seek and destroy. I didn’t mind those sections and since they were spread over the campaign they were often welcome additions to the typical walk left to right your character would often need to do.

There are other sections in the game as you traverse through what seemed at times a towering world of skyscraper-like ruins, some of which have platforming sections reminiscent of a Zelda or Mario game that had blocks moving in and out ready to ram you off into the abyss. I never really died in those sections as the timing was easy to figure out, but those moments still had their stresses.

There’s another section about midway through the game that has you scaling the walls of a ruined out structure. As you are move left and right and vertical, climbing up walls that have vines on them, there are giant tentacles with pinchers on the ends set out to grab you and throw your body to the ground. The way they track your movement and attempt to snatch you was one of the tensest moments in the entire game.

The other main character of the game is the world itself and how you will interact with it and move through it. The game has lush green fields filled with color plant life and larger than life animals. In one area of the game, you are on the floor of the jungle and surrounded by four-legged creatures that look like the alien planet’s version of a brontosaurus. In that area, you have to avoid their giant hooves and make it past several of them before advancing through the level.

Planet Alpha has a dramatic orchestral soundtrack that ebbs and flows with the sections of the game. The music often helped to portray my feelings of being on an epic journey through an alien planet and seeing things I had never seen before. There are sections of music that almost feel silent and ambient helping to showcase the darkness of the underground or jungle floor and the loneliness you have as you rummage through ruined buildings of a people from long before you.

The sounds of the game come in the form of creatures which hey and haw, grunt and groan, and flutter about. Some of them engage and attempt to attack your character usually giving a startling sound or battle cry as they swing their tail, or stomp the ground. The sounds while subtle do a lot to impart that sense of scale and hazard in regards to larger animals and those that want to attack you.

As I mentioned earlier, there are robots on this planet also patrolling and looking for you. There is also an added sound to the robots as they spot you which can alert you to if you are drawing suspicion or alerted other robots in the vicinity. Sometimes you need to alert and distract the enemies by entering into their red line of sight and causing them to follow you into harm’s way like the oppressive stomp of a gargantuan brontosaurus-like alien. There are a few satisfying sounds like the exploding electricity pop of a crushed robot or a successful puzzle solved that really stood out to me.

I played the game almost exclusively on my new 43” 4K display and while I know the Switch is not 4K the TV upscales the game and looks really, really good on it. The vistas move fluidly without a hiccup or drop in framerate even when there were large mammoths or scorpion creatures coming in and out of the background.

I went into Planet Alpha not knowing much about the game or its story. I had only seen a brief trailer of gameplay footage and because of that my expectations were more on the spectacle of the sprawling landscapes and varied jungle and underworld sections shown in the trailer. As I began to play and feel isolated during the opening crawl through the opening credits it was clear to me that this game would be very different than anything else I had ever played.

The only close comparisons I can make are that Planet Alpha feels like the journey to the center of a world ripped from the 2D Metroid series with some timed jump puzzles and sneaking sections more akin to platforming in a 2D Mario game. The world is colorful and vibrant, but also at times desolate and dark dripping with character and creatures that will startle and amaze you the first time you see them.