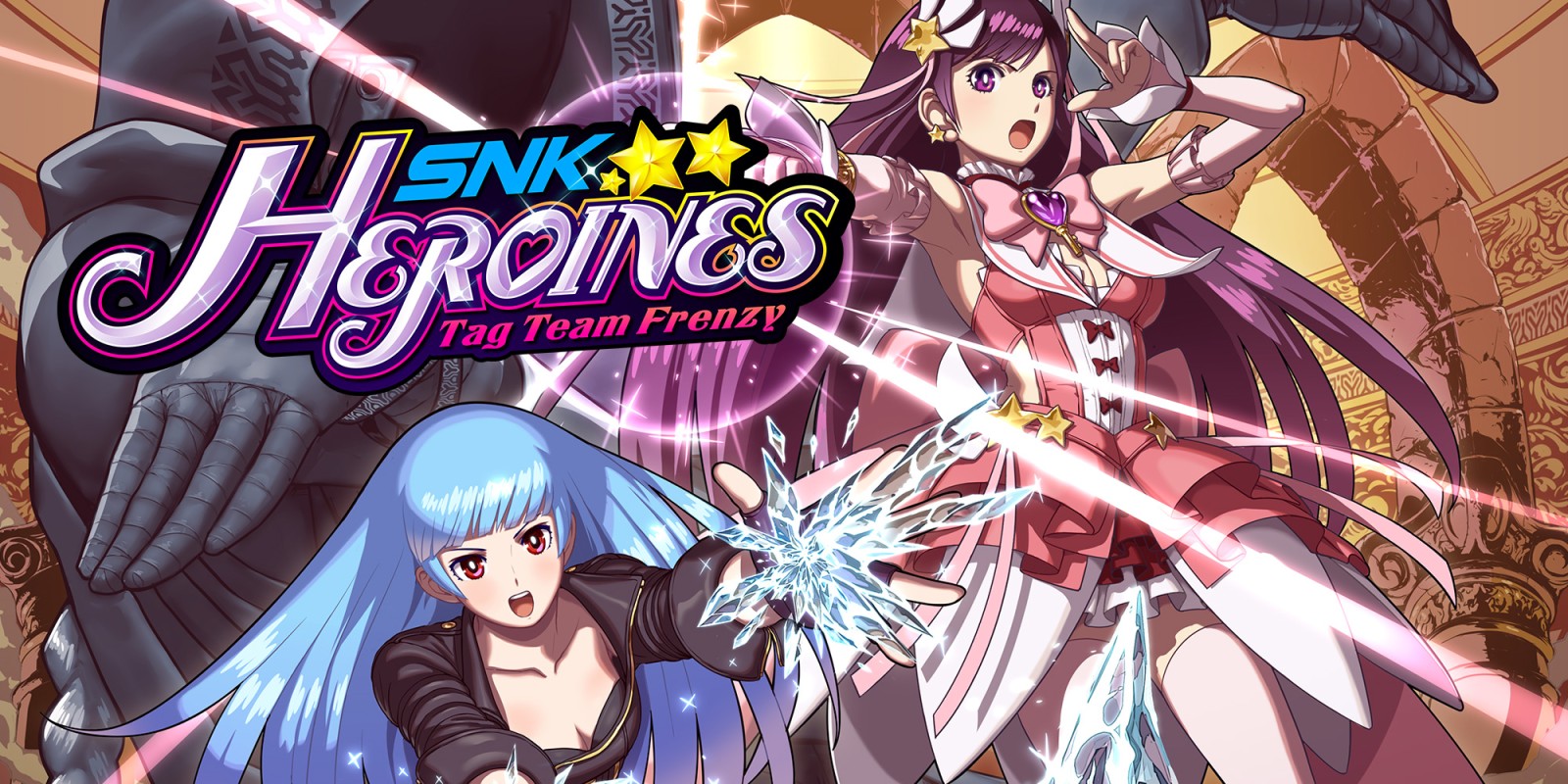 Fanservice will only get you so far.

Just in case there aren’t enough fighting games available on Switch already, with more continue to grace the platform with their presence, such as DRAGON BALL FighterZ on September 28, there is another which has a more imminent release.

Launching this very week, comes the eagerly awaited SNK HEROINES ~Tag Team Frenzy~, a self-described 2D “2-on-2 Tag Team Fighter” that just so happens to be “not your everyday fighting game.”

On paper, it sounds like a great read, especially when you consider the fact that the 14 fighters it comes with (with more to come via DLC such as Thief Arthur,) all hail from the likes of SNK’s: Art of Fighting, Fatal Fury, Samurai Shodown, and The King of Fighters, but how does its execution of the concept fair? That’s precisely what we’re going to find out!

Developed by Abstraction Games, with SNK (Shin Nihon Kikaju,) in the driving seat as the publisher of SNK HEROINES ~Tag Team Frenzy~ in Japan, this new fighting extravaganza is definitely one to turn a few heads. Not only is it a game that lives up to the Heroines in its name, by having every playable character be female, but it’s even given the likes of Terry Bogard a sex change so that he too can be a she and that’s just scratching at the surface.

On top of all all-woman cast, SNK HEROINES ~Tag Team Frenzy~ sees to it that the female fighters we have come to know and love, are dressed in a custom we’re not quite used to. Although they standard garb is present as a third custom that players can purchase, their default costumes are anything but standard.

Instead, their garb is of a sexualised and scantily-clad nature, thus resulting in Nakoruru looking like a raunchy vampiress, whereas Mai Shiranui sports a cow-themed bikini, complete with tail, cowbell, horns and ears. As for Love Heart, the pirate now appears as if she were an exotic dancer, dressed as a woman police officer.

Other than being fanservice (“giving the fans what they want”) and making every character into eye candy, there is another reason why they are all dressed in the way that they are and it is partly due to the game’s story.  A story which can be summed up rather easily.

Essentially, before they are meant to compete in a The King of Fighters tournament, the female fighters in SNK HEROINES, awaken in a bizarre mansion, in attire they are not used to and are forced to fight. The game’s main story campaign solely consists of 7 battles in which players must complete but is lengthened by the fact that dialogue and cut-scenes vary, depending on who you choose as your main and who they are paired up with. (Incidentally, should the player fail to win a single match, they can choose to continue, or quit and start over with someone else.)

Players can choose to play through the story mode just the once if they wish, but it will come at the risk of them failing to complete the game, as every video scene is added to the game’s gallery, although in all honesty, if you have enough coin, you can always buy the videos you’re missing.

Something else you can spend your money on is via the Customise mode. With it, players can choose between all available fighters and purchase new costumes, desired accessories that consist of Head, Face, Face Paint, Back, Hips, Hands and Legs. You can also purchase new voices, background images, frames, stamps and even poses.

To attempt to buy everything can be an incredibly costly process, but there is so much customisation to this game and available options, that you can truly go nuts and make each character your own. Heck, you can even change a character’s line of sight, mouth expression, eye expression and even their general expression.

Only once everything meets your satisfaction, can you then save your customised creations and even use them as your chosen avatar. But we’re getting a bit ahead of ourselves because what could is spending money, if you have yet to earn it? So, in order to earn it, players can actually earn gold by playing the game in all its forms.

By undergoing the game’s tutorial, a nice bit of gold can be earned from every lesson, as can gold be earned by playing through the story, versus mode (battles against CPU or players,) online, locally with others provided you both have the same version and survival. (With survival players must fight waves of CPU opponents and can be played with 2 player co-op.)

Still, just because there is no shortage as opposed to how to earn coin, in order to even earn it, you will be required to fight. As expected, tutorial is a good way to pick up types up tricks, but there is also a training mode where players can decide on how their CPU opponents will act so that you can train against them.

Having said that though, SNK HEROINES does feature simple controls, so most of the time, you will only ever need to concern yourself with using the left analog stick to move, Y for delivering weak attacks, X for strong attacks, A for special attacks, B for a throw, L for guarding and ZR for tagging.

Being a game with “Tag Team” in the title, nothing in SNK HEROINES is a one fighter ordeal, as players can choose fighters, with one being an “Attacker” and the other being a “Supporter.” Your attacker is your main fighter, but by tagging out, you can play as your other character and also lay down the hurt. It can often be a necessary step that can help you win, especially when the only way to defeat an opponent, is by using a Dream Finish move with R, when an opponent’s life is in the red, to perform a Dream Finish. (Cue an excessive animated attack.)

Unlike in most fighting games though, your favourites share the same life bar, so there is no advantage to swapping if you’re doing it for more life, but the Supporter’s Spirit Gauge does fill up quicker and the Spirit Gauge is required for performing both kinds of Dream Finish moves (your standard R one and one that requires the analog stick pulled down in combination with R.)

But, just in case your skills at fighting are not enough, and you find yourself having to reduce the difficulty setting of your CPU opponents, items can also help to turn the tide of battle. While some are “inherent to certain characters,” depending on what you have, they can be a bomb you drop on an enemy, a potion to recover life, a banana skin and more.

Most of the time when using your items, you need to only concern yourself with pressing the right analog stick in any direction, but with some items capable of coming in from either side, sometimes the best direction you can move the stick is right or left, so always pay attention.

All that aside though, although SNK HEROINES is something of a beautifully animated title with character designs that some fans will adore, and fighting moves that will take you by surprise, especially the throws, but the action is lacklustre.

Sure, it can be a very titillating game like it is meant to, but there are times where it just feels flat out like the game is more about the actual characters, what they’re wearing and all the manner of ways you can customise them, as opposed to being a fighting game that puts being a fighting game first.

Should that notion fail you put you off however, and you’re keen to make the most of the Online mode, you might find something that will take your fancy thanks to Gamble Battles which allow you to make bets and either win a considerable sum, or lose all that you foolishly gambled. You can also engage in quick battles, create rooms and you’ll never have to worry about your progress going unnoticed, as SNK HEROINES is all too happy to keep note of your antics.

From paying attention to your favourite fighters, whom you like to pair them with and even just how much of the game you have completed, with regards to its collectibles, you’ll never be at loss that’s for sure.

What I will say however, despite the sexualised nature of the game, should you be able to look past it and put up with what it offers in terms of fighting, SNK HEROINES is one of those games where you more you put into it, the more you out of it. So, unless you’re willing to go all in, or even half in, you might just be better of investing your attention in the likes of Blade Strangers and FighterZ.

Although it is the intention of the developers to have SNK HEROINES ~Tag Team Frenzy~ be a “fighter game with simple controls,” I actually found the game to be a little too simple. It’s nice that anyone can pick up and play it, but regardless of how the game looks, performs and how in-depth the customisation goes, at the end of the day, it is meant to be a fighting game and not all fighting aficionados will be pleased with the laid-back combat it offers, regardless of available difficulty levels it offers.