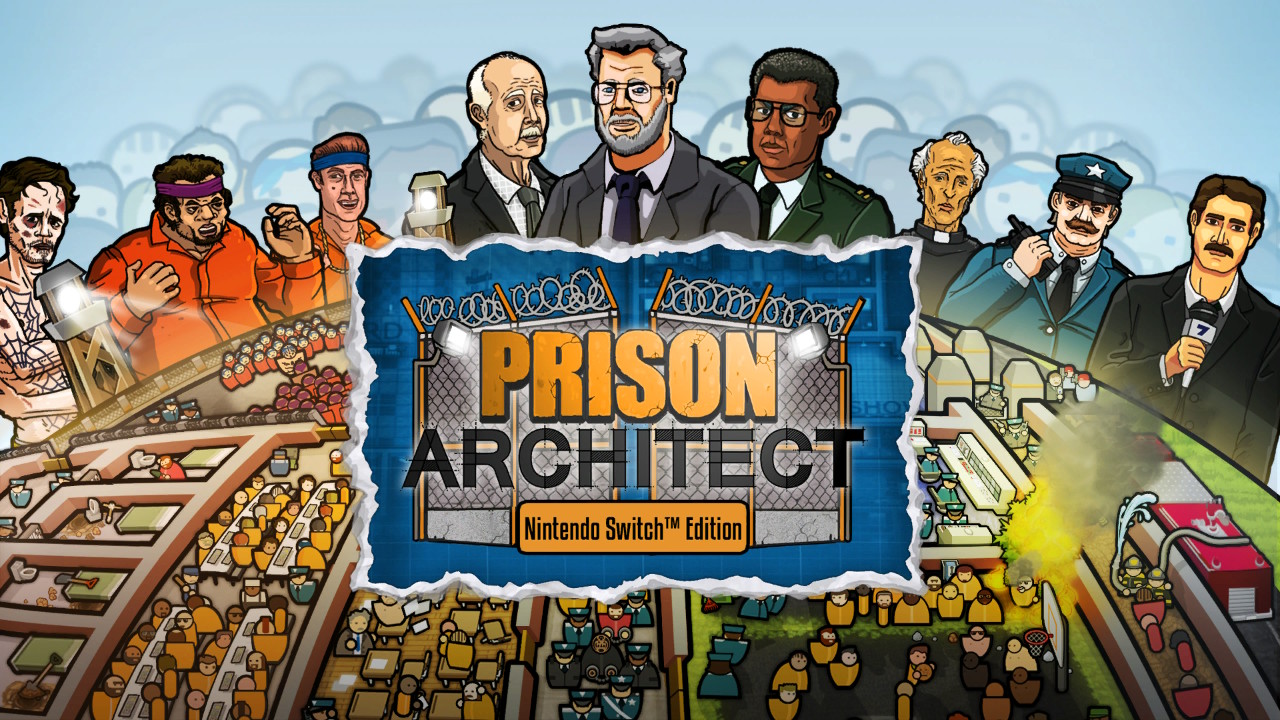 Serving 20 years to life as a Building Contractor.

Starting out as a PC original title back in 2015, Prison Architect was later released to Xbox and PlayStation consoles. Now the simulation game, which has you managing multiple facets of building and maintaining a prison has made its way to Nintendo Switch. The Switch version contains the original game that was released to consoles as well as the new World of Wardens sharable content area.

On top of that, there is also previously released DLC included in the Switch Launch: All Day and a Night and Psych Ward. There is a DLC pack “Escape Mode” which will be released on August 31 for Xbox and PlayStation, with the Switch set to receive it a few weeks after its launch.

The Prison Story campaign mode is a tutorial in a way that helps teach you the ropes of managing your own prison. During the campaign, you’ll follow the story of the Palermo family and their criminal world. Within the sectioned off levels you will learn how to build structures, set up programs for rehabilitation, manage prisoner’s needs and wants, hire employees and more.

The story is short, but it leads into the meat of the game, which is the prison simulation mode. This sandbox mode gives you the tools you need to build a prison the way you want. From there you can choose to be as soft on your prisoners giving in to their needs while taking a financial hit along the way or play it tough handing out severe punishments for behaving badly or being caught with contraband.

If you want to have a lot of fun with Prison Architect you will need to manage a multitude of deep systems and give and take whenever necessary to avoid riots, fires, and murders within your prison walls.

There is a deep level of commitment you are needing to have in seeing your prison through to the end. As you lay out your buildings you will need to make sure that there are connections to electricity and water. You will need to set up holding cells and individual rooms for your prisoners as you create larger and more complex spaces.

One time I found myself forgetting the simple quality of life measures like TVs, radios, and clean showers. Soon I had to deal with prisoners rioting and setting the kitchen on fire. If you don’t manage all of these systems it can get very overwhelming.

Prison Architects’ uniqueness comes from its elaborate system and how you want to play things out for the prison you are building. I found that sometimes I wanted to make as much money as I could and would forego those previously mentioned qualities of life measures, and opt for more common room spaces to give recreation times for my prisoners.

This often led to more fights, so in turn, I would manage schedules of the prisoners giving some of them more free time than others. I would also utilize the lockdown measures to ensure my guards could manage the number of inmates we had, as well as, staging regular searches for contraband. If there is one thing that Prison Architect does well is it’s within the plethora of options it gives you and a “yes you can do that” mentality.

The game doesn’t really have a noticeable arrangement of music it throws at you. There are some bits in the story that have background music which plays only to set the mood, but other than that it’s mostly repetitive but often lost in the shadows style music more reminiscent of elevator or waiting room music.

Now, although Prison Architect doesn’t have much if any, in-game dialogue audio, most of what you will hear is the ringing of the phone from the CEO as he gives you tasks to complete or the grunts and groans of inmates as they move around the prison yard.

The sounds that were the most noticeable for me were the sounds of my kitchen burning as the flames crackled and the sounds of emergency equipment taking care of injured prisoners. Nothing fancy, but the audio did the job in giving me a sense of what was going on in the prison.

Still, Prison Architect on the Switch is not without its shortcomings. One thing that I really was hoping we would get with the Switch port was touch controls. I feel like strategy games that have a lot of menus to select through would benefit greatly from them, but the Switch port receives nothing of the sort.

I found the on-screen cursor controls to seems a bit stiff at times and then floaty at others. I often found it odd how they never seemed to snap correctly to something I wanted to select or other times would just drift a bit further than it seemed I had pressed.

The text in the game is also a bit hard to read since it’s so small. This is only emphasized more in handheld mode. There’s a lot of information that Prison Architect expects you to take in and having that displayed all on the Switch’s tiny screen is often a bit overwhelming.

Aside from these things I never noticed any slow down or dips in framerate. The game would often move along fine enough even if there was a ton of construction going on or a fire or riot. I never experienced any crashes or bugs either in my game playtime.

Prison Architect stands as one of the most engrossing simulation opportunities on the Switch right now. The single player campaign does a great job of being the tutorial for the games sandbox mode. There are endless possibilities of creations to be made and I am certain that no two prisons will turn out 100% the same. The game’s menus and mechanics can feel overwhelming at times and off-putting to many, but if you stick with it you can choose how you want to rule your prison.