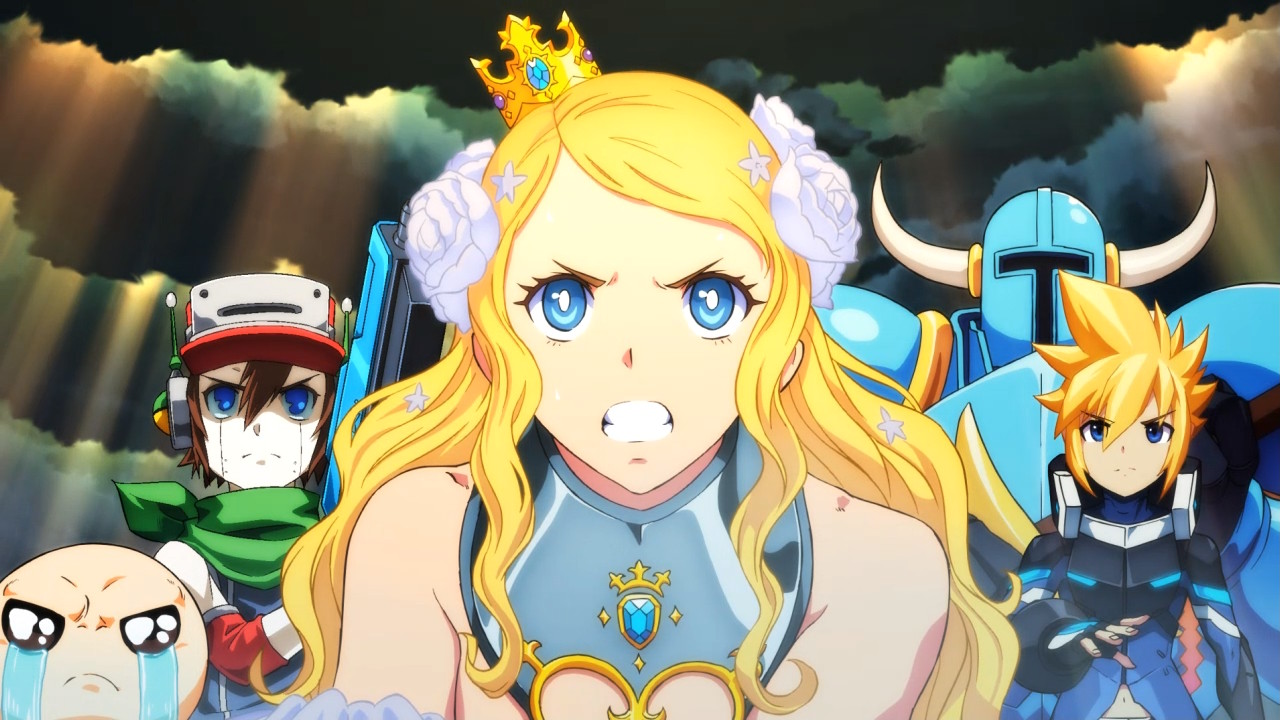 Announced during June of last year, Blade Strangers is one of, if not the most highly anticipated game that Nicalis has to bring to the Nintendo Switch, PlayStation 4 and PC and there are a number of reasons as to why that is.

For starters, it is a 2D crossover fighting game that pays homage to fighting games of old, whilst at times coming across as an indie version of DRAGON BALL FighterZ. It may not have the same depth as the later, but Blade Strangers is a fighting game that comes packed with interesting cut-scenes, flashy special attacks and a battle system you can jump right into.

Naturally, it helps if you take the time to learn the controls, so you can pull off the more fanciful moves and devastating combos, you’ll do just fine, but as long as you have history understanding of how fighting games play and love to mash buttons, you should still be able to breeze through the easy difficulty.

Why, yes it is! Released last month in Europe and North America, Code of Princess EX is a Nicalis published remaster of Code of Princess and it’s actually quite the RPG. Not on the same scale as Ys VIII: Lacrimosa of DANA, but it’s still enjoyable nonetheless. But, just how is this relevant?

Well, Code of Princess was actually popular enough that fans did want a sequel and although it was said there were plans for one back in 2013, a sequel has never happened, at long last a continuation of some form has arrived. Sharing the same developer isn’t the only thing Blade Strangers has in common with Code of Princess, as it even shares the same heroine.

Yes, that’s right, Solange Blanchefleur de Lux, princess of DeLuxia is back and she’s still equipped with the sacred blade DeLuxacalibur. On top of being highlighted as the main leading lady and appearing in a number of Blade Strangers gorgeously animated cut-scenes, she’s also the first of the game’s 14 playable fighters. She’s not the only Code of Princess character making a comeback either as she is also joined by Ali, Master T and Liongate.

As for the third reason to be really excited about Blade Strangers, it has a little something to do with a character called Shovel Knight. (Okay, I lied. It has a lot to do with him.) While Yacht Club Games’ protagonist may have only secured a role in Super Smash Bros. Ultimate as an Assist Trophy, in Blade Strangers, he’s a fully playable fighter, who just so happens to be an ultimate badass.

Still, he’s not the only legendary indie character to secure a place in Blade Strangers, as Inti Creates’ own Gunvolt is playable and so are 3 other characters, who have appeared in games Nicalis have helped bring to the Nintendo Switch. From the infamous The Binding of Isaac: Afterbirth+ we have the crybaby/titular Isaac himself and there’s a double dose of Cave Story+ thanks to Quote and Curly.

In fact, as far as the 14 characters go, only two of them are actually original, with one of them (Lina,) being the main antagonist from the story mode and looking like a character straight out of Xenoblade Chronicles 2. Whereas Helen, the other original character, is a Goddess inspired by Greece Mythology.

But for the sake of covering them also, the 3 characters I have to mention, are Kawase, Emiko and Noko, all of whom hail from Sayonara Umihara Kawase. Only Kawase is the protagonist of the Umihara Kawase series of video games, and has appeared in earlier titles as well.

With regards to the reason why this motley crew are all banded together in a single game, the story mode has the answer to that. In a world where a destructive being known as Lina, is devouring data left, right and centre, an organisation of “sentient computers” must pull heroes from various worlds and have them compete in a world championship fighting competition.

Should a single victor prove themselves worthy and defeat every challenger, they can awaken as a Blade Stranger and come to the Motes aid (Motes are the name of the sentient computers) and put Lina in her place. Where players might feel let-down by this mode however, is the fact the story is short as they will only need to win 7 fights to beat it and see the game’s credits.

Only, beating it once is not the end as there are a number of benefits to beating it ad they consist of unlock more characters to play through the story mode as, experiencing the full story as on top of the main story players are first presented with, there is also Lina’s story, and a story that revolves around the Motes’ Plan B. You can also unlock another colour skin for the character you beat the story mode with. So, if you wish to get each available costume, you will need to beat it 14 times.

How you choose to complete it though, is up to you, as you can choose from the available characters in any order, as well as deciding on how many rounds each fight are made up of, set the duration of each round and even decide on your preferred difficulty setting. (Very Easy, Easy, Normal, Hard and Expert/Very Hard)

Regardless of what difficulty you choose to playthrough, should you meet your end against a superior foe, you will have the option of continuing or quitting, so if you wish to continue, be sure to hit the + button. I must say though, playing Expert with just one round to prove yourself in each fight, is a lot of fun and not without its own difficulty.

Still, as short as the story mode is, even when play through it as each character once, Blade Strangers is not a one trick pony as there are plenty of other available modes for players to try their hand at, but we’ll get to them shortly, first let’s actually talk about the controls.

Being the old school inspired fighting game that it is, it does have a “streamlined four-button control scheme” (Y for Light Attacks, X for Heavy Attacks, A for Skill Attacks and B for Unique Attacks,) for beginners to come to terms with, but for veterans and seasons pros, Blade Strangers has a lot to offer. From grabs, to counters, recovering from a downed state and pulling off unmerciful combos, there is everything to play for.

Thankfully there is a tutorial mode that will walk you through it for the most part, and help you get to grips with everything covered above and things like shielding, the Heat Up icon, and Heat Up Time (a temporary powered up state that can give your fighter an edge.) But, if there is anything you feel it doesn’t prepare you for, there is an in-game menu that can help with that.

Once you feel you have learned all you need to though, players can then head over to Missions, which is made up of Survival and Challenge and prove their worth. In survival, you must select a fighter of your choosing and take on all challengers without dying. In Challenge mode however, you must perform very specific combos, which when mastered, will put you in good stead for when playing online.

While online wasn’t a big deal in the old days of fighting games, as local is all you needed, it is a huge part of the gaming scene today and in the case of Blade Strangers, a welcome addition. Should you wish to avoid League Matches, for you are worried about losing and having it affect your league and character rank, there are always stealth and casual matches, or you can just stick to playing with a friend and playing Versus, which can be found on the main menu.

Incidentally, for Versus mode you don’t even need a Player 2, as you can just as easily play against the AI and get to select the stage you wish to fight on and with every character having their own distinct level, you will at least want to check out each one once. But if you feel there is no point doing a single spat of Versus against AI, you can always do Arcade mode and challenge the AI there.

Still, if after all of that, you feel like Blade Strangers is still lacking in substance, and you need to be able to get something a little more out of Blade Strangers than distinctive fighters who have a move-set befitting the games they come from, some absolutely gorgeous animation and levels designs, and fantastic Japanese voice acting, then it’s a good thing Blade Strangers has one more thing to offer.

Not only does each character have up 8 different colour palettes, with the majority of them needing to be unlocked, but players can also earn titles faces, to be used as part of their profile for playing online. Talking of profiles though, there is also a Profile feature in the game, which keeps track of players various activities with each character and how they’ve got on, whilst playing online.

Now, the really interesting thing about Blade Strangers though, is despite its many, many positives and fantastic performance, there is one thing that nags at me. Given the things players can earn and unlock, especially new characters in story mode, it would actually have been nice to be notified of getting something. Just a little message to say I’ve unlocked Shovel Knight, as opposed to having to select story and look through the character roster and see if I’ve got him or not. But minor annoyance or not, the lack of notifications are not enough to deter me from playing it.

Blade Strangers might not be the Code of Princess sequel fans have been waiting years for, but it is a game that allows us to embark on a second adventure with Solange, put Shovel Knights shovel to good use and give Isaac something to cry about.  It is a fighting game that handles like a dream, whilst being approachable to players of all levels, but most of all, it is the “2D crossover fighting game” we all hoped it would be!