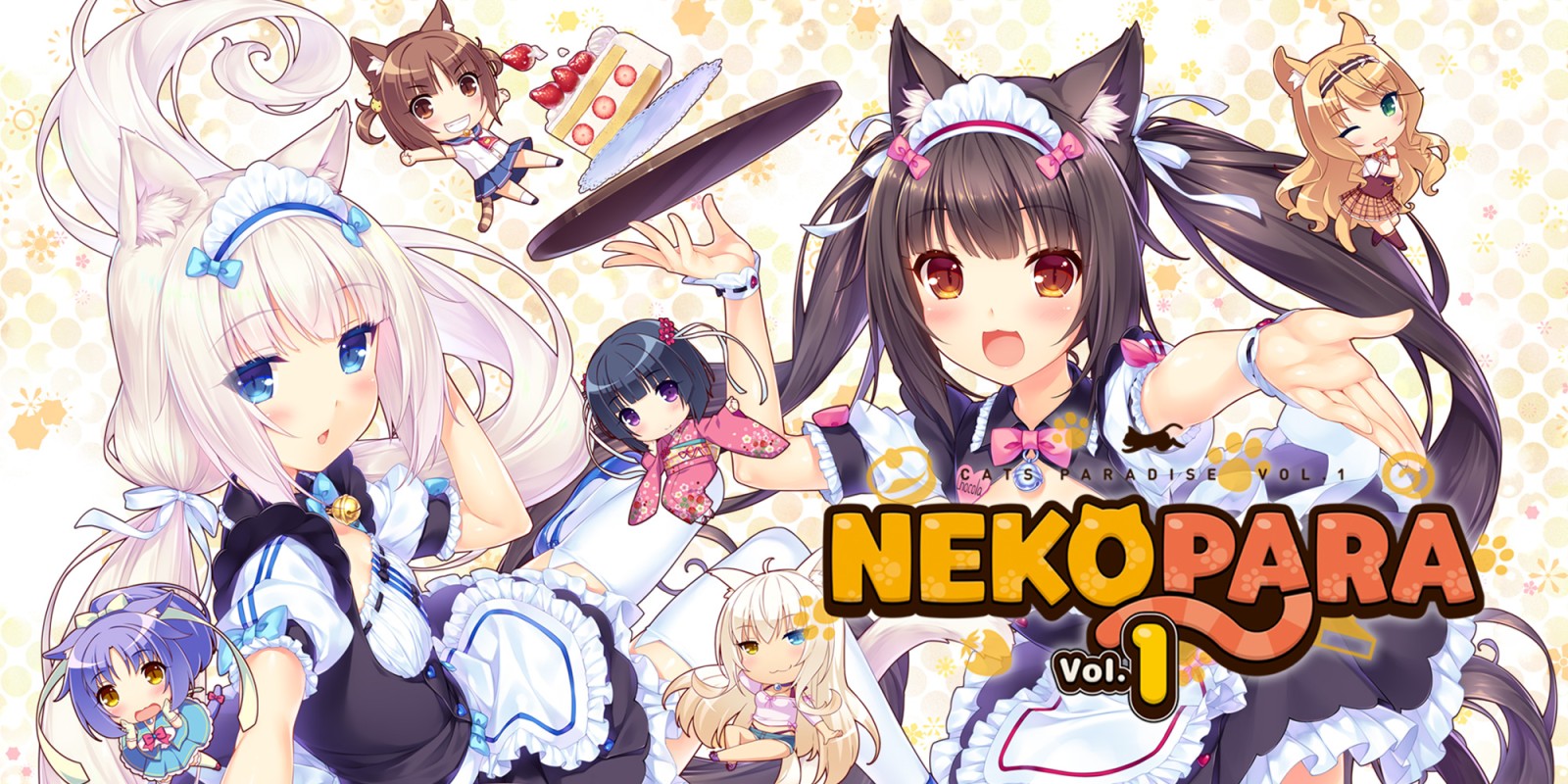 It’s not the claws you’ve got to watch out for with these catgirls!

As a journalist, I was taught to be reserved, but as an author, I was told to embrace what popped into my head and write it down. While these two things can get in the way of each other, today it is by balancing them that will actually enable me to write today’s review.

Depending on which version of the games you get (the 18+ ones,) players of the NEKOPARA (meaning Cats Paradise) games, will actually get to engage in sexual relations with the catgirls that live and work alongside the games’ protagonist Kashou Minaduki.

I know for a lot of us, sex is viewed as something that shouldn’t be in video game, and although I agree with that, there isn’t anything you can find in a video game that you can’t find on TV, in a film, in a song, on the internet or even a book.

Sex is everywhere, sex sells and while that doesn’t justify it, you can say the same for anything. But if there is a video game that has people being beheaded in it and I don’t want to see that kind of thing, I’m just not going to play that game, as I have no need to just hate on something that I don’t agree with, but that’s just my philosophy in life.

Having said that, although I am not offended by NEKOPARA featuring multiple scenes of a sexual nature, what I do take some offence to is with regards to how the sexual encounters come to be and the nature of the relationships presented on screen.

Hooking up with a friend and falling in love is one thing, but when in NEKOPARA Vol. 1, the main protagonist compares two catgirls to being like younger sisters near the beginning of the game, and then proceeds to sleep with them halfway through and again at the end, well, that’s just wrong. Not as wrong as his actual blood sister lusting after him a little too much, but still distasteful nonetheless.

But when you actually play through NEKOPARA Vol. 1, the lines aren’t as clear as I presented them. Albeit a creepy one, NEKOPARA Vol. 1 is something of a bittersweet love story. Kashou actually cares for his catgirls (female humanoids with the personality of a cat, along with ears and a tail) and those girls (Chocola and Vanilla) really care about him. (He did give them a home after all, when he found them in a street.)

Also, when raising them in his household home, along with his younger sister, parents, and 4 other catgirls, when Kashou noticed Chocola and Vanilla coming into their own as mature catgirls, he refuses to bathe them and share a bed with them. He doesn’t even want them around at first, but they actually refuse to leave him, with one of them going as far as convincing him to sleep with the other, all because she’s in heat.

Disturbing stuff I know, especially when you consider the fact that Kashou proceeds to love the other catgirls he helped raise, in the other NEKOPARA games, but there are two things to consider and the first is cultural differences.

As someone who moved around a lot growing up, I have seen a lot, literally going from one place where you could almost say anything you wanted, to another place where it was best to say nothing as you will offend everyone within earshot. By no means would I say I’ve seen and done everything, but growing up, as weird as other cultures may be, I have learned to be respectful of other ways of life.

While words like “waifu” and “hentai” make me blush, I am well aware of what they are and represent. I am also well aware of how open the Japanese people seem to be when it comes to sex and sexuality. Yes, they are kinky as hell and quite a lot of their ideas for TV shows and video games are better off staying in Japan, but that is their way of life. It might not be okay in our eyes, but to them, it’s almost as natural as breathing. Right or wrong has nothing to do with it, especially when one man’s deviant, is another man’s prude.

As for the second thing to consider, given the raunchy nature of the NEKOPARA series, do you really think the family friendly Nintendo would allow it? Of course, they wouldn’t and that is why the version of NEKOPARA Vol. 1 does not feature the sex scenes at all. There are a few innuendoes, panty shots and moments where catgirls are naked, due to being washed, with lights obscuring their private parts, but the Switch version is tame in comparison.

With NEKOPARA Vol. 1 being a visual novel, there is actually very minimal gameplay to it. Upon starting the game, you can literally toggle auto on and then never have to press another button again, as all the text that will appear, will give you enough time to read it, before moving on to the next piece of dialogue.

I’ll be honest, I probably “played” an hour of this game, this way, only to get bored as the text progressed a little slow for me, so I resumed control and pressed A to hurry it along. But, for those of you who want to auto your way through the whole thing, should you get up or immediately have to do something, and risk missing part of the game’s story, you can always press X to bring up a transcript of what was previously said and even jump to a certain point and resume watching from there.

Should you press the L button though, you will activate touch mode, which is a little mode that stops the story dead and allows you to pat your catgirls and sister Shigure, anywhere you want before returning to the story. Also, you will want to press the Y button every now and then as it will bring up the game’s pause screen and let you do things like save and return to the game’s main menu.

But yeah, gameplay is very minimal and what is present is not really enough to justify calling NEKOPARA Vol. 1 a game, as it feels more like watching an anime series, with each of the game’s 9 chapters, feeling like an episode of the saga that is Kashou’s life.  A saga, which, since I have actually yet to cover the game’s story, is the tale of a son who has left home and ready to emerge as a man running his own confection shop called “La Soleil.”

Although Kashou intends to do it all on his own, he is never given the chance as two of the catgirls from the home he left, are sent to him, as Chocola doesn’t want to be without him. During the first couple of days, he wishes nothing more than to get them out of his hair and send them home, but as he will find out, the catgirls can be quite helpful when they want to and thus they get to stay with him and secure a job working at his shop.

As unnerving as his relationship with them becomes, like I said before, NEKOPARA Vol. 1 is a game that does have a big focus on love and has plenty of bittersweet and humorous moments throughout. Also, in the state that it is on Switch, it’s not as sexualised as a number of anime series I’ve been introduced to. It’s also actually got a really stunning visual style to it that makes one sit up and take notice of it, even though all the backgrounds are still. (Not to mention the voice acting in NEKOPARA seems more genuine and natural in comparison to some anime as well.)

NEKOPARA Vol. 1 also incorporates a couple of the Switch’s features as shaking the Pro Controller and Joy-Con controllers will have the characters on screen jump, HD Rumble is present and both Video Capture and touch-screen controls are supported as well. And, just in case its main campaign is not enough, once players have gone through the whole thing, NEKOPARA Vol. 1 has an unlockable extra in the form of NEKOPARA Vol. o.

Not only is NEKOPARA Vol. 0 a prequel tale to the events of NEKOPARA Vol. 1, but it is less sexualised, more bittersweet and showcases more of the relationships between all of the characters who appear in the main campaign. There is some nakedness to it though as all 6 of the catgirls get bathed at the end, with light spots once again covering their body parts.

It also features 160 save files, so even though 5 hours is more than enough time for viewing both modes in their entirety and getting every unlockable picture, song and movie, which can be accessed via Extra, should you wish to go through it all over again, as many times as you wish, you absolutely can.

Adult tones aside, regardless of what version of NEKOPARA Vol. 1 you play, it is not the massive love fest orgy game most would have you believe it is. There is a running story throughout the entire series, each character has a fairly strong mindset and established personality. Sure they are all heavily devoted to Kashou and will do anything for him, but NEKOPARA Vol. 1 is the love story of a Master and his catgirls, but even though you don’t need to lock yourself away in a darkened basement, this is not a series of games I would recommend playing in public. Some things, after all, are best kept within the confines of your home and with those who share similar interests and not judge you. But as far as visual novels go, it is a well put together piece of art.