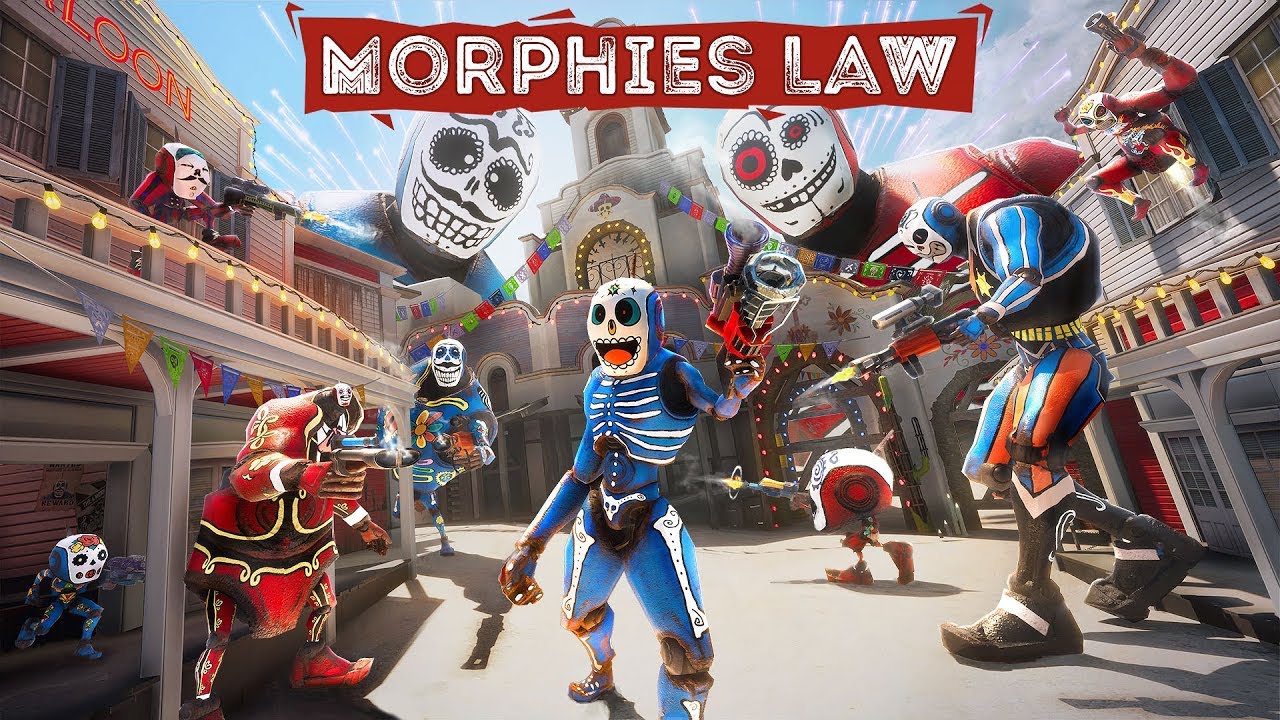 Say “Hello” to my bigger friend! Enter Morphies Law, the game where size does matter.

Since it was first announced, Morphies Law is a game I was immediately interested in and have been following ever since. The thought of finally experiencing a unique take on the shooter, especially in a time when the genre is overpopulated with similar ideas, was a breath of fresh air. But now that it’s here, is Morphies Law worth the wait? Let’s find out!

Morphies Law’s premise is quite simple at a base level. It’s a third person shooter with multiple game modes and a heavy emphasis on ‘shoot the enemy!’, however, Morphies Law has a twist that makes it stand out from the competition. As you shoot an enemy’s body part, your own part becomes larger, resulting in some crazy looking and sounding gameplay.

Running around the map with a massive right arm and tiny legs looks crazy, but what does it do to help you? Well, the growth of your body parts fluctuates your skills. Sure, the bigger you are, the slower you are, but the bigger specific body parts become, the more they affect your character and unique skills. For example, having huge hands and legs will massively boost your fire rate and jump height, while having a small torso will significantly decrease your overall health.

Keeping a healthy and well-thought out body structure can be the key to success, as you will need to find the perfect balance between gigantic bullet sponge that everyone can shoot at with ease and tiny, and a fast ant that can zoom across the map at high speeds. Killing players using these unique Morphing abilities, can be super satisfying, however, bullets sometimes feel like they aren’t hitting when they are – I felt like more feedback was needed when hitting an enemy (a sound is played but no visible aids to help you, such as a hit marker).

With regards to content, there a three main game modes to experience in Morphies Law. Morph Match drops you in a generic team-deathmatch styled game, where when the timer ends, the team that has stolen the most mass wins. Headhunt is a capture-the-flag inspired game-mode, where each team’s goal is to pick up a massive head in the middle of the map and deliver it to their gigantic avatars on each end of the map. This becomes hectic, since when you’re in control of the head, you cannot shoot, just, move and jump. This mode requires the most teamwork, as you’ll need the full support of your team, as you escort the head.

Mass Heist is the final game mode and definitely one of the most unique. Around the outskirts of the map, many buttons will spawn. When stood on these buttons, a shield around your giant avatar disappears, allowing it to be shot. You can shoot wherever you want on the avatar, then, once you’ve stolen what you want, you need to run to an altar that constantly changes positions, to deposit the stolen mass. The team that has stolen the most at the end wins. These three diverse, yet simple game-modes offered some fun experiences that definitely felt like it kept the game going at a smooth pace.

All three of these game modes can be played online, as well as offline with bots, or with up to eight players in local play. I found myself going to Versus AI when I wasn’t connected to my internet in the car or on the bus (not whilst driving though!) and it was an overall great time, as I could tinker with most of the settings such as difficulty and map and find out what weapons were my favourite or what map was the best. Local Play works fine and playing with a friend online was also easy, it’s just a shame it won’t allow you to play on the same team.

In case you’re not aware, Morphies Law offers a deep customisation feature that results in some crazy cosmetic and game changing combinations. You can create your own Morphie face using eyes, moustaches, chins, eyebrows, noses, etc., which is an in-depth feature allowing rotation, resizing and other ways to manipulate them. Using this, I managed to make some crazy faces, and throughout my matches, I found some really cool Morphies that used this customisation to a crazy extent. I even managed to make my own bootleg Venom.

Morphies Law also allows deep weapon customisations, mixing and matching parts that unlock from levelling up, you can create a wide variety of guns that each have their own features. For example, I could make a submachine gun that can also shoot a splat of ink that heals allies and slips enemies, or, I could make a shotgun that can also shoot a barrage of five rockets at my enemies. It’s a really cool feature and it gets even cooler as you level up, giving you more of an incentive to do so.

Throughout levelling up and playing the game, you’ll gain access to plugins and Ultimorphs. Plugins are this game’s version of special abilities. Depending on whichever one you choose, you can use different and unique abilities upon activating them. These change up the matches quite a bit and can be used very strategically, whether it be a support item such as a giant shield blocking bullets or a grappling hook to help you move across the match, these definitely add some variety to the matches.

The Ultimorph is like an air-strike and once you’ve built up the meter enough, press it and you’ll take control of your team’s avatar, able to launch either a devastating airstrike capable of “one-shotting” enemies or a shield to give your team. These Ultimorphs are underused in matches, and in all fairness, they’re not that powerful, but definitely something extra that is a bit of fun throughout matches.

Levelling up though, needs tweaking. For every game you play, get just a small bit of XP, and in the long run, the game is too much of a grind. It genuinely feels like it follows the F2P formula, as I found myself looking for some kind of ‘purchase’ button, as it felt similar to the structure of Paladins or Fortnite, where levelling is slow without shelling out cash. This is not the case however, since Morphies Law asks for $20 US dollars up front and has no in-game microtransactions, with many of the cosmetics you gain by opening Piñatas.

Piñatas are essentially this game’s form of loot box. You’ll receive them by playing normally and with each one, you’ll receive three items of cosmetics of different rarities. These can also be bought in the shop using currency you gain from playing, but piñatas are the main way of earning them. Once again, this gave off a very F2P vibe, as I felt it would have been much more rewarding to earn cosmetics from challenges or randomly after matches in the vein of Rocket League.

While playing Morphies Law, I came across a wide variety of bugs, glitches and general gameplay issues. When you spawn, you don’t instantly have your weapon. What does happen is after a second or two, things freezes for a little bit and then your weapon spawns in. This basically means that if an enemy is in your spawn, it is very easy to get spawn trapped, as you can’t shoot back until a couple seconds later.

Using the Sticky-Hand plugin, I found myself being flung every which direction and the actual hand itself was glitching out uncontrollably. These are two examples of many bugs and issues with the game. The developers, however, have already mentioned that most of these bugs and issues will be fixed in the next patch, however.

The biggest, defining issue with Morphies Law is the lag. Constant lag. There is obviously something wrong with the net code or the servers, as the lag is unbearable with to play online. The game does run at a pretty fluent 60 fps, dipping in and out depending on what’s on the screen, but during games, you’ll find yourself constantly zipping around, teleporting and rubberbanding all over the place; and this problem applies to almost everyone.

In the state they’re in now, the online is just not worth playing as enemies are very hard to hit and you’ll die before you can react to anything, really. It’s unfortunate and something the developers have already talked about fixing in the next update.

The visuals in Morphies Law are really great. The whole theme fits a ‘Día de Muertos’ or Day of the Dead vibe and it really fits with that style of game! All the characters and maps fit a somewhat Mexican theme and it just feels so unique compared to other shooters on the market. It’s definitely an eye-pleaser.

The soundtrack is really well done too, as I had a good time listening to it on the main menu. Unfortunately (I’m not sure if it’s a glitch or not) but I never heard music play at all during any of my matches, this was kind of a let-down, as there was no dramatic ending or build up at all. Overall though, Morphies Law does hit it out of the park visually and audible.

*During the time of writing this review, a “version 1.0.2” update has already been revealed to be awaiting approval and set to fix numerous issues, including better spawn protection. The full patch notes can be seen here.

In the end, to answer the question ‘is Morphies Law worth the wait?’ honestly, not yet. There are too many bugs, gameplay issues and lag to fully justify a purchase of the game yet. The premise of the game is great, reminding me of the unique take on shooters that Splatoon and Gotham City Imposters left, but it’s execution just feels a bit unpolished as of yet. It’s a game I will see myself coming back to though, it just needs more updates and patches to justify that. Morphies Law is a wonderful twist on the generic third-person shooter that with the help of a couple more fixes and patches, could well be one of the Switch’s best hidden indie gems.