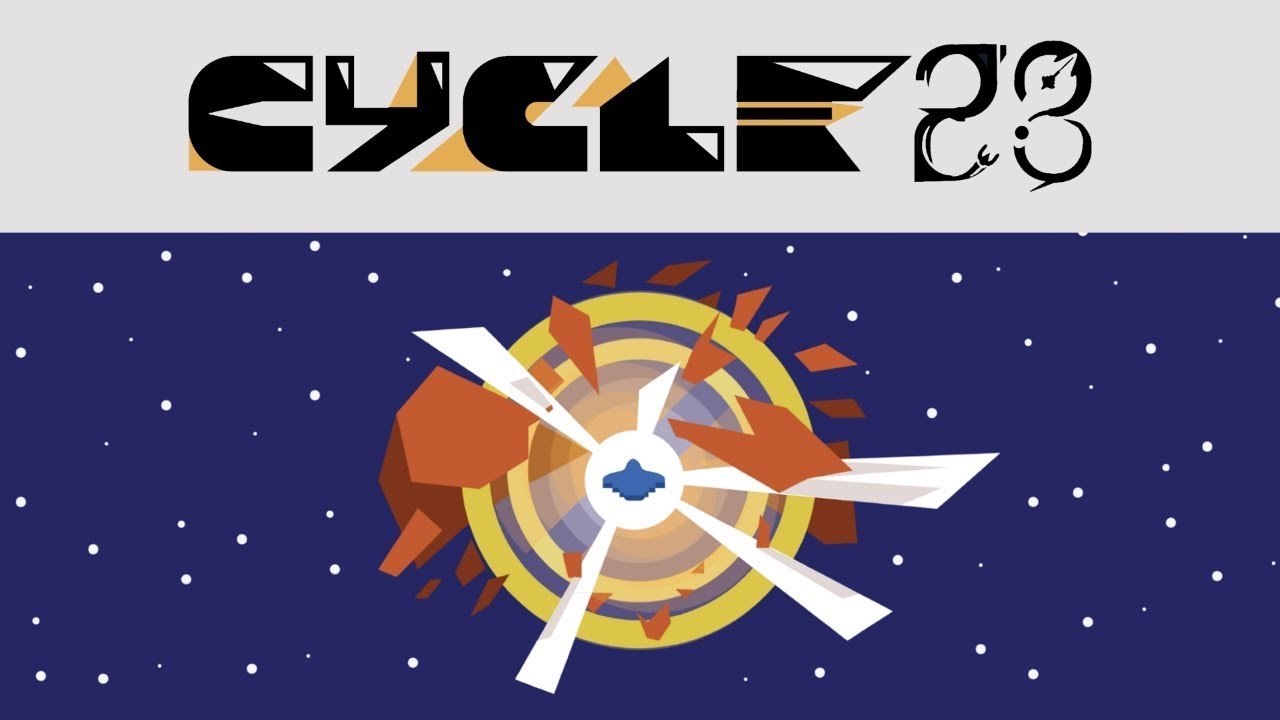 At first, Cycle 28 looks like a basic momentum-based shooter and that’s part of the equation. There is a story and it’s about repeating the same cycle over and over again. It’s somewhat hiding the fact that they want you to play the game on repeat, but this never really bothered me.

The main mode loop has you playing cycle 27 to try and get to cycle 28, with many different kinds of ships trying to stop you. There are some small/single ships, ships with other smaller ships inside of them, and some weird rolling pin ships that are very difficult to bring down. Although, many of these ships can wreck you quickly if you’re not careful.

You start off being pointed in the direction of some enemy ships and it starts off with some weaker ships attacking you, but quickly ramps up until the whole screen is filled with enemies. The main goal is to not get hit, because that will reset your score multiplier. That’s the largest favor in getting the highest score possible because each round is timed. This makes me think that a cycle is equal to one day, since its 24 hours that moves at a quickened pace.

What happens is that this limits all players to the same amount of time to work with. There’s no way to power your way through by killing as many enemies as possible, because all the enemies take quite a few shots to bring down. You really need to make an effort to destroy a ship and no quick shoot em’ ups are going to do the job. Always keeping your score multiplier up is your best bet for finishing with a higher score.

There are upgrades you can gain for your ship, but they’re only given if you beat your own personal best score from previous rounds. This seemed like an odd choice, but made sense once you realize trying to best your previous score is Cycle 28’s clever way of ramping up the difficulty. Unfortunately, many of the powerups are generic, such as shooting more bullets out the front of your ship, or more out of the sides, back, etc. The other options can give you light or heavy drones with add-ons being implemented to add more or make the ones you have more powerful.

Cycle 28 gives you the option to equip two upgrades at a time. I found that the multi-shot was a requirement, as it generally gave more firepower during combat. I’m not really sure how much more the other upgrades really helped though. It’s not a bad system and you’ll be playing through multiple times with plenty of chances to try every combination, but it’s just not too exciting.

Since Cycle 28 is inspired by another of my favorite retro-like shooters, Luftrausers, the developers took the same health mechanic with the ship’s health being displayed by how much smoke is coming out of it and an emergency sound effect going off. To replenish your health you just need to wait without shooting, which you can still fly around and regenerate health thankfully. I found the health mechanic in Luftrausers to be better, because it was much more obvious how much health was left and when it would start coming back.

What I can say is that I really enjoyed the feel of flying in space. It has the correct momentum and you don’t seem to lose any if you’re already moving in one direction, similar to the classic Asteroids. Your gun can push up back depending on how powerful it is, so you can’t just keep moving in one direction if you actually want to hit something. I found it hard to aim though, because turning the ship wasn’t as smooth as I would have liked it. Still, it keeps you moving which is probably a good thing once the bullets start flying.

Cycle 28 nails that one more time feeling and compelled me to keep playing way more than I thought I would. With how the score is tallied and getting upgrades, I really wanted to see what would come next, and still, the story was a complete mystery to me. Every time you start a new run, there is some small amount of text shown that seems to be a journal from the pilot. It strings the story along just enough to keep you wondering what’s actually going to happen.

The one aspect of Cycle 28 that I believe is holding it back, are the details in the ships. Some of them have interesting designs, but there is a lack of detail that makes it all not that interesting. I have nothing against minimalistic art-style types of games, but I found the visuals to not be compelling or a reason to come back. Fortunately, this doesn’t take away from how good the mechanics are, and that is why I kept playing.

Overall, Cycle 28 has some interesting ideas and mechanics. It’s definitely a budget title, but the gameplay is fun and rewarding. The graphics weren’t anything spectacular, even for a retro title, but I did enjoy some of the mystery with the narrative structure. If you’re just trying to get the highest score on the leaderboards, or just want to play a unique budget shooter, Cycle 28 should more than scratch that itch.