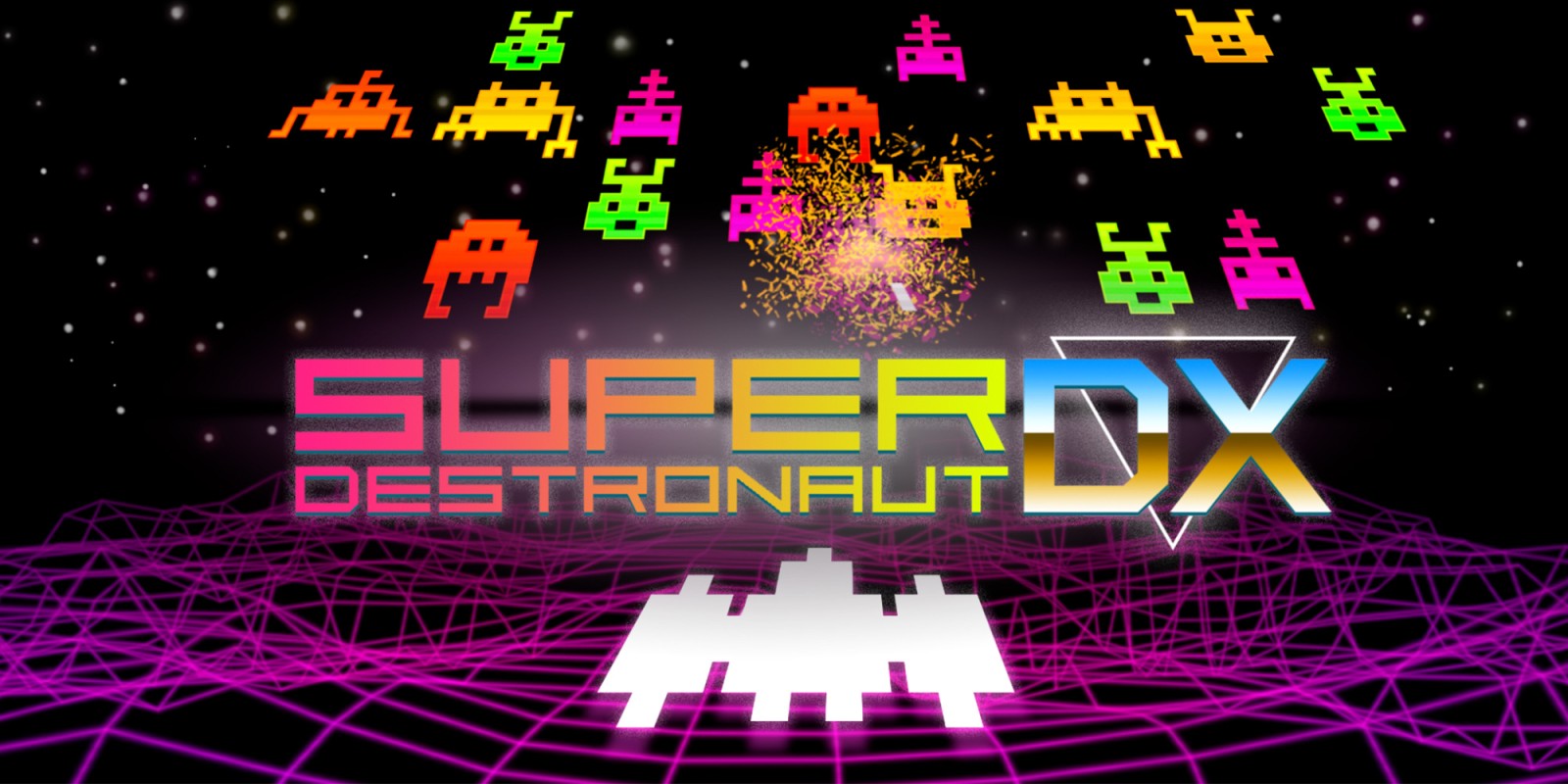 The fine people over at developer/publisher Ratalaika Games have been on top of providing the Nintendo Switch with some great gaming content. While I enjoyed Inksplosion, I felt it didn’t innovate enough in the shooter genre to really stand out. With Super Destronaut DX, they have taken on the granddaddy of all shooters, Space Invaders, and have succeeded in providing another fun, albeit shallow, shooter experience.

Super Destronaut DX is basically an updated version of the classic Space Invaders, with some added cool looking graphical effects, new ways to die, and some additional modes. I’m a big fan of shooters in general and it’s sometimes nice just to have an arcade pick-up-and-play experience. The fun factor is present for sure, but I wonder if this is the type of title that I will keep coming back to on my Switch.

There are four main modes to choose from in Super Destronaut DX. Challenge mode has you perform a variety of different goals, including gaining a high score or kill a certain number of enemies. These challenges get progressively harder as you make your way through the 30 different scenarios. The standard mode is Classic and this is where you have three lives to kill as many enemies as possible to gain the highest score.

Time Attack mode gives you unlimited lives and tasks you with getting the highest score possible in one and a half minutes. Finally, there’s Hardcore mode in which you only get one life and enemies shoot much more frequently. Rounding out the content of Super Destronaut DX is a Leaderboard where you can compare your score from each mode to other’s from around the world or just friends. You can also view your statistics, including deaths, high scores, shots fired, etc. as well as play a tutorial which goes over the basics of gameplay.

I had fun playing Super Destronaut DX, mainly due to the similarities with Space Invaders. There are enemies at the top of the screen that are coming down towards you and they’re occasionally trying to shoot you while you are doing the same. Where it changes things up from the 80’s arcade shooter is how you can pick up weapon upgrades from downing a specific foe. By killing the powerup ship, you get a new weapon temporarily, which may be homing rockets or a spread shot. All of the weapons are very useful and will usually wipe out all the enemies onscreen in a few shots.

Another difference Super Destronaut DX features are these ghost ships which spawn from defeated enemies. The ghost ships fall out of the sky and you can keep shooting the ship to gain more points, but it will never be destroyed and if you don’t avoid the ship while it falls you will lose a life. There are also ghost ships traveling out of the background to the front of the screen and, like previously mentioned, if these ships hit you you’ll lose a life.

The enemies shooting at you all have different projectiles depending on the type of ship it is. Some shoot spread bullets, others shoot rockets, and even wavy bullets to try and trick your evasion. It adds to the challenge to have all these different types of bullets flying at you, as well as the ghost ships to worry about.

A standard play session will usually only lasts a few minutes, and fortunately when you die getting back into the action is fast. I liked that the Challenge mode was added to give Super Destronaut DX some longevity, as it adds more content and variety rather than just chasing high scores. It was always nice to look at the online leaderboards to see where I ranked, which was always fairly low compared to the master players. Local multiplayer was also fun to dabble in, and a good way to see who can gain the highest score.

Overall, Super Destronaut DX is a fun and addictive title that I’m not sure will keep your attention for very long, but is enjoyable regardless. I was hoping this would have taken more refinements and originality from games like Geometry Wars and Luftrausers: Aerial Combat, but you’d be hard-pressed not to like some of what Super Destronaut DX has to offer.