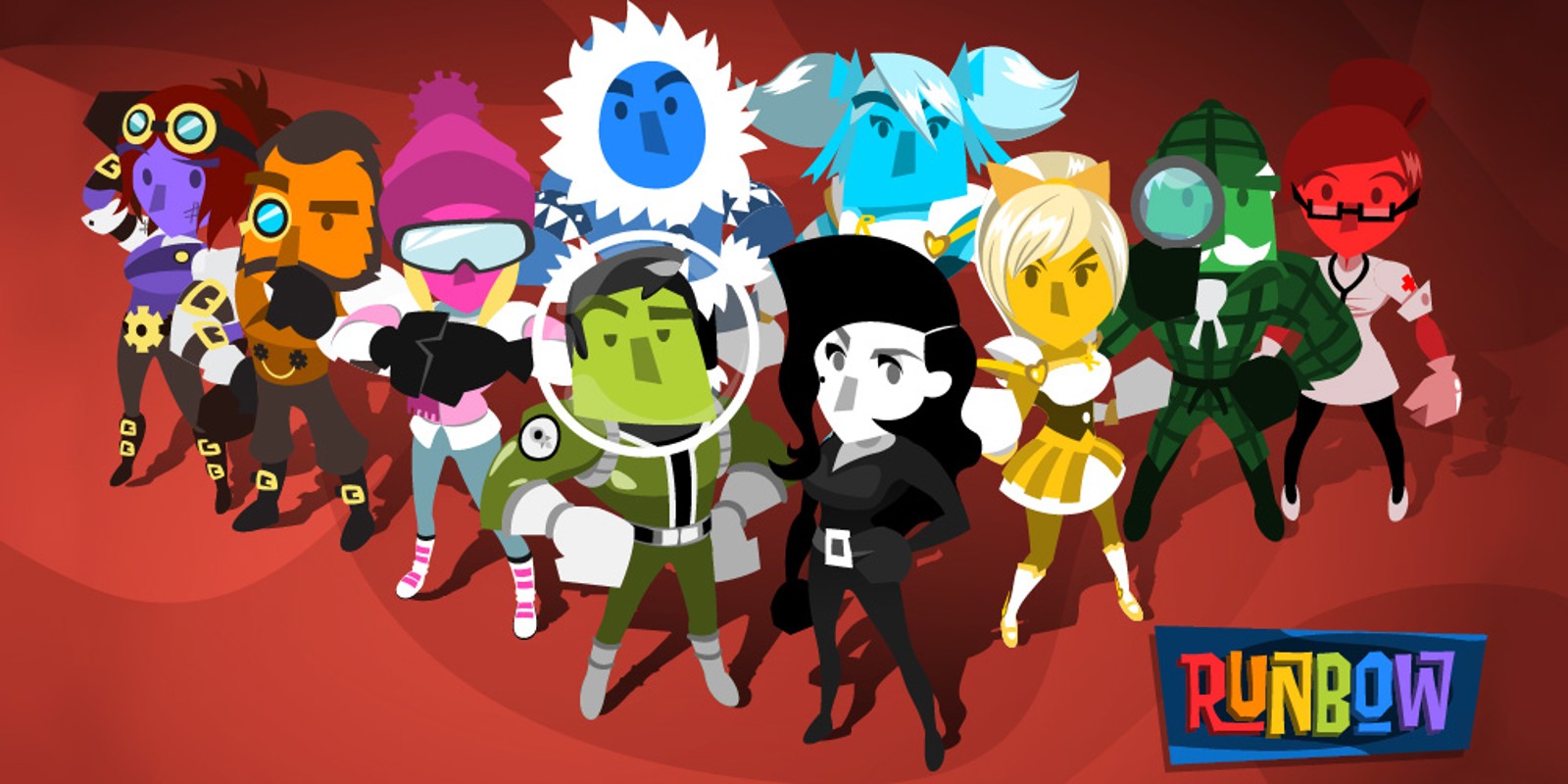 Platformers are a dime-a-dozen on the Nintendo Switch eShop and that’s not necessarily a bad thing though, as some of the best eShop titles really stand out on the console. They come in a variety of different gameplay mechanics and control methods, differentiating themselves from one another, so they’re not all the same type of game. Now, developer 13AM Games is bringing their own twist to the platforming genre with their bright and colorful title Runbow.

With Runbow, color is the theme of the game and this is what makes it different from many other platformers. The main objective is to run and jump your way through obstacles to reach the trophy at the end of a stage. The uniqueness and challenge of Runbow comes when you factor in the color changing background. This is a big deal because platforms will come in a variety of colors and if the background shifts to the same color as one of those platforms it disappears. Runbow will constantly keep you on the tips of your toes with making split-second jumps as you try to memorize color patterns and watch out of the quick cues giving you a heads up on the color shifts.

While Runbow can be enjoyed as a single-player offering in its adventure style mode, it’s mostly being promoted as a multiplayer party title and that’s an accurate description. It’s one of only a few games on the Switch that can support upwards of nine other players in local multiplayer. I could not find enough friends for that experience, but when I played with five other friends it was an absolute blast. 13AM Games did include an online multiplayer mode, however, at this time I was unable to connect with anyone due to this being an early copy. I’m sure if it works as well on the Switch as my other friends have acknowledged on the Wii U, it will add many more hours of fun gameplay.

Multiplayer is separated into four different modes: Run, Arena, and King of the Hill. Run has you simply racing to be the first one to reach the trophy at the end of each level. Arena tasks you with being the last player standing by pushing one another off stages or into hazards. Lastly, King of the Hill is just what you would expect out of a mode with such a name. Stand in a specific zone long enough until time runs out to come out at the victor.

The multiplayer was a joyous experience in my time playing and I hadn’t laughed continuously while playing a game in a long time like I did with Runbow. This laughter and joy was heightened when playing with my kids or friends, but it does give a testament to how much enjoyment you will have playing Runbow. Each round ends in a matter of seconds, but so much happens within that time span of punching other players, jumping from disappearing platforms, and picking up powerups that change the tide of racing or battle.

There are two single-player modes: Adventure and Bowhemoth. Both Adventure and Bowhemoth are still fun to play solo and this is where the bulk of my playtime occurred. There’s quite a bit of content to be found here with Adventure mode coming with its own storyline and offers over 100 challenging stages to complete. The objectives consist of reaching the trophy at the end of a stage, defeating a certain number of enemies, or collecting coins as fast as possible.

Sometimes Runbow throws in a few interesting ideas to mix the gameplay up, including playing upside down, having to run super fast, or playing underwater which makes jumping more floaty. These are great ideas and they are executed well to break up the gameplay, but unfortunately, these scenarios are few and far between. With a huge assortment of levels offered, I would have loved to see more stages with unique objectives to keep the player invested. Also, the variety of enemies is lacking with there being only a handful of different creatures impeding your progress.

Adventure mode comes with a few boss fights, but this is probably the weakest aspect of Runbow. The bosses don’t feel like real threats, as they are essentially just a normal stage with a person standing at the end that you need to punch once. They could have done more to flesh out these boss levels to make them feel more intense and not just like running through a slightly harder stage.

Bowhemoth mode is for those who are really seeking to test their skills. This mode pushes you to race through over thirty minutes of platforming challenges without taking a single break; meaning you can’t save and return at a later time to continue. The color changing mechanic is in full force here as it throws some ridiculously challenging obstacles at you. It will test your patience, but Bowhemoth is still delightfully painful to play through.

One thing you’ll notice if you’re seeing Runbow for the first time is that it’s not shy in its use of colors. With the background constantly changing, it keeps the visual appeal very much alive while playing. 13AM Games also went with more of a simplistic approach to the art style that still makes it look beautiful and unique compared to other offerings on the Switch. The soundtrack is sublime, mixing together a variety of different musical genres from jazz, Bossa nova, and even surf rock. The upbeat nature of the music meshes perfectly with the style of gameplay.

Overall, Runbow is a Switch eShop game that is totally worth your time, even without friends to play it with. It might not introduce too many ideas outside of the unique color changing mechanic, but I can say I had a blast playing it. Messing around with friends in multiplayer and accomplishing all the tasks in Adventure mode will, no doubt, bring a smile to your face. Runbow may not be a perfect game, but that will not stop you from having an enjoyable time.