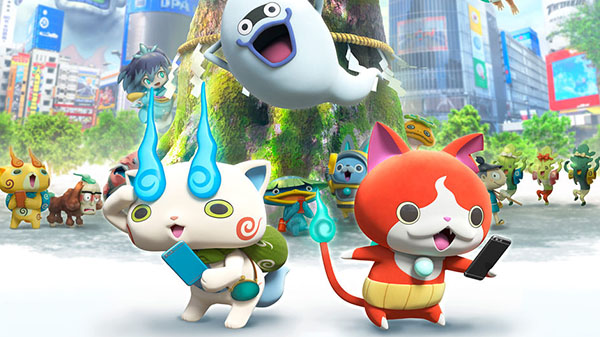 For quite some time Level-5 have been teasing a 5th anniversary announcement for the Yo-kai Watch series and at last, it has come.

Admittedly, for all intents and purposes, Yo-kai Watch World, is essentially Pokémon GO, but with but with Yo-kai instead of Pokémon and a couple of differences that will be covered momentarily. It is a mobile only title that is available right now in Japan, for iOS and android devices. It is the work of both Level-5 and GungHO Online Entertainment, an official website has been launched for the title and for your viewing pleasure, we have the following video:

A Yo-kai Watch tie-in with Google Maps has also been revealed, which has an English voiceover and in Japan, as of tomorrow, Jibanyan will appear as a Google Maps navigational marker. Having downloaded the app himself, Japanese Nintendo has shared two pictures, which you can see tweeted below, followed by a Gematsu translation of Yo-kai Watch World’s store pages:

You are the Protagonist on an Adventure Set All over Japan

The many unique yo-kai of the Yo-kai Watch series like Jibanyan and Komasan appear in the real world. Search for and battle against the yo-kai that appear all over Japan. Complete your Yo-kai Encyclopedia by moving yourself or by getting other players to move.

First, “Search” for Yo-kai on the Map

In order to find nearby yo-kai, “Search” the location you’re at on the map. There are various yo-kai to be discovered depending on the location. Don’t forget to Search whenever you visit a new place.

Find Yo-kai with Your Smartphone Screen

Tap the icon of the yo-kai you discover through Search. By doing this, you will be able to see that yo-kai through your smartphone screen. Find yo-kai and pursue them so they don’t escape.

When you Search for yo-kai, a battle will begin. Since battles are semi-automatic, they’re very simple. Use special moves when you have an opening or are in a pinch. By winning battles against a yo-kai, you may be able to befriend them. By training the yo-kai you befriend, you can battle even stronger yo-kai.

Your yo-kai can “Possess” nearby players. A possessor yo-kai can travel with the player it possesses to new areas. They might bring back a yo-kai from somewhere you couldn’t go on your own, or sometimes they even bring souvenirs. (Rest assured that your exact position will not be shown to nearby players.)

You can plant trees at your current location, as well as at places a possessor yo-kai visits. Yo-kai gather around trees, creating the opportunity for new encounters. Make proper use of Yo-kai Trees to increase the number of places you can befriend new yo-kai.

Plenty of Ways to Play

Yo-kai Watch World is full of other ways to play. From “Advent Bosses” you can enjoy anywhere, to “Departed Maps” where you can look back on your previous travels and more. How you play is up to you.