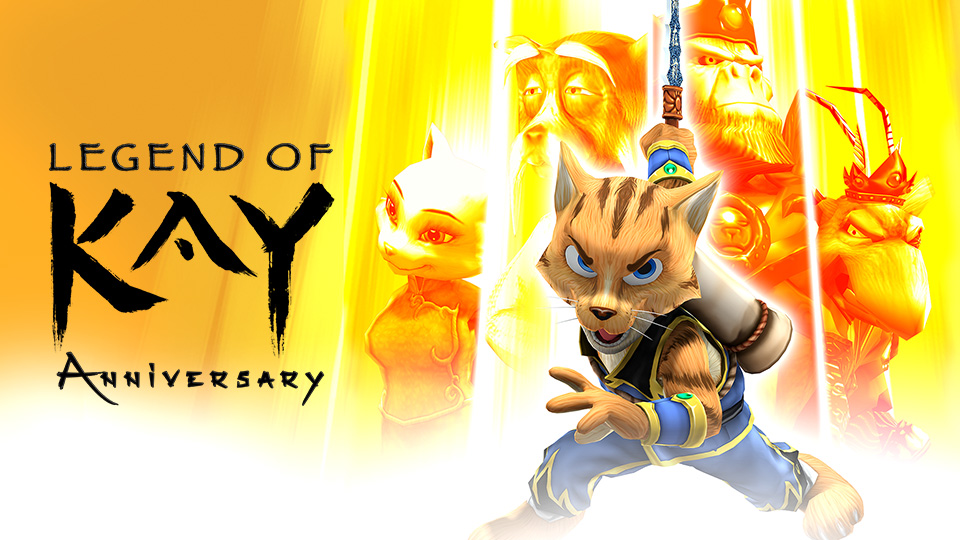 Sometimes a classic is better kept closeted in our memory.

The Legend of Kay originated on the PlayStation 2 in 2005, amongst mixed reviews and was later developed for the Nintendo DS in 2010. The DS version was received unfavorable by critics and then in 2015 the game was given a 10-year anniversary release across various platforms. Fast forward to now, Legend of Kay is out on the Nintendo Switch, but its story is still the same. It tells the story of an island’s? conquest from rats and gorillas that have overrun the village and begun to terrorize the citizens. Enter Kay.

Kay is a young, strong-willed feline that seems to be hard-headed and frustrated that the conquerors have threatened The Way, the world’s peaceful religious teachings with their own beliefs, The Din. The gorillas and rats enslave the villages of cats, hares, frogs, and pandas, which is where Kay takes up his sword, and other weapons along the way to fight back and lead the resistance.

Along the way, you will uncover the story of the invasion and learn about The Way and The Din through animated storyboard-like cutscenes, interactions with NPCs and reading posters found throughout the villages. Your master, while sometimes lazy and intoxicated, will teach you valuable lessons and techniques to help you along your path to the end. A lot of the lesson progression feels like a similar way, in how you learn different fighting styles in The Legend of Zelda: The Wind Waker.

Through your journey, you will cover the other various villages and complete story tasks and fetch quests to further the story and open up different parts of the world. The story is very linear with a lot of do A) so you can do B) only to do other tasks to unlock gate C). This bland storytelling troupe was not enough to keep my interest through the game, but seeing the story to the end in the hope that it would get better was the only thing keeping me going.

A lot of what can be appealing about the Legend of Kay, is how closely it resembles some of the 3D Legend of Zelda games; but at the same time, this similarity comes off as being short-sighted. The controls tend to somewhat unresponsive at times and jumping especially can become easily disrupted by terrible camera controls and a lock-on system that can ruin your movement and fights requiring you to redo battles and sections of traversing the world. While traveling through the island, you will find heart containers, magic abilities, and fight bosses.

Throughout the journey, you will unlock different weapons of varying speeds and strength, equip bombs, potions and more. All of this is very similar to adventure games like ones in the Zelda series. Aside from the boss fights, encounters with enemies during combat come as single to multiple enemies ranging from the simple grunts to stronger encounters. What makes them unique is the way you can combo together attacks in a way that reminds me of the Batman Arkham games. While this sounds good on paper, the actual combat is not always reliable. It’s a shame that the camera, hit detection, and lock-on system breaks the flow more times than it works.

Musically, a pseudo-Japanese inspired twang is the main beat throughout the game…although it is not really that great to listen to. There also isn’t a memorable song or style to the game that stuck with me like other games I have played on the Switch this year. I know the studio is trying to fit somewhere in the Zelda/Okami style of game, but it more or less just comes off sounding cheapened by the lower production quality.

As for what’s in store from you audio-wise, if you know the sound a cat makes when it’s in pain…that is what some of the voice acting sounds like. The Legend of Kay has a surprising amount of voice acting for a B-level game. But along with its smaller budget comes inevitable shortcuts, most of which is noticeable in the voice-acted segments of the game. You will run into a lot of NPCs that speak throughout your time in the game. None of the actors were really good and more times than not I found that the audio recorded for the game came off as grating to my ears which is never a good sign.

I actually spent most of the game, playing with the character audio turned down or off and just read the subtitles. It doesn’t help that as the characters talk they often seem dead-eyed or looking just past the character you are interacting with. That and miscues from the lip-syncing make for some hilarious looking interactions. Along with audio from characters, there is also your standard fare of canned fighting, jumping, and movement-related sounds, but nothing was really memorable.

The Legend of Kay Anniversary is a unique game in that is seems to fall into that area of gaming when you ask the question “Why was this released and who is this game for?” I never played the original Legend of Kay game back in 2005. All the time while playing the Switch Anniversary game I couldn’t help but wonder if this updated game couldn’t use a bit more time in the polishing stages cleaning up the combat system, the character voices and model textures.

The Legend of Kay isn’t a terrible game it just hasn’t aged well into 2018 from its 2005 brethren. This is may not be a disappointment if you’re a fan and hoping to relive some memories from your childhood. If this is your first time playing the game you may be able to look past the things I mentioned above as issues, but I can’t help but feel like this game should have just been left to memories instead of given the HD treatment and ported to the Switch.