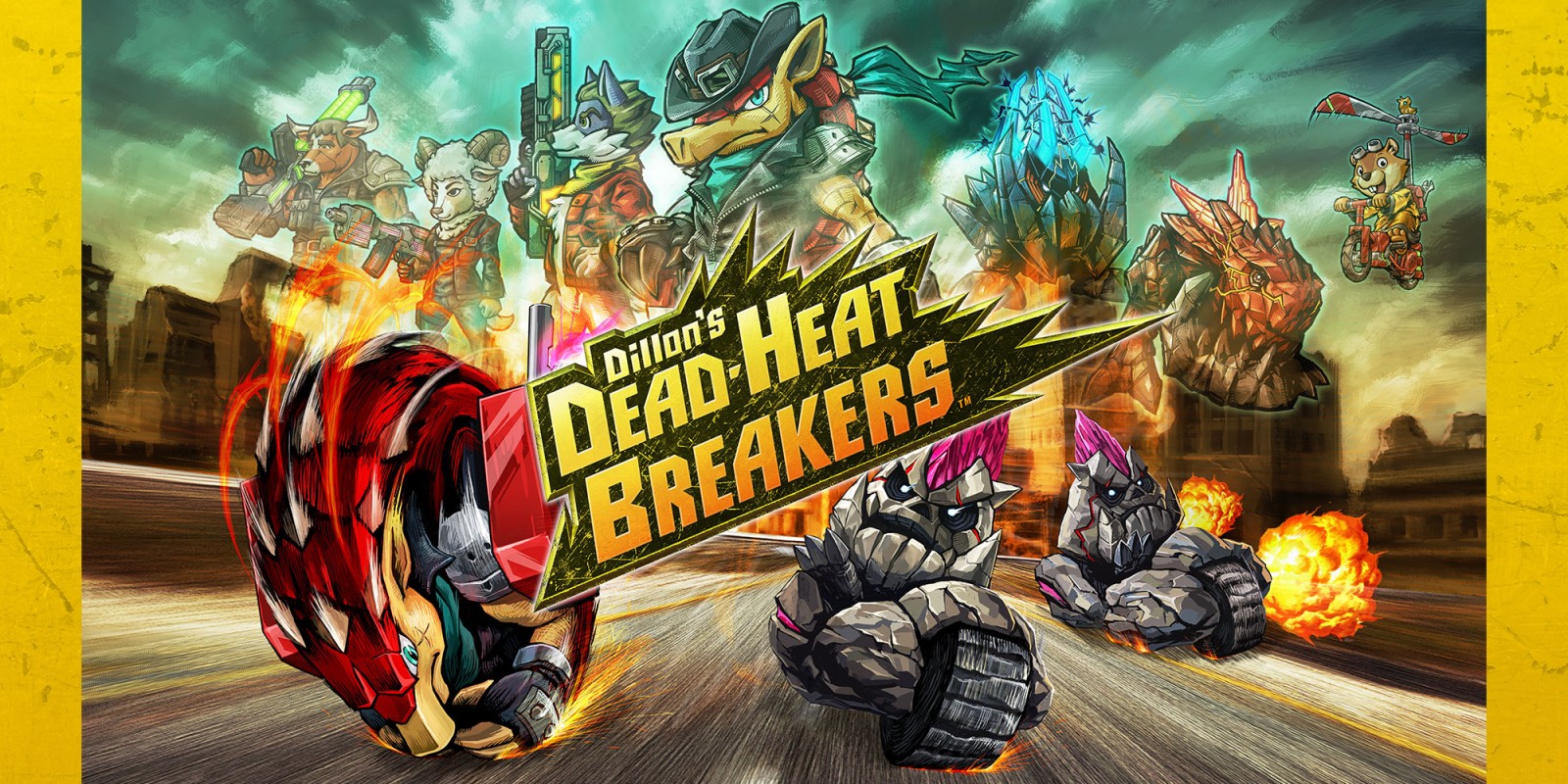 The good times will roll in a post-apocalyptic wasteland!

Once upon a time, in 2012 on February 22, a certain red and yellow coloured armadillo come on the scene, as the hero to a little game called Dillon’s Rolling Western. At first glance, you’ll have been right to have assumed the digital-only title was an indie alternative to Sonic the Hedgehog, but an indie game it was not. Prior to Dillon’s Rolling Western, developer Vanpool was previously involved with Mario & Luigi: Superstar Saga for the Game Boy Advance and the Tingle games, so when it comes to Nintendo and Nintendo platforms, they are well-versed in the ways of the Big N and speaking of the Big N, they even acted as the publisher for the new debut IP.

Despite some very mixed reviews, Dillon’s Rolling Western went on to get a sequel by the name of Dillon’s Rolling Western: The Last Ranger, in 2013 before all of a sudden, the series stopped dead in its tracks. Years passed and there was no sign of Dillon returning, especially not when Vanpool acted as co-developers on Paper Mario: Sticker Star and Chibi-Robo! Zip Lash. But, with all things coming to an end eventually, the lack of Dillon would end when Dillon’s Dead-Heat Breakers was revealed for the Nintendo 3DS.

Having only been confirmed for Japan, it wasn’t until the March 8, 2018 Nintendo Direct that confirmed a Western release and some gameplay footage. There was disappointment a Switch release wasn’t confirmed, but at the very least, Dillon’s Dead-Heat Breakers would see a release on the platform that birthed the series. Only, things would be a little different this time around, as although Dillon’s Dead-Heat Breakers is a digital-only title in North America, in Europe, it is both available digitally and physically.

Now, due to the physical release, there is a huge difference between Dillon’s Dead-Heat Breakers and the previous titles, what with the latest instalment having a $39.99 price tag, instead of $9.99 and $10.99. But is the higher price justified? Let’s find out, the long way! Once again, being a game about the silent, yet tough Dillion, in what fills like a Western meets Mad Max sitting, Dillon’s Dead-Heat Breakers comes across as being a Sonic alternative that makes Dillion share the limelight with another.

As part of the game’s 15+ hours plot, Dillon’s Dead-Heat Breakers tells the tale of “The Red Flash, Dillion,” “The Mechanical Genius, Russ” and “You, the Player, AKA the Hero.” In a world where 80 years previously, the world was devastated, Dillon’s Dead-Heat Breakers is something of a “going home by any means” story.  The hero, an Amiimal, which is an animal (cat, wold, bear) that has been fused with your Mii, wants nothing more than to go home. To return to their village, which is currently shielded off from the outside world, thanks to a big red barrier.

To make matters worse, your Amiimal is under attack from Grocks, which are aliens made of rock. From a chance encounter with Dillion and Russ, your Amiinal will live to fight another day, but living a peaceful life in The City is not on the cards as together, the three of you will need to create an Ultimate Weapon and do whatever it takes to stop the Grocks invasion. Oh, and to stop the Grocks from stealing the pig-like creatures called Scrogs, which just so happen to be the local livestock.

Saving the day and the world, however, is not without a cost. An Ultimate Weapon requires more than just parts to make it, but it also needs money to finance the manufacturing. To earn money in Dillon’s Dead-Heat Breakers, there are a number of ways you can go about doing it. You can play the main game, going from one level to the next, defeating bad guys to rack up the coins, but you can also work a day job.

In Dillon’s Dead-Heat Breakers, there is a day and night cycle and during the daytime, your Amiinal can get a part-time job at a supermarket, a plant, a combat arcade game, a racing arena for Dillon to compete in and make a lot of money. While some of the

Jobs don’t seem all that, the shop simulation is simply fantastic. It really reminded me a lot of the shop segment in Digimon World. It was not easy, but it’s not as good as the simulation you can experience in Dillon’s Dead-Heat Breakers, as you’ll actually be able to put out the stock you wish to sell, arrange the presentation and tally it all up. The best part about all of it though, is in addition to increasing the shop’s reputation, you can also earn a commission, with the more sales resulting in more pay.

However you choose to spend your day, come night time, it’s time to spend your money. Be it purchasing new hear, new items like medkits, or hiring Gunners (other Amiinmls who are represented by the Miis you have saved on your 3DS system.) Up to 4 Gunners can be hired at a time (if you have more than enough cash to hire them all,) with Gunners differing in classes, resulting in different wielded weapons and weapon damage output. Should you find yourself being spoiled for choice though, you can spend extra coin to find out who is worth having and who isn’t, but I didn’t bother with this function since a Bunny Miyamoto and Bear Aonuma, were always a must buy.

Once a team is assembled, a quick chat with Russ is more than enough to have you set off on the next mission, with each one being played in two parts. The first is a tower defence style of gameplay that will ask you to auto or manually assign your Gunners into position, charge up their weapons and then attack the Grocks. You can attack them by holding A to charge up your roll, hold A whilst rolling, for a super charge and barrel right into them. Once stuck, battles will take place in real-time situation and have Dillion come face-to-face with a group of Grocks that he’ll need to take down before returning to the open area you must defend and charge at other Grocks. (Think Pokémon Battles but without taking it in turns and just going all out.)

Once the enemy is whittled down, the battle will soon take a different pace when your enemies (of which there are more than 30 types, which includes enemies that swim, dig, fly and electrify.) When free-wheeling around the stage, using Dillon, players will have a limited amount of time to chase down each of the remaining foes and kill them all by slamming, clawing and grinding, which is super effective at taking down bosses and earning materials. (Then again, materials can be earned by killing an enemy, by any means.)

When a level is successfully completed, players will be evaluated on how they did and earn a score based on things like time taken and kills. Now, whether your hired Gunners killed or just stood still, looking pretty, they’ll still earn EXP and level up and prove themselves worthy of keeping you around. Oh, and just in case you were interested, each level does have a star ranking with 5 being the highest, so if you feel like being the biggest and baddest armadillo of them all, with the Replay Machine that is located in the garage of the hotel, when in the City, any previously beaten level can be played. You will need to rehire a team to do the mission with you, but that’s okay, since it gives you the chance to try out some other Gunners and see who is better suited to your style of gameplay.

It is vital to experiment, as Dillon’s Dead-Heat Breakers is not one to shy away from turning up the difficulty, but while the difficulty and Banjo & Kazooie-like mumbo jumbo nonsense, dialogue aren’t cons, there is a huge one present in Dillion’s Dead-Heat Breakers and it’s a game breaking bug. There are instances where the game can crash on you unexpectedly and every time you try to load up and carry on as you were, but the game will crash again, and again and again. It will even crash in the same place, when you start a new game on the second available save file and get back to where you were. It’s been posted in forums that this crash is believed to be due to a corrupted save file, which is not fixed by deleting the game from your 3DS and downloading it again. Instead, it has been advised that players should delete their entire save or saves from their systems and start anew, but even then it’s not a 100% guarantee. There’s nothing worse than putting 10 hours into a game, only to lose your entire progress due to something that is not your doing!