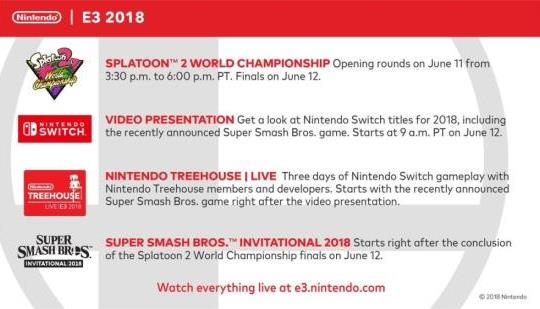 We are under two weeks away from E3, what many of us believe as the most exciting time of the year! While us Nintendo fans are spoiled by multiple big Directs throughout the year, this is the time where the big stuff gets announced.

While some of the games on list my sound extremely unrealistic (which is because they might be!), I in no way expect all of this stuff to happen. This will just be a bunch of things that I could see happening, in a list, and I will give it my personal rating out of 100 as to how likely I think it is. I will not be covering Indie/Third Party games but I assume TONS will be announced as well, given how well the Switch is selling and the mass popularity.

One final thing before we start, Nintendo has said that the Spotlight will only focus on 2018 releases and that games releasing beyond that will “be featured at a later date.” While i’m not saying they’re lying, they said something rather similar for last years E3, and we know how that ended. I personally feel like we will get a couple 2019 announcements for Switch, but I will not be shocked if they only show 2018 titles, and you shouldn’t be either. Now let’s get started!

Presentation:  Last years showcase was 25 minutes long. I think this years will be a little longer, maybe around 30-40 minutes. They have a lot of show, just based on the announced games, and I think we see a bunch of new titles both 1st and 3rd party. I also believe we will see no 3DS games during the showcase, they will have their spotlight during the Treehouse like last year.

Super Smash Bros: We already know this is coming, I believe this will be the last trailer of the presentation and be similar to 4’s reveal trailer where we get 2-3 new character announcements(more to come during the tournament and maybe at Treehouse), showing off gameplay and tons of returning characters and the trailer will lead into the first Treehouse segment, which we already know is going to focus on Smash. Smash has a ton of focus at this years E3 and I think it will launch either alongside the Online service in September or November. 100/100

Fire Emblem:  We heard about this game coming to Switch in 2018 in the FE Direct right after the Switch presentation prior to launch but we haven’t seen anything of it yet. I think E3 will change that with a trailer during the spotlight and a bunch of time during the Treehouse. This game has a good chance of being a 2018 release, which could be October or November but it wouldn’t surprise me if it slipped into next year. 95/100

Yoshi: We saw this game last E3 with a 2018 release date. But we haven’t seen it since nor have we gotten a title. I think this game finally gets a title and a potential August/October release date. 95/100

Pokemon: Let’s Go Eevee and Pikachu: Originally I was speculating if we would see Pokemon be announced at E3, but it was announced this week! Launching as the big, or at least one of the big holiday games. I do not think we see this during the showcase but I 100% think we see it talked about and played during the three days of Nintendo Treehouse. 100/100

Animal Crossing: One of the most anticipated reveals. Nintendo fans want Animal Crossing, and believe it will happen since the Animal Crossing site was getting revamped a month or so ago. I do think Animal Crossing will be shown at E3, but I don’t know if it has a chance of launching this holiday because of how packed the 2nd half of the year is already getting. 75/100

Metroid Prime 4: Another game that was revealed at last E3, but only with a title card. This game has no chance of releasing this year in my opinion but I do think they have to update us on this game. I don’t see this game not at least being talked about E3 but I expect it to be shown. 80/100

Pikmin 4: Miyamoto has been talking about this game as early as fall of 2015, and as recently as last years E3 in an interview. This is one of the new announcements that I highly suspect will be announced and could be released this year. This could also fit as a August game, but it would also work as a game that releases in December. Whenever it launches, I do think we see it in June but likely releases in 2019. 80/100

2D Mario/Mario Maker 2: We haven’t had a 2D Mario game in a while. I think now is the time to get one on the Switch. I don’t know which is more likely, 2D Mario or another Mario Maker. But either or, I could see one releasing sometime this year or early next year. There are currently rumors that a New Super Mario Bros U port with new content  may show up at E3. 80/100

Mario Party 11: Mario Party games have been releasing nearly every year, it wouldnt shock me if Mario Party finally makes the Switch this year. I would hope they return to the old formula of Mario Party but it’s too early to guess if it will. 70/100

Another Wii U Port(or 3!): I could see at least one Wii U port being announced at E3. Whether it be the Zelda Remakes, Mario Maker, Wonderful 101, etc. This could also be the New Super Mario Bros U port that I mentioned in the 2D Mario section. I see one of these showing up at E3!. 85/100

Luigi’s Mansion: Given we just got an announcement of a Luigi’s Mansion remake on 3DS I don’t think we will be seeing a new one for Switch yet, maybe one could be announced sometime next year or at least after the port releases, I just don’t think we see one release until Fall 2019 at the earliest. 30/100

Starfox Grand Prix: I normally would’ve said that we wont get anything Star Fox related this year but we recently got rumors of a Star Fox racing game made by Retro Studios and I wouldn’t be surprised if it’s real. 70/100

Kid Icarus: Given Sakurai was the developer of Kid Icarus Uprising and seemingly has his full attention on the Switch version of Super Smash Bros I don’t think we see one being announced yet. There of course is a chance that someone else is making it but I don’t think that’s likely. 20/100

Luigi’s Mansion: Announced in the March Nintendo Direct, the port of Luigi’s Mansion coming to 3DS is coming out this year. I think we see a new trailer during Nintendo Treehouse and a release date in October. 100/100

Wario Ware Gold: Also announced in the March Direct, this Wario Ware game is launching in early August. We will most likely see gameplay at Treehouse. 98/100

Mario & Luigi Bowsers Inside Story: Another game announced during the March Direct. Given this launches next year, I could see it being not ready to see actual gameplay at Treehouse, but I wouldn’t be shocked if we saw it. 75/100

Link’s Awakening Remake: There has been plenty of rumors about the 3DS getting another Zelda game, and another remake at that. Given so many people have been talking about this it may be credible. However I don’t think it’s a safe bet and wouldn’t be surprised if it didn’t make an appearance. 50/100

Splatoon 2 Octo Expansion: I think we see this either mentioned during treehouse alongside more free Splatoon 2 DLC or at Treehouse. I also think we get the release date of July 13th, which has been rumored for a while now and coincide with the Pearl and Marina Amiibo release. 100/100

Super Mario Odyssey: Kingdom DLC would be genius for Odyssey, but i’m not sure if Nintendo will make it instead of just starting on the new game. I really want a Delfino Island Kingdom but i’m not sure how likely that’ll be, but E3 is the time to announce it if it’s happening. 65/100

Mario+Rabbids: We have seen tons on the Mario Rabbids DLC but we only know it’s releasing in June. I see it being shown during Treehouse and either gets released during E3 or in late June. 85/100

Mario Kart 8 Deluxe: We know Mario Kart 9 is probably a ways off so a solution could be more paid DLC to add tracks and characters. But given it’s already been over a year since the game launched I don’t think they’re going to do this. It would be smart however since the game is one of the best selling games on the Switch. 45/100

There we have it, this is what I could see being announced at E3 2018 for Nintendo. What do you guys think will be announced? Let me know in the comments or on Twitter!

Also, i’m holding a giveaway, if you come the closest to correctly predicting Nintendo’s E3 press conference you can win a $50 Nintendo eShop gift card! Enter by June 10th!

-GIVEAWAY-
Do you think you can predict Nintendo's E3 presentation? Do you also want to win a $50 Eshop gift card? Well you've come to the right place. If you can successfully predict the E3 presentation and get the most things right you will win the gift card. Rules below: pic.twitter.com/YSLYenPszX