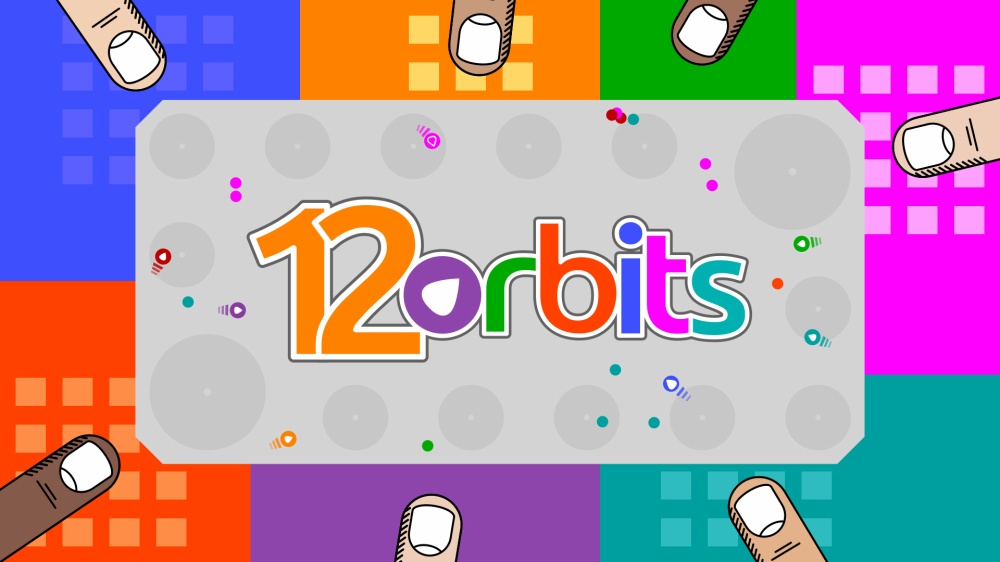 12 Orbits, from developer Roman Uhlig, is a hard game to figure out, but simple enough that anyone can join in and play. Being able to play a game on the go is one of the Nintendo Switch’s more appealing aspects and 12 Orbits fills this niche perfectly. This is great on its own, but the overly simplistic nature of 12 Orbits can be a major turn-off, especially with all the great multiplayer options already available on the Switch.

12 Orbits is a local-multiplayer arcade styled title with an interesting concept. Up to 12 (yes, 12) other players can control little colored orbs with a single button press. Mainly your goal will be to dodge different colored orbs, try to score goals, and toss orbs at other players to take them out. There are four game modes with options for teams or versus, with each player controlling a different colored orb and guiding the orb either using a face button, d-pad direction, or the touch-pad itself.

You do not control the orb’s motions, but instead, a single button press serves two functions. There are round fields within each map that act similarly to gravity wells, and when you press your button within the field, your orb will orbit the circular field. When you push the button again it will shoot out in whatever direction it was traveling while circling the field. Pressing the button again will launch the orb out of orbit and this is the only way to change directions. If you press the button outside the round field, you will get a speed boost and this is used to dodge through other colored orbs.

The four modes included are Arena, Trails, Blizzard, and Multiball modes, each providing a unique take on what your end goal is. Arena mode is the most basic with there being white orbs that appear and your goal is to bump into these to change them to your color. Once they’re your color you have to hit them at your opponents in order to knock them out as they become deadly to anyone of the opposite color. Trails mode is 12 Orbits’ version of Snake, in which you amass a longer tail as you collect the white orbs in order for your opponent to run into it.

Blizzard mode is the first team-based game type and this is where the screen is split into two where each team is on a different side. Orbs move along the center line and your goal is to knock these orbs into your opponent’s goal area. When an orb is hit, it changes color and it’s up to the other side to prevent these colored orbs from heading into their goal. Lastly, there is Multiball mode where at the start of a match there are two orbs moving around a gravity well and you’re tasked hitting these orbs into your opponent’s small goal.

These modes are fun for a short time, but my main complaint with 12 Orbits is just how bland and repetitive it can become. Once the novelty of playing with 12 other players wears off, there’s just not enough content to keep coming back for. Furthermore, there did not seem to be enough space around one device to comfortably play with using one Joy-Con alone being a chore, even with one-touch button controls. The sweet spot seemed to be four players, as there was always enough hectic fun to be had in small gameplay sessions. Also, the lack of online play and single-player content further diminishes the staying power of 12 orbits.

Visually, 12 Orbits’ minimalistic nature worked well for the graphical style with simple menus and stages to play on. There are grey backgrounds, surrounded by multiple bright colors providing some nice clean visuals. The graphics are fine, but the overly simplistic nature makes it hard to believe this was the developer’s grand vision. The music was also pleasant with an electronic beat to accompany the action on-screen. It’s your general techno ambient flare and won’t blow you away, but it worked well for the title.

Overall, 12 Orbits is a fairly competent multiplayer title that is simple in execution, but fun to play in short bouts. I admire what the developers were trying to accomplish here, and with a bit more polish could have been a more in-depth competitive title. The replay value and overall bland presentation hamper the fun, but given the cheap $1.99 price point there should be enough fun to be had for a few days at least.