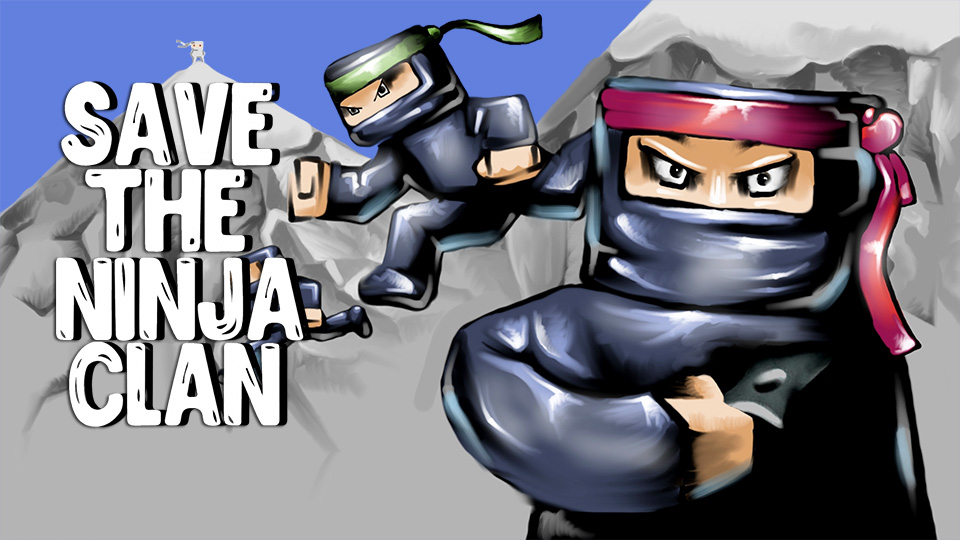 Ever since Super Meat Boy released we’ve seen a large variety of differently styled hardcore platformers, and there is a new one by developer Sometimes You which tries to live up to some of the best with Save the Ninja Clan. With the amount of quality indie platforming titles being released on the Nintendo Switch some are going to fall through the cracks, and unfortunately Save the Ninja Clan might not be worth your time, but it can also be a fun budget platformer for those who can’t get enough of them.

Save the Ninja Clan is a relatively simplistic difficult platformer, featuring three different worlds with ten levels each and three bosses at the end of each world. Your goal is to attempt to rescue your fellow ninja friends who’ve been kidnapped by an evil ninja. Taking a cue from Super Meat Boy, you will definitely die many times as you try to learn how to maneuver through traps and around obstacles in order to complete each stage.

The visual presentation is simple, but looks clean and has enough variation between levels as to not get boring too fast. Unfortunately, the simplicity may be a turn off as it can sometimes come across as made in a program like Microsoft Paint. It does get the job done though, and the visual aesthetic matches well with the gameplay and music to create a light-hearted affair amongst the constant deaths.

You start out with only a double-jump, but two more moves are thrown into the mix later, including a dash function and the ability to disappear and teleport. You only have one of these moves at a time, but as you go through a level you might come across a glowing covered object which changes your ninja into the other versions. In addition to just getting through each level, there is an in-game clock that tracks how long you’ve been in each level. This is a great way to encourage speed running and how adds incentive to retry previous levels.

There are many instant death traps, whether it be spike pits, giant saws, or lasers which can vaporize your ninja if you’re not careful. While traveling through a level there are collectables to be on the lookout for, including different throwing knife modifications, and each stage has a symbol you can find on your way to completing it. Save the Ninja Clan also keeps track of many different stats and once a stage is complete you can see a replay of the usually insane number of deaths your ninja endured, which was amusing, to say the least.

Hidden in some of the stages are bonus areas which appear to be glitched out and are neat to find. This alternate story mode has you attempt to annoy the Game Manager and once a glitch is found he antagonize you in a small text boss. The fourth wall breaking feature lead to some funny moments and eventually if you annoy him enough he will just let you pass to the next level.

At the end of each one of the worlds is a boss fight which mostly just involves guiding your ninja through obstacles while running away from the boss. The platforming controls are decent with a physics engine I could never fully get the hang of. You’ll be able to jump up and slide down walls, use your throwing knives to build small platforms, and gain momentum from fans in the environments.

Overall, Save the Ninja Clan is a traditional difficult platformer with some clever ideas, but comes off as bland and not very compelling in the long run. Thankfully, the low price point adds some incentive to give it a shot as there is fun to be had and the difficulty never became much of an issue because of the ability to adjust the game speed in the menus. Save the Ninja Clan is nowhere near as good as some other platformers on the Switch, but it can be fun for the limited time it takes to complete.