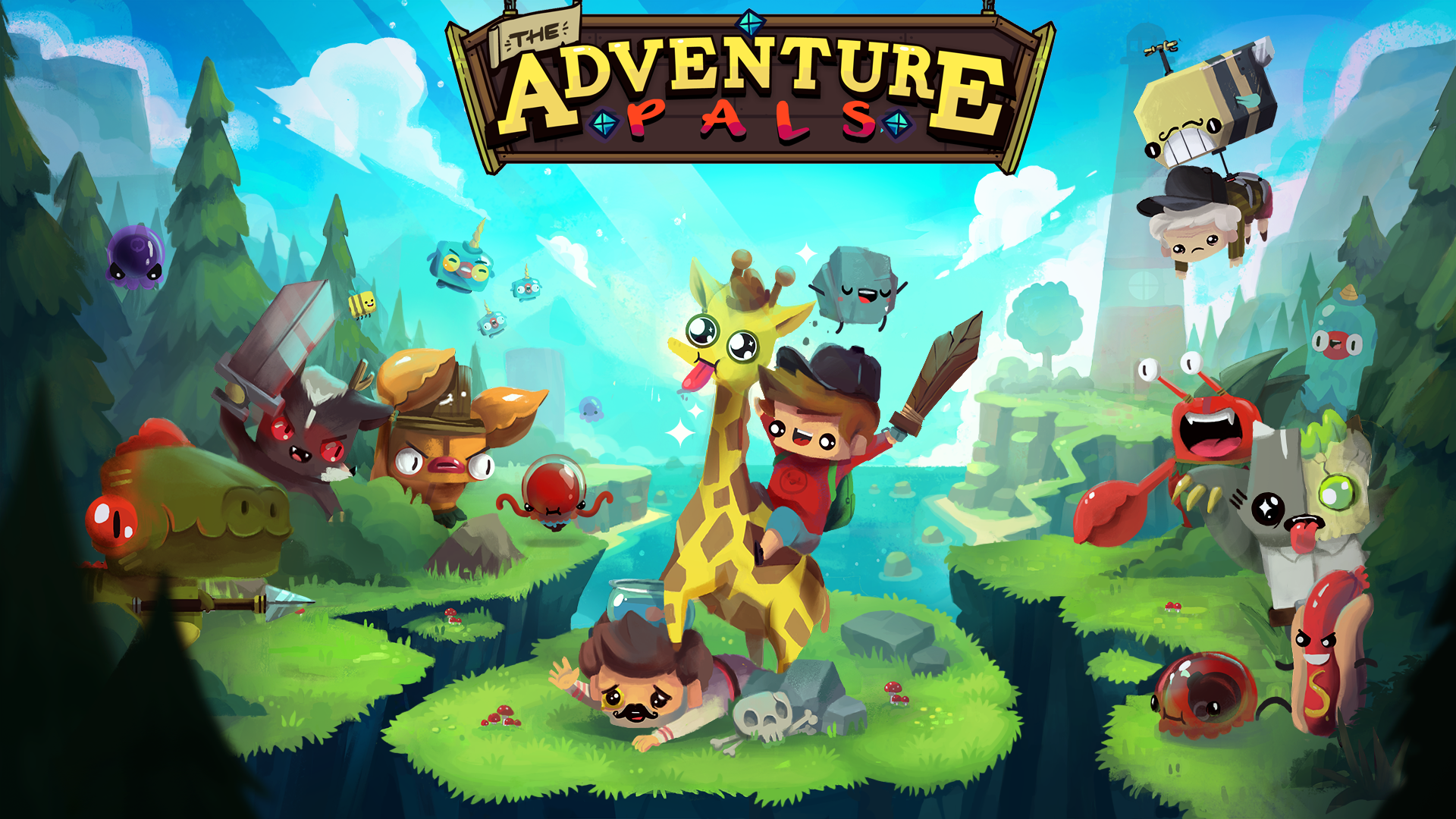 April 8, 2018 7:23 am Published by minusthebrant Leave your thoughts

The Adventure Pals is a new action-platformer for the Nintendo Switch with a huge amount of charm and feels like the Adventure Time game I’ve always wanted, featuring characters that would fit right in with the show. You play as a boy who’s birthday is ruined in an odd turn of events and now must with his friends to thwart this madman. I was pleasantly surprised being immersed in a land filled with beautiful hand-drawn animations, discovering friendship, exploration, and satisfying gameplay.

The Adventure Pals stars a little boy in the middle of celebrating his birthday. Your in-game mother wakes you up to surprise you with a birthday gift. This celebration is unfortunately cut short when your father is kidnapped by the evil Mr. B. Being the completely evil villain he is Mr. B offers to return your father to you in exchange for some rubies. Now, you must go on a crazy adventure and collect these rubies in order to save your father. You won’t be alone though, as you have a pet giraffe and your best friend, a rock, to aid you on your journey.

The story is told entirely by in-game text boxes and while I usually prefer voice dialogue, the writing for the characters benefits the story. You’ll come across the likes of a man who is looking for his wife and a whale who lacks self-confidence. Both are hilarious and these humorous conversations only scratch the surface of The Adventure Pals unique cast of characters. This may not be an official Adventure Time game, but the inspiration certainly there.

While exploring the world, it is broken down into five main areas each with their own levels and quests. The ultimate goal is to collect enough rubies to pay back the ransom to save your dad. Each domain can be broken up into a handful of levels, quests, mini-games and feature a hub area. With your pet giraffe at your side, you complete these individual stages with secrets, rubies, and enemies to fight with.

Each level is usually divided into sections with checkpoints at the start of every section. Right at the start, you’ll have a sword you can use to defeat other enemies getting in your way. In the earlier parts of the game, combat can quickly be performed by simply mashing the Y button, but the attack patterns branch out as you level up. Every enemy you defeat drop these blue XP orbs that help you level up and when you gather enough XP you are given the chance to unlock a new skill. Usually, three options are given to choose from and may include the option to have a larger backpack for storing items, or a stronger attack against shields. These upgrades help flesh out the combat with new abilities to make combat feel more engaging.

Your giraffe friend isn’t an ordinary giraffe, as he can help out by using his tongue like a helicopter propeller to glide in the air, similar to Sonic’s companion Tails when he uses his two tails to propel himself. In addition to having your giraffe, you also have your best friend, a rock, but this isn’t just a normal rock though. The rock can actually help you fend off enemies around you with some of the upgrades mentioned earlier. Platforming in The Adventure Pals feels overly floaty, though I didn’t mind it too much. It felt like a slowed down Super Meat Boy physics engine that may be lighter, but you can still perform wall jumps with ease.

At the end of every level is a ruby you can collect, but even more fun are the secrets you can collect. Throughout the levels you can find cupcakes, stickers, and occasionally items you can use during quests. Cupcakes are used to unlock costumes for your group of friends and are as dorky as they are adorable. The stickers you find are collectables that go into your sticker book. This provided a neat little incentive to fully explore each stage as some stickers were from other games.

Outside of the main levels, you can compete in mini-arenas. Each domain features an arena that acts as a survival mode for The Adventure Pals. You take on rounds of enemies that get progressively more challenging and if you survive all the rounds you’ll be rewarded with prizes you can use in other levels. Along with arenas, each domain has a hub area and a shop. In these areas, you can shop for items that can be used in other levels, such as health potions, bombs, and invincibility potions. You’ll also come across quirky and charming NPC’s usually offering quests that are in the next level.

Each domain ends with a boss fight that ends up usually being the most visually interesting parts of the game. Somewhat like a Kirby title, they weren’t the most challenging parts of The Adventure Pals, but they were certainly some of the most enjoyable. The overall campaign should take close to ten hours to complete, although longer if you try to collect all the stickers and other items in a level. There is a little more replay value in the form of co-op play, however much like the New Super Mario Bros. games, the co-op feels more like you are being dragged along rather than actually helping out.

The Adventure Pals looks like a storybook world come to life with a hand-drawn aesthetic that looks bright and colorful. There is a lovely use of gamma rays and backdrop layers in every stage, and the end result is a charming art style that looks mostly stunning and remarkable. One thing I wish could have been changed up more are the backgrounds as they look great, but seem to not have enough animation to really stick out. Also, the music is very peppy and certainly sounds like something you would find in a Kirby game. While most of it is charming, there are a good amount of the songs that sound epic that could fit into most Saturday morning cartoons.

Overall, The Adventure Pals is a delightful action-adventure platformer that delivers a grand and enduring experience. The adventure will take you across five different domains, each with their own sections for levels, bosses, mini-games, and the witty cast of characters. The platforming and combat felt solid and featured a charming presentation throughout the game. The co-op might feel half-baked, but it was nice to have the option. The Adventure Pals is a marvelous adventure worth taking that I recommend for any type of gamer.