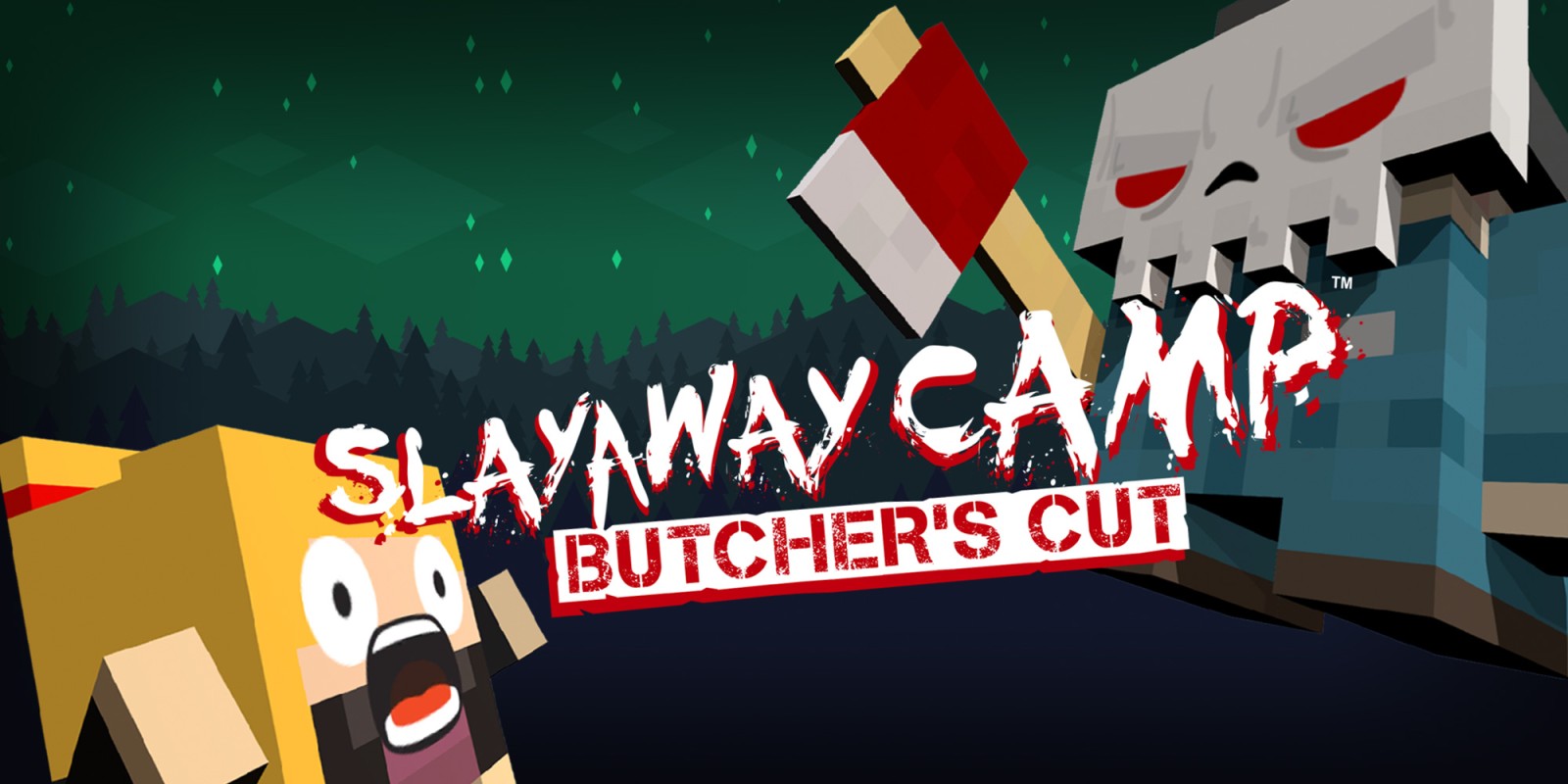 There’s a camp for everything these days, but if it’s a camp for getting murdered you’re after, than Slayaway Camp has your name all over it!

From Blue Wizard Digital, Slayaway Camp: Butcher’s Cut is a sliding puzzle horror game that is all about making the right moves to end the life of your hapless victims and evade capture and it’s actually insanely fun. Unlike 80’s horror movies, the majority of which were horrendously bad, Slayaway Camp is 80’s horror done right, in an art style very similar to Minecraft. In fact, if you were to walk out of the room your child is in playing Minecraft in and then return a few minutes later and they’re playing Slayaway, you would think it’s the same game, except little Jimmy is now off on a murderous rampage.

Clearly the two are not the same game, as there are plenty of differences between them and while one is a horror title that is all about murdering, how you experience Slayaway Camp: Butcher’s Cut is up to you, as there is a mode that makes everything family friendly, which removes all blood, gore and the over the top kill sequences, allowing Slayaway Camp: Butcher’s Cut to be a simple sliding puzzle game, but having tried it, it is not the true way to play Slayaway. I’m not going to condone shooting games that lets you see kills play out in slow-motion and have skulls explode upon impact with a bullet, but there’s a reason why shooting games are popular. It’s the same reason horror films, even the bad ones, are popular and it’s because we want to see the core.

As a viewer and a gamer, sometimes that speck or full on other self of darkness that resides in us all, just wants to see humanity acting out as the beast we are and bear witness to another brutal kill. Yes, it’s wrong, but the good news with Slayaway and its blocky, child-friendly graphics, is that each one of the extravagant and brutal slaughters is nowhere near as grotesque as they could have been, so you are welcome to enjoy them. In fact, if you play with the full gore intact, you deserve to enjoy them as they can be highly entertaining and you do have to work for them!

On the subject of working for them, I suppose we should talk a bit about gameplay and content. Gameplay is divided by 10 VHS horror films, often made up of 10-15 scenes (aka levels.). Obviously, the films are parodies of real-world horror films, but most of them are all to do with the Slayaway series, with the films requiring you to beat the ones previously available to you, to unlock them. Upon selecting your film of choice, the film will begin with an opening cut-scene to set the scene, before the movie can properly commence and you must spend each of the film’s various scenes, navigating an isometric grid environment to kill all civilians present, and make it to the portal that opens when enough blood has been spilt.

Being a sliding puzzle gam that only lets you move up, down, left and right, all the way until you hit something like the edge of a screen, or a structure, free movement is not on your side, so there is no running straight at your victim and hacking them to pieces. Instead, you are forced how best to navigate a path to them, which in the earlier scenes is easy to do, but it soon gets harder the more you play. With obstacles such as holes, fires and water, going into any of them, will kill you and your victims. (No one in Slayaway Camp: Butcher’s Cut, knows how to swim sadly. I guess they were all too busy watching 80’s horror movies to learn.)

If you get stuck though, due to being a film, you can always use the R button to fast forward and get a tip (they only cost you 25 Skull Coins,) or you can fast forward straight to the solution, but that will cost you 100 Skull Coins. Should you prove smart enough to figure out what needs to be done, but made one wrong step, then the L button is your best friend as that will allow you to undo every step you made, every time you press it, until you’re back to the beginning of the scene. If you want a different perspective however and want to see everything from a top-down point of view, don’t be afraid to press the Y button.

In the event you do make it through a scene, including the ones that feature cops with guns, levels that need to be completed within a set number of turns and phones that can be used as traps, there’s more killing to be done. You see, in between scenes, there are instances where Skullface (voiced by Mark Meer of Male Commander Shepard/Mass Effect fame) can end another life, if the player can press the A button, at just the right time (there’s a bar on the bottom of the screen and you want to press A when the moving marker, is within the red bar.)

Depending on when you press A, will determine how many coins you earn, which is certainly something you will want to do, because in addition to being able to use them for buying tips, you can also buy new playable killers (of which there are more than 60,) and there are more than 90 Gorepacks, which are OTT kills that can be watched at any time you feel like from the pause screen and encountered upon between scenes. But if plenty of collectables are not to your liking, with responsive touch-screen controls, more than 300 solvable puzzles, hilarious screams and a killer soundtrack not to be missed, Slayaway does have plenty going on and to come back to!

Like some 80’s horror movies, Slayaway Camp: Butcher’s Cut is a classical gem, made even better due to it being the expanded version, limited only to consoles. Yes, it’s overly gory, but it is all part of the fun that will have you smiling, as opposed to ducking beneath the sheets. So, if you’re looking for a puzzle game that will have you coming back for more, even if you do have to tone it down, Slayaway Camp: Butcher’s Cut is pretty awesome!