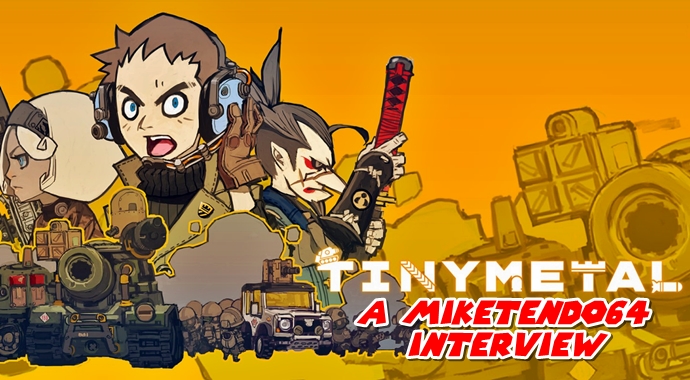 Advance Wars might not be getting a Switch revival any time soon, but thanks to Area35 and Unties, we did get an Advance Wars like game last year on Nintendo Switch. TINY METAL might not have had the strongest of starts, when it released, but thanks to continued support post-release, it is getting better, bit by bit and having reviewed it earlier this year, we took it upon ourselves to learn even more about TINY METAL, via an interview with the Director of the game. Here’s how we got on:

In typical interview fashion, would you be so kind to introduce yourself to our readers and tell us a bit about your involvement with TINY METAL?

Hiroaki Yura: My name is Hiroaki Yura, and I am AREA 35’s director and producer of TINY METAL.

TINY METAL in a Nutshell:

Miketendo64: For our readers who have never heard of TINY METAL, what is it, and how does it play?

Miketendo64: Other than the Advance Wars, which TINY METAL draws inspiration from, what other game inspired TINY METAL?

Hiroaki Yura: Some our designs drew some of their inspiration from the hit classic Metal Slug!

Miketendo64: There has been a fair bit of uproar as regards to funds from a previous Kickstarter campaign of yours and secretly used the funds to help develop TINY METAL. Could you help clear the air to put this malicious rumour to rest?

Hiroaki Yura: Well we’ve done what we can to clear everything already, we’ve shown proof such as bank statements and legal documents to Gamespot, US Gamer etc. TINY METAL’s funds came from private investors, Sony Music Entertainment and a small portion of my own private money, which came from a different project.

We believe there are other intentions at work here, and we are currently in the middle of legal proceedings to clear this up to the public.

Miketendo64: The next big update for TINY METAL is Multiplayer mode. Once Multiplayer has been patched into the game, what is the next big step for Tiny Metal?

Hiroaki Yura: Of course making TINY METAL even better! And new maps and new units! Of course the next big step for TINY METAL is TINY METAL 2!

Miketendo64: Since the launch, how have you found fan feedback and has there been any discussing with regards to a sequel?

Hiroaki Yura: The fan feedback has been great, and we’ve been putting a lot of effort into responding to them. We’re still far from the sequel, as we have a load of free updates in the future for TINY METAL.

Miketendo64: As a game on a number of platforms already, how did you find porting it to the Nintendo Switch and what is your thoughts regarding Nintendo’s hard-hitting platform?

Hiroaki Yura: When we first received the Nintendo Switch Devkit it was about 2 weeks before the release of the Switch. At that point in time the SDK and middleware were pretty rough. As time went on bugs got fixed and things stabilised. Ignoring the now fixed bugs and pain points the Nintendo Switch’s development process is next level. It is clear Nintendo has put incredible effort into making the Switch easy to develop for.

It is still much harder than releasing for PC by its nature as a console but I can see Nintendo has made sacrifices to make ease of development a priority. At time of TINY METAL’s release the PS4’s SDKs were more polished and had fewer bugs, but I think it is only a matter of time before the Switch’s SDKs match and surpass that level. Talking with other developers targeting the Switch I have heard the same feelings. Everyone I have talked with has been thankful for the effort Nintendo is putting into the SDK.

Miketendo64: TINY METAL has some awful framerate and performance issues when undocked. Will these be amended when the next update rolls out and are there any plans for adding video capture support?

Hiroaki Yura: Daniel is constantly working to improve the rendering performance on the Switch.  He spent months optimizing it before release and he has continued to invest time into the task. At launch TINY METAL was the only UE4 game on the Switch which ran at full resolution in undocked mode. Daniel has improved controller responsiveness in a recent patch. Going forward we are excited by the resolution scaling features landing in UE4.19. For the multiplayer patch Daniel is considering implementing resolution scaling as a feature enable-able from the settings menu.

Hiroaki Yura: Thank you so much for playing TINY METAL, we really appreciate your love and feedback. The community has been great towards us and have supported our development and without the encouragement, I don’t think we could have come this far. Please look forward to the future as we strive to make many great patches and new content!

Thank you Hiroaki for taking the time to answer our questions.