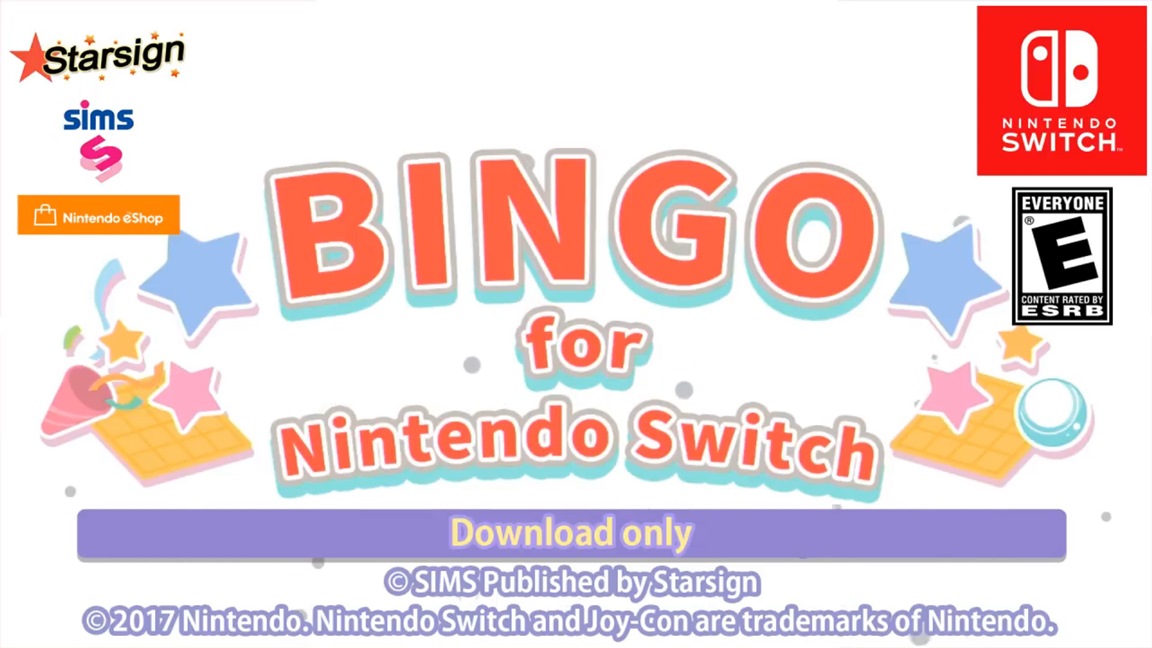 Grandma’s Getting Frisky! No, we’re not being dirty, that’s just the Bingo call for 60!

Having only one other notable title being “Super Ping Pong Trick Shot” that released last year on Nintendo Switch, (BINGO for Switch being their 2nd game) Starsign is mainly known for their many variations of different arcade themed games and their past releases on Nintendo 3DS. Does Bingo for Nintendo Switch stand out as the best Bingo game offered on the platform? Let’s find out!

The gameplay is quite simple, a random number is chosen and your goal is to find that number and mark it off on your Bingo card. Your goal is to get 5 in a row on a single card against CPU opponents and you win the game! What happens if you miss a number on your card? Well, the number will turn the tile black and you’ll no longer be able to score a bingo in that column. You’ll also be faced with a penalty of a skipped turn if you accidentally press the wrong number.

You’d be quite surprised at how many different variations of the classic game of Bingo exist in this piece of software on Nintendo Switch. Other than the “Classic” game of Bingo mentioned above, the game also offers Buzzer Bingo, Slide Bingo, & Bingo Poker. Buzzer Bingo has you compete to see who can get the number that appears the fastest. Slide Bingo has you move the various rows on your card to align all five red titles into a single row. Bingo Poker has you draw a number and then has you discard one like the classic game of Poker. All these modes and more can be played via local multiplayer with 2-4 players and individual horizontal Joy-Con.

The visuals and soundtrack are what you would expect from a game as simple as Bingo. To me, they came off as if the game was originally a mobile title, but they look fine for a game as simple as this. Bingo for Nintendo Switch is as visually appealing as you can get for this type of game, just look at the game’s colorful icon. You don’t need high-resolution visuals or graphics for a game like this on the system. Regarding the soundtrack, if you like listening to the same background music over and over again during your game of Bingo then you’ll enjoy this game. The music is definitely repetitive and catchy in nature but doesn’t offer any variety when going between the different Bingo modes in the title. The music is on a continuous loop as soon as you open the game.

While being interested in this game myself, I can definitely say in my mind that this is indeed the best you can get for a Bingo game on the Nintendo Switch. While staying true to the original game, the game offers a wide array of different modes and styles of gameplay all for a low price. Looking for a great multiplayer game for family hangouts? Then check out the 2-4 player local multiplayer mode that is offered. If you’re a fan of Bingo and want to play it wherever and whenever, then I’d recommend Bingo for Nintendo Switch.

Does BINGO for Nintendo Switch stand out as the best (and only) Bingo game on the platform? In my opinion, it definitely does. With a large variety of different play opportunities, staying true to the original gameplay while adding some unique twists, and it’s visually appealing and colorful nature, this game is definitely a must own for those who love the classic game of Bingo! Although the soundtrack can be repetitive at times, I wouldn’t let this steer you away from picking up this game if you’re a fan. Plus, you get the awesome ability to play local multiplayer with up to four players! So there’s fun for the whole family.