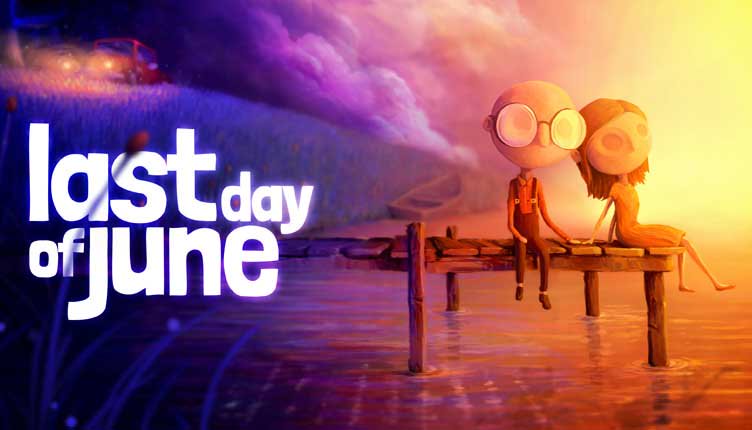 What would you do for love?

While most people use video games as a means to escape their lives, replacing the boredom of their daily routine with an epic war zone, or adventure, there are some games that pull us in completely. They drag us from our own world and right into the one created by the developers. Worlds where we are made to care about the intriguing characters as we experience their incredible stories. Games like The Walking Dead: The Telltale Series and Valiant Hearts have executed this experience stupendously and both were the only games that ever made me cry. But, now enters Last Day of June, a game that promises to tell a truly incredible and touching story. The only question is, will it succeed?

Developed by Italy based Ovosonico and published by 505 Games, Last Day of June first showed its face when it launched on PlayStation 4 and PC in 2017 and it might surprise you to know it takes inspiration from a song. Where it really gets interesting though, is the fact that the artist responsible for the song it’s inspired by (the hauntingly beautiful Drive Home by Steven Wilson,) is actually involved with the soundtrack, along with the illustrator Hajo Mueller.

The main attraction of Last Day of June, is its story that focuses on a touching tale about a couple in love. The story starts off with us meeting the main couple, Carl and June, who go for a picnic at a lake near their village. When returning home, a tragic accident happens. June dies and Carl ends up in a wheelchair. Grieving the loss of the one he loves, Carl sets out on a path to try to change what happened that day, keeping June alive.

I have to admit that I felt deeply connected to the story and the characters and I reacted to every new change that was presented as I changed the past. I got involved in a way the few other games have done to me and when the end came, it struck me in such a way, I felt it on every level. I didn’t really cry like with the other games, but I stood still, seeing the story finally unfold and my eyes filled with a few tears. I also really like the fact that the ending is easily understandable if you don’t want to think, but it is also left open for interpretation if you want to dig more in what happened throughout the story. Naturally, I have my own interpretation, but if you end up playing it, I would love to hear yours.

That impact was done through the story, but also, through its visuals. The game chose a unique visual style for its characters and world that stand out from other games. All of the locations and characters, keep the appearance of being molded out of clay. This, together with the setting in a small village, creates a beautifully crafted space that pleases the eye, but feels natural at the same time, even if the characters don’t have eyes.

When you play the game, you will notice that there aren’t any understandable lines. All that the characters express, are sounds in a made up language and the exclamations we use to express some emotions. That made me like the game even more as the game ends up having almost no language barrier. All that needs to be told to the player is done through the brilliant character animation. It is easily noticeable how much love and attention went into doing all these expressive animations and even the few instances that it presents words in our language, it can be understood by the context if you don’t know any of the many languages available.

That only thing that is a little bummer in the visual department, is the fact that there are a few problems with the framerate and stuttering that prevents the game from running totally smooth. It can, in some cases, slow down some animations to the point that they stop feeling natural. But the slowdowns and stuttering don’t ever last for too long, as they only last for 1 or 2 seconds maximum. After a while, I ignored this problem and it stopped interfering with my enjoyment of the game. Some noise and shadow pop-ins are also noticeable, but it wasn’t a problem for me.

To complement the amazing story and visuals, the game needed an excellent score. So, it was fitting that the guy, whose song inspired the game, was called to compose it and it is brilliant. Every song and sound effect are meticulously placed in a certain part of the story, to create a certain feeling or emotion on the player. This game wouldn’t be as incredible as it is without the soundtrack. My favorite has to be the song of the final scene before the credits.

Gameplay-wise, the game works like a puzzle. When you select a person’s portrait, you take control of that character and can change the actions that he took and also alter the state of the world. This creates a unique mechanic where you have to switch between portraits, sometimes, undoing actions in one portrait to be able to change something in the other that will help you save June. This mechanic is also related to getting access to the game’s collectible: photos of each character. This collectible is interesting, as it offers more details into the background of the character other than the main couple, allowing you to learn even more about their personality and what lead them to be who they are today.

The only thing that bothers about this mechanic is that every time you finish altering the reality of one of the character, you are treated to a cut-scene showing the outcome of the actions of all the characters combined. This means that you will probably end up seeing the same cut-scene over and over again. This can get tiresome as you can’t skip them. I think that this was done to reinforce the idea that your actions have an impact, but a skip option would be a good thing.

Finally, I really liked that they invested in implementing the HD Rumble in a few situations and they felt fitting and well executed. The best use happens at the beginning of the game, when it starts raining and the control vibrates according to the noises of the thunder.

Last Day of June is a gut-wrenching story told through an interesting mechanic and amazing world and character animation and building, that will certainly connect with you and leave you interested throughout this journey. Sadly, it is a one in a lifetime experience, with nothing else to do, except finding all 20 memories, but that it is well worth the price of admission for those who like a well-developed story wrapped in good visuals and music.