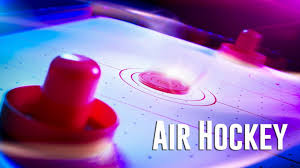 Having already reviewed one of Sabec’s Switch offerings this month, it’s time to go hands-on with another. Will it do any better? Let’s find out.

Like their mobile offerings, Air Hockey is another Sabec arcade title that opts for less is more. Naturally, there is no story, only gameplay and even then it is pretty bare bones as it’s exactly what you would expect it consists of. You hit a hockey puck back and forth with a striker (paddle) and try to be the first player to score seven points. (Just like playing the game in a real life arcade!) As for the controls you’ll need to memorise, it’s simply the analog sticks on the Joy-Con to move your paddle around the table and strike the puck as no other, as they’re all you need to know, to actually play. That being said, if you press the Y button, it will allow you to change the angle of the table so you can go for a top-down point of view that offers a full view of the entire table. As for the opponent you will go up against, depends on you. If you have a friend to play against, via local multiplayer, you can play with them, or take your chances against the AI, whose level can be adjusted to be more or less of a challenge for you.

Visually, Air Hockey looks alright for a mobile port, but I wouldn’t say they are the greatest in the world. They look just about as good as they can get for a game this simple and vastly resemble the visuals typically found in a made for mobile title. Air Hockey also reuses the same background for when you’re playing, or just on the main menu, so it soon got bland to look at. Worse than the tame graphics, the soundtrack is not much to go on about either, as there is no background music when you play. There are however sound effects present, which you can hear when you hit the puck and score.

Much like Spot The Difference: Ultimate Edition, despite being interested in Air Hockey, to begin with, it’s one of those games that are fun for a couple minutes and better suited to being played in short sessions. However, it stays true to the original arcade game gameplay-wise, but that alone doesn’t justify it as being a must-own game on Nintendo Switch. Sure it is the first Air Hockey game on the Switch, but in my find, I’d much rather be playing Air Hockey for real.

Now, if I had to list just one issue I had, it would have to be how clunky the controls felt. Moving the paddle at times with the control sticks, often felt weird/strange. Not to mention, it often felt like the paddle had delayed movements and would continue to move, even after no longer moving the control sticks. It is a shame Air Hockey did fail to please, as it could have gone on to be a much better game, had it have the chance to feature things such as online multiplayer, leaderboards for win totals, and or at least background music to listen to.

Is Air Hockey the best Air Hockey game on Nintendo Switch? Not really. The game would be better off sticking to its arcade game routes and being played in an actual arcade than on a video game system. I believe there were many missed potentials for additional modes & content that really could have made this game something else, other than the simple creation we have now that feels like a direct port, as we didn’t get anything unique/different to set itself apart. So, unless this game is a must for you, feel free to visit a local arcade and play the actual game there, as you won’t be missing out on anything.