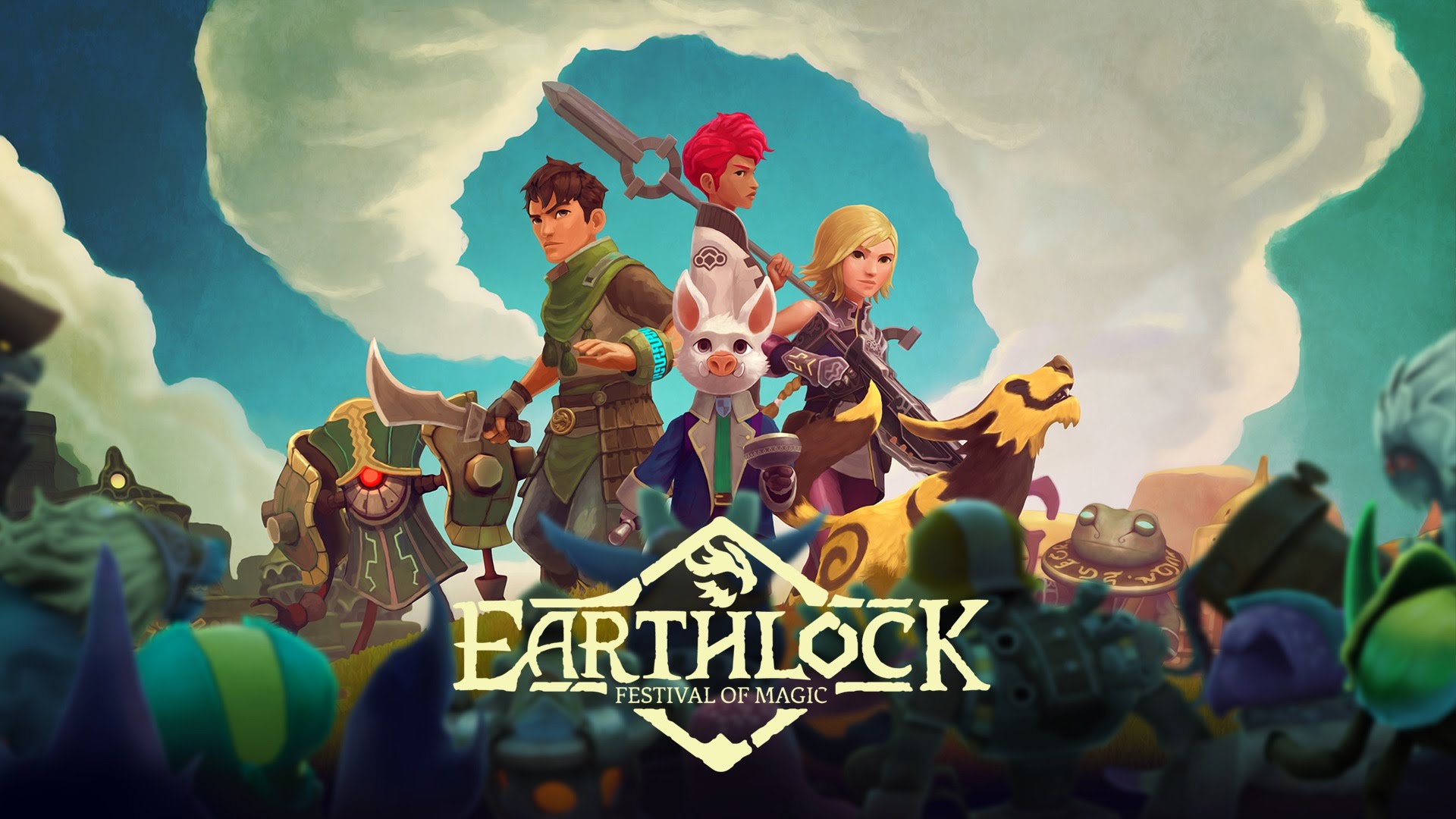 If at first, you don’t succeed, try and try again, because for Earthlock, the third time is the charm!

Revealed back in 2013 under the name of Festival of Magic, as part of a Kickstarter campaign, Snowcastle Games’ Festival of Magic, is a game that has quite the remarkable story to it. Inspired by the old RPG games Square Enix lovingly crafted, Festival of Magic, later to go on to be called Earthlock: Festival of Magic and now just going by the name of Earthlock, was something of an RPG that almost failed to live up to expectations. It has a great art design to it and an interesting set-up, but upon its initial release for various platforms, it ended up not being the remarkable title players had hoped it would be, despite having a successful Kickstarter campaign in 2014, as the 2013 one was pulled. But now everything has changed.

Earthlock is not to be a simple one-time thing, it’s meant to be the start of the series and while an Earthlock 2 is on the cards, Snowcastle Games were not satisfied with the game that did come to the likes of the Wii U thanks to a third party handling the port. So, decisions were made and Earthlock was revisited and now the game has finally become the game it was always meant to be in the eyes of its developers and it…is…fantastically engaging!

Releasing as a free update anyone who got to Earthlock: Festival of Magic on Steam Xbox One, PlayStation 4 and Gog, and as an entirely new game/revised port for Nintendo Switch this week, Earthlock has come leaps and bounds thanks to efforts of the team who spent the last year improving it and in my mind, it is great indie RPG alternative for anyone who wants a cheaper alternative to Xenoblade Chronicles 2, or just something else to play once they’ve beaten the Monolith Soft title.

Only, the changes do not come cheap, as whereas before Earthlock: Festival of Magic is $9.99 on the Wii U, Earthlock is $29.90 on the Nintendo Switch while the upgrades might not justify the additional $19.95, the changes have helped make a good game, a highly recommended one, but before we even get to the game’s story and gameplay, let’s talk about those changes in depth shall we!

First up, Story changes, while I’ll cover the general gist shortly, unlike the story as seen in the original game, the premise and events are still the same overall, but more depth has been added to, which includes new humorous dialogue, comments and events that didn’t quite make sense before, do now and the 6 playable characters, actually have a bit more of a character to them. After Story, comes Crafting, whereas before the buildings that can be discovered over on Plumpet were just buildings, now they’re the means to craft, be it potions and ammunition, made from the seeds you’re able to grow, when mixed with other items and more!

Other notable changes worth bringing up are Side Quests, which are a great way of scoring additional EXP, especially the ones you can do over and over, but they’re entirely new and they’re fun to do, whenever you get sick of constant grinding, to increase your level, just so that you can stand a chance against the current boss who is handing your butt to you. Then on top of that, to give players more to do on a game that can take between 15-25 hours to 100% complete it, there’s also mini-games such as treasure hunting, new scenes, new characters, new and improved animations and cut-scenes, an optimised performance to improve the game overall and there’s even changes the developers chose not to specify on, but hey, Earthlock has changed for the better and it shows. I will just say though, the version that is releasing, only supports English and Japanese with other languages coming later on and now onto the good stuff.

Set in the world of Umbra, long ago there was a mythic civilisation, worshipped by man. The god-like race ruled over all, thanks to their harnessing of Amri, a magical energy that was stored in the planet’s core. For a while, humanity continued their worship, but then they revolted and the core burst, spreading across all of Umbra. Volcanoes erupted and tsunamis devastated the land and before you knew it, the war was over, as the mythic race were no more and Umbra was born anew. But peace would not linger for the Amri that spread forth, would infect man, beast and flora alike for good and bad and whilst the Suvian Empire thinks times are good, a darkness is brewing and the scarred world that had stopped spinning, will find itself with a new legend to tell!

With the game’s narration over, initial gameplay starts with Ive Lavender, the daughter of the General of the House of the Great Wave and her companion Stormdog by the name of Taika. Only our time with them will be short-lived, as they merely provide us with the first of many tutorials that cover stances and battle basics. Still, just because we have to bid them farewell, it’s only temporary as they will make a return later on in the game, as the main character with whom the real adventure starts with, is with a scavenger by the name of Amon Barros, from Zaber. What would start out for him as a routine trip with Uncle Benjo, will become anything but as it’s not long before the treasure they find, leads to nothing but a whole lot of making friends and conflict.

Now, living up to the 90’s games it’s inspired by, Earthlock is similar in a lot of ways, such as being able to buy items for to restore health in battle, saving your games at Onurasi Statues that can be found all over the world and taking a rest to recover your life. The game also takes a zoomed in approach when in towns, outposts and dungeons, but zooms out when in the overworld where enemies can encountered. Getting their attention will have them come after you, and while you can escape them by running far enough, you can always press the B button before the combat engage timer runs out (seen on the bottom left-hand side of the screen,) to gain the First Strike in battle. Just be careful when you press B, as you can go into battle against a group of enemies that double the party you’re currently wielding.

When in battle, almost everything is what you would expect, as you take it in turns attack and can do things like use items and select which attacks you want, with the likes of pressing each option’s associated button once to bring up information on what will happen and pressing the button again to confirm it. But on top of combat abilities that use Amri points and can be recovered by resting, there are stances to consider. Every character has a different stance that comes with a different set of combat abilities and it allows them to do different things, such as Ive going from being able to attack enemies on the ground, to Slinger so that she can use ranged moves instead. For Amon, he can go from a thieving Thief, who can perform swift melee attacks, to a Blaster and fires a gun to deal far more devastating damage.

To really liven things up in battle though, characters who are paired up can be bonded together and when their bond is plentiful, a special stance can be used that allows you to deal even more damage with your moves and the more your bond is levelled up, the more you can use the special stance and when you are victorious, and your EXP has been earned, you can level up and make things even more interesting. Via the use of a Talent Table, your typical equipment and skill tree customisation has been altered for better and you now have the option to personalise each fighter to your own liking, as well as being able to turn on and off certain talents. Also, if you’re worried about getting confused, your worrying is for nothing as everything is explained in detail in-game and that’s just gravy! (Damn it Yew, Earthlock reminds me too much of Bravely Second: End Layer for all the right reasons!)

When not content with battling and concerning yourself with levelling up, via the R and L buttons, you can swap between any character you have in your current party, so if you see a piece of scrap in the overworld, Anon can clear that up for you, Taika can dig up treasure chests and Gnart Tigermoth, a Hogbunny and scholar for the House of the Owl Tide, can harvest any and all herbs encountered, in a bid of reaping their benefits such as a speed boost and more. There’s also an island by the name of Plumpet that will become a great hideaway for you to craft whatever you can at the time and relax, before returning to the real world and resuming the story written by comic book artist Magnus Aspli.

Now, while I would say Earthlock is near perfect in a number of ways, as it really is great and I adore the colourful cartoon-like design it wields, with an appealing soundtrack, as an RPG, there is grinding and depending on how you get on against the bosses, there can be a lot of it, but that’s expected with games like this, what isn’t expected is the bizarre glitch I encountered that saw me leaving one side of the room and appearing at the other, as if the room has been reset. But, this isn’t a game breaking bug and it’s something the developers are aware of and will take care of, it’s just ironic the bug is being cause by pretty mode a system that was devised to catch the bugs, but like I said, it is going to be taken care of and with it happening very little, it is certainly one I can live with in the meantime. After all, Earthlock is a game that simply demands to be played and play it I shall!

For now, I can’t see myself picking an RPG game that is superior to Xenoblade Chronicles 2, as I love it and its characters immensely, but Earthlock is a true indie gem that has come a long way in such short time. It’s a little pricey, but it is the second best RPG game the Nintendo Switch has to offer at this time and it definitely has me excited and interested in seeing where the Earthlock series can go from here. So, bravo Snowcastle Games, you’ve made a charming game, a positively outstanding one!