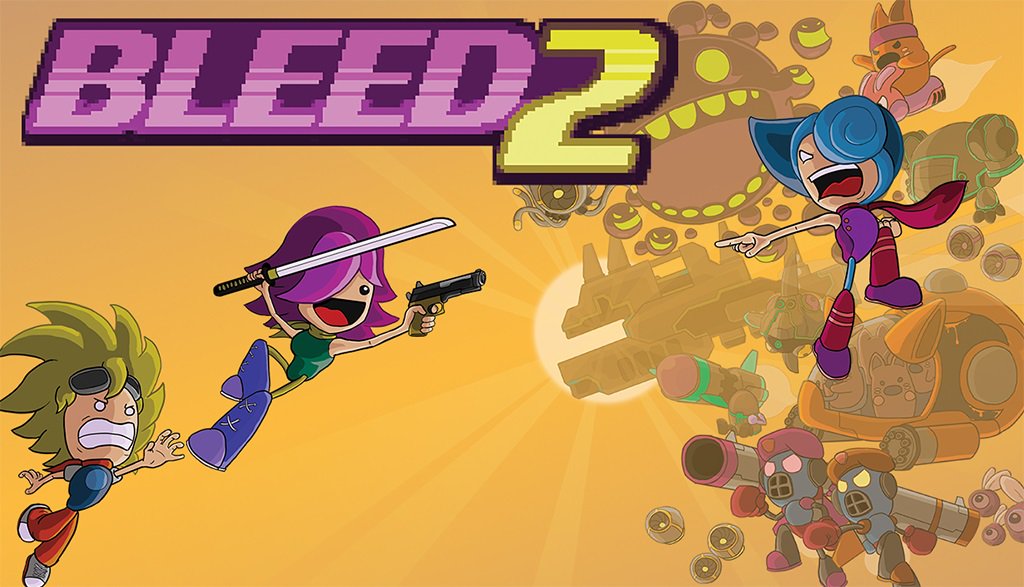 More mayhem, more action and a whole lot more Wryn! What could be wrong with that?

Good news Bleed fans, just in case one video game on Switch about a girl named Wryn wasn’t enough, Digerati Distribution have seen to it the sequel also gets the Switch treatment and it has almost everything you could want from a sequel. Like the game that came before it, Bleed 2 is a side-scrolling 2D twin-stick shooter that is all about high-speed action, except this time around, instead if Wryn having to prove herself as a hero, she is the only hero the world has and the only one it needs, but the forces of evil are at it again.

Villains have returned and The Rival, your foe from the last game is not among them, because while his beef with Wryn still stands, there is a much bigger threat that goes by the name of Valentine and The Rival isn’t afraid to put his grudge on hold to help you out, even if it is temporary. So, with a threat present, the events of Bleed 2 play out in a similar fashion as they did with Bleed and instead of having a main campaign that is much longer than the one offered in the first game, I’m sorry to disappoint you, but there are only 7 levels. 7 retro levels with an improved style over the last game that sees the return of Wryn’s ways of time manipulation (using rechargeable energy by holding ZL, to slow time down,) hectic air dodging (rapid triple jumps that can be executed with ZR) and a lot more shooting (move the right analog stick in any direction.)

Whilst on the surface Bleed 2 looks like a carbon copy of Bleed, if you scratch the surface enough, you’ll see that is simply not the case, because with Bleed 2, every time you complete a stage, with your overall performance resulting in a score, like before, the score is actually irrelevant, there are segments between levels where a newsreader updates the player on what’s going on, but the weapon system has seen an overhaul. Instead of buying and upgrading like you could in the previous game, a number of weapons are available from the beginning, which includes the Katana weapon.

In Bleed, the Katana was one of the best weapons you could get, as it could swat away any projectile fired at you, but in Bleed 2, projectiles can be regular, purple, or yellow and if it’s purple, or yellow, provided your colour matches the one you’re hitting, you can strike it, but if you’re the default purple Wyrn and the blast is yellow, you’re better off dodging it altogether,. Should you be playing through the game with a friend though and they’re the yellow Wyrn, feel free to let them take a whack at it, and trust me, you’ll want them to hit them.

Due to kind of game Bleed is, across its 7 stages, in Story mode, there are more than 25 Boss Battles and good number of them are against bosses players of the first game have encountered, as a number of them are returning ones, only now they have been improved, their attack patterns have been altered and the purple and yellow projectiles offer a whole new fun element to deal with that only adds to the experience. What’s more, should you die, with Story mode allowing you to have infinite lives and checkpoints present throughout, no matter what difficulty you choose to play through (Easy, Normal, Hard and Very Hard,) death is not the end, but a small set-back that will never really set you back that fair, thus keeping the fun very much alive and when you do find yourself beating the game, it’s time to pat yourself on the back.

With Story mode being Bleed 2’s main mode, completing it on the various difficulties can see you earn new characters and weapons that makes each and every play though all the more interesting, whilst giving Bleed 2 a lot more replay value, then if it didn’t have them. Another unlock is mutators that when enabled, can allow you to have things like infinite life, infinite energy, play the game in zero gravity or just make the entire game even easier by making the game, the enemies and bosses, nonsensically hard. But if it’s a challenge you’re after and not just the one that comes from playing with a different character, you could always try your hand with Arcade mode. It’s almost exactly the same as Story mode, only with Arcade mode, you have just the one life to try and do everything in.

If one campaign of 7 levels isn’t enough though, there is an Endless mode that comes with randomly generated levels every time you play and a Challenge mode that carries over from the previous instalment that allows you to pick the three Bosses of your own choosing, for you to face off against, so without a doubt, if you’re looking for fun, or a nightmare with Bleed 2, then fun/a nightmare, is exactly what you will find and can share, thanks to supported Video Capture!

Bleed 2 isn’t Bleed all over again, it’s quite literally Bleed 2.0. So what if it doesn’t have that many levels to it? It still has content that is worth playing over and over, and plenty of unlocks that aren’t just another character (like The Rival) and weapon (rocket launcher), but a badge of merit that speaks of the trials you have overcome and warns of the ones you must face next and whether playing alone or playing with a friend, Bleed 2 is a game that is worth checking out on your Switch if you have the $19.99 to spend!