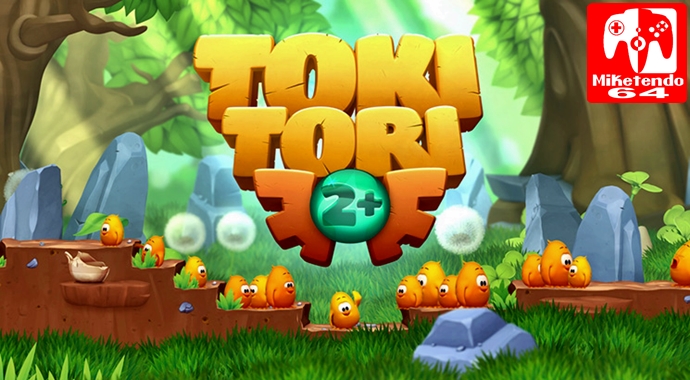 In 2016, beloved developer Two Tribes announced that RIVE would be their last game ever. Thankfully for gamers, they’ve stuck around just a little longer to give us a Switch port of the sequel to their very first game, Toki Tori – but Toki Tori 2+ is a very different beast compared to its fairly straightforward predecessor. Does this chick live up to its older brother, or has Two Tribes laid an egg?

In Toki Tori 2+, you play as disgusting cannibal Toki Tori (the ending of the first game has officially scarred me for life) who must set out to… er… save the world, or something? It’s not really important, since the game isn’t at all concerned with giving you any deep story, characters, or direction in general, really. Yes, Toki Tori 2+ is an open-world puzzle game quite unlike the level-based structure of its prequel, and perhaps the most notable change is how Toki Tori himself interacts with his new environment.

For starters, gone are the gadgets and gizmos he used to use to get around, replaced with two new abilities: stomp and whistle. The stomp is generally used to get things to fall or make critters move away from you, while the whistle can draw things closer. You can also string together whistles to compose various tunes that offer various effects – for example, one tune creates a checkpoint, while another lets you rewind time if you’ve made an error in judgement. You slowly learn these new songs as you progress through the game, but if you know which notes to sing you can technically unlock them at any time, and will likely do so by accident at some point.

These two tricks really are the only tools in your arsenal, which gives it a similar quality to games like The Witness – every puzzle you come across can be solved with your current skill set, as long as you know what to do. And to the developer’s credit, they do get a lot of milage out of these two moves by coming up with numerous clever and varied scenarios to solve. One moment you’re figuring out how to move a bubble-spitting frog into the right position, the next you’re attempting to tiptoe through a cave of killer bats ready to pounce at the slightest hint of noise.

Unfortunately, the biggest problem for me was the total lack of direction. I stopped feeling particularly compelled to progress after a certain point because I had no idea where exactly I was going or what I was working towards. And when you get stuck, oh boy – either buckle down or bust out the walkthrough, because you’re not getting any hint system here. The Toki Tori remake on WiiWare was no walk in the park either, but even that included the option to skip one level to come back to it later. This, on the other hand, is a game strictly for hardcore puzzle-platformer fans, the kind of tough-as-nails gamer who lives solely for the satisfaction of finally completing that one brutal puzzle.

In the audiovisual department, Toki Tori 2+ has gone for a slightly more atmospheric feel than the previous game. Though things like mysterious dirt platforms floating in midair still leave the environments strictly grounded in video game-y territory, the added graphical flourishes (the DKC Returns-esque silhouette sections are a particularly nice touch) and larger scale of the levels give everything a slightly lived-in feel and keep it from looking as noticeably grid-based as the original. The music goes for a similar feel, featuring light tunes laced with soft marimba, violin, and the sounds of the local wildlife. Not exactly hummable, but you’ll certainly enjoy it while you play.

Toki Tori 2+ is a clever puzzle game, but also one that is slightly esoteric and unwilling to make concessions if you’re stuck on a difficult section. If you’re in the market for the next great challenging puzzler then look no further, but even fans of the first game should know that this sequel isn’t necessarily for them.