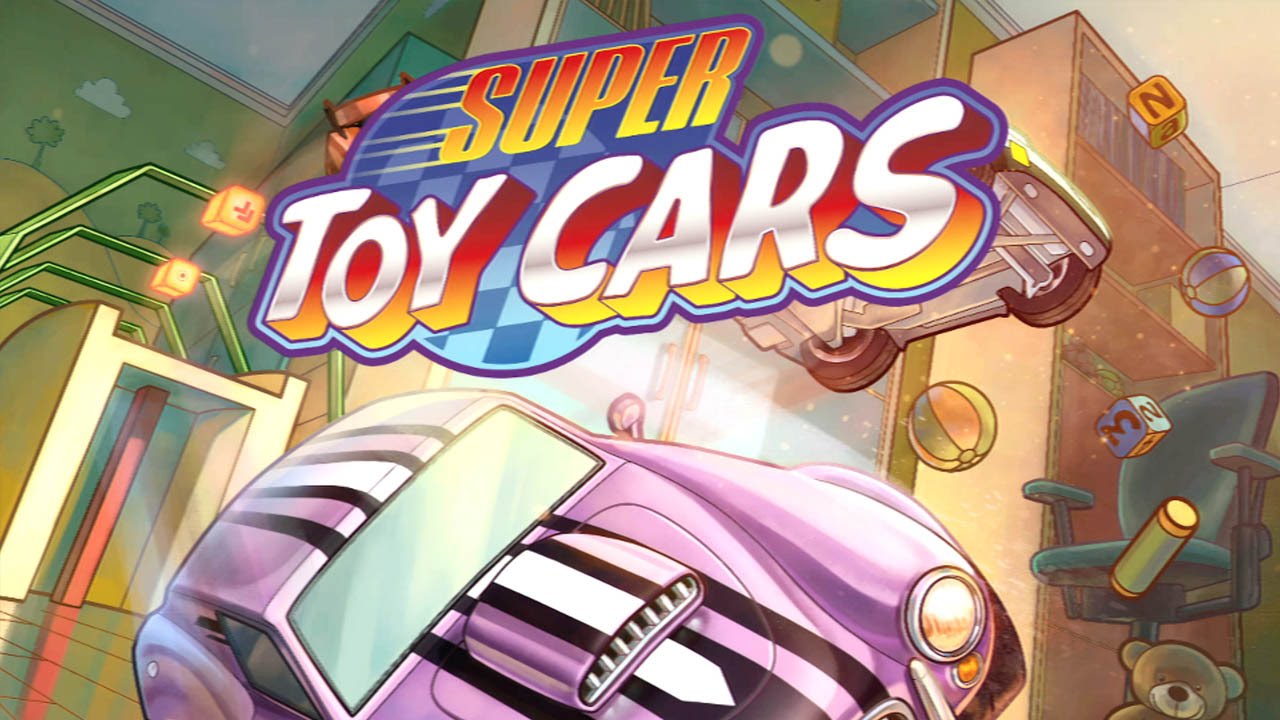 Who didn’t love the Micro machines videogames when they were younger? Driving toy cars around race tracks made out of everyday items on bedroom floors, on top of kitchen counters and pool tables. Though the Micro Machines videogames are now a thing of the past, it has inspired a number of indie games to carry the torch. One of which goes by the name of Super Toy Cars. Can it live up to the legacy? It’s time to find out!

Created by Eclipse Games, Super Toy Cars was first released on February 27th 2014. It was available on PC, Linux, Mac, PS4 and Wii U. It received very mixed reviews, mostly favourable on Steam but it didn’t exactly wow gamers on consoles. Super Toy Cars is now back and this time, it is on Nintendo Switch. Has it improved since its last outing? Is this the great comeback Eclipse Games is hoping it would be for their Matchbox racer? Well, I shall to try and answer these all in good time.

As Racing games go, there is not much of a story. In fact, there isn’t one at all. There are no characters to relate with or backstory. It is just a straightforward, no nonsense racer that happens to involve miniature, toy vehicles that compete against each other along courses made out of household objects whilst making use of items like rockets and Billiard Balls to take out the opposition.

Visually, I do find it appealing, especially the tracks. A lot of detail went into designing each piece of track like tin cans, potato chips packets, fizzy soda bottles, cereal boxes. The colour palettes look good on the toy cars themselves but some of them do look a bit blocky. Still, it is not enough to boycott the game completely as Super Toy Cars is presentable and easy on the eye. The sound effects are well done and match up smoothly with their animations, drifting is a good example. The in-game music provided by The Spin Wires is funky and fun, giving a nice energy to enjoy the game with its Pop Rock tracks.

There are two modes available to play, Career Mode, which is the single-player campaign and Quick Race, the multiplayer mode up to four players, where you can race on any track with any vehicle. Career Mode is made up of 48 races in 8 blocks of 6. You only have a few cars to choose from at the beginning but as you compete in races, you can earn coins that you can use to purchase better and faster cars.

Not all will be available as you progress. Some cars will be unlocked depending on how many points you win depending on your final position in each race. You can, however, change the colours of your vehicle to match your preference and upgrade it to make it faster or improve handling. It is only in Career mode can you purchase and modify vehicles; you already have all vehicles in multiplayer mode.

To make each race interesting, there are 5 types of race; standard, time trial, elimination, time attack and evade. Each one offers their own different parameters that you have to fulfil, like try not to get eliminated by staying out of last place. Getting to each checkpoint within a set time, etc.

There are three types of camera angles to use as well. Close view and Far view focuses the camera on the rear of your vehicle and Top view focuses on the car from above in true Micro machines fashion. Top view is a nice addition to have and is good fun when playing with others but it can hinder you somewhat in Career mode, if you are trying to compete and win all the races as it can be harder to judge the corners when drifting.

Whilst you can personalize your cars, you cannot personalize your name. You are stuck with the generic “Player 1, Player 2, etc.” All the CPU players on the other hand, do have names, which makes you wonder why you can’t add your own. In Multiplayer, you can’t personalize vehicles anyway except change their colour scheme but when you only want to have a mess about with friends, it isn’t really a problem.

Another point worth making is that you have multiple options of track to choose from. You can opt for a simple easy track with few curves to a much harder track with more twists and turns than a tangled rope. There are multiple track themes as well which are not very well distinguished, so it is a bit of a “Luck of the draw” kind of thing. You can also choose from the 5 types of race that I mentioned before; Race, Elimination, Time Attack, Time Trial and Evade, to add more spice to each race.

In Elimination and Race Mode, you will have access to items that are dotted around the track. Driving over these will arm your vehicle with a single use weapon that can slow down the opposition from behind or help you catch up with those in front. There are rockets that lock onto the immediate car in front of you, there are oil slicks, trap doors and mines to ambush cars behind you and slow them down. There is an item to instantly fill your boost bar and there is a Number 8 Pool Ball, which rams anything directly in front of it.

Controls can be a bit fiddly at times. Not so much the acceleration, drifting or braking but the handling in general. It is very easy to lose control when going around bends and then fine adjustments when trying to go straight ends up with a fishtail movement at times. The AI can give you a hard time as well. Though there isn’t much rubber banding going on, when you are clustered together, the AI somehow throws your controls out of whack and you end up going straight into a bend when everyone else makes it round no problem. However, you can get back on track easily just by pressing X. All vehicles differ from one another so you have get the feel of each individual car as opposed to race with one, you have raced with them all kind of thing.

I have had good fun with Super Toy Cars, I really have but after playing through the main campaign, there is little need to play it again, You can extend longevity by playing the quick race mode with your friends or on your own but I feel like I wouldn’t necessarily play it again, unless I had friends round. If you are hoping for an online mode, you are out of luck. There is an online leaderboard where your best times will be recorded and ranked with other players, to see who has the fastest time for each race. So if you are looking to play with others, you will have to invite them round and play like we used to in the good ‘ol days.

There is one gripe I do have which is kind of annoying. When playing in single player, after completing each race, if you are not connected to the internet, a prompt will tell you that you can not save your record online. That’s fair enough but when it happens after every single race you play, it can be quite annoying. This could be fixed with a small update I think, which could be added to the pause menu turning off the option to share race times online.

Super Toy Cars could be seen as a modest and cost-effective alternative to Mario Kart 8 Deluxe but to be fair, you really can’t compare the two. Fun can be had, especially with other players and it can be entertaining for a while but you won’t be sitting around for hours on end playing this game. A few rounds between playing other games will surely be its lot and at $9.99 you will still have a good time and a few laughs at each others expense.