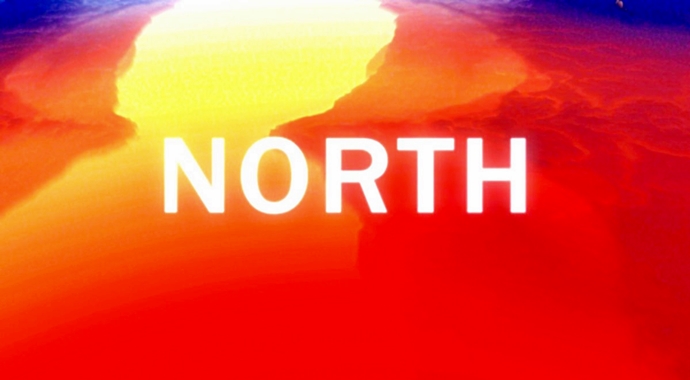 Sometimes when life gets hard, running is all you can do, for better for worse.

Having already brought 3 games to the Nintendo Switch this year, in the form of Energy Cycle, Energy Invasion and Energy Balance, developer and publisher Sometimes You are at it again, only this time, instead of bringing over a fourth game with Energy in the title, to the Nintendo Switch (as there isn’t one,) their newest release is one with a Blade Runner likeness.

Originally available for free, with a purchasable soundtrack and available on Steam for $1.99, developed by Outlands, NORTH is a short winded game that tells the tale of a troubled individual unable to put up with the hand he was dealt. He wants a better life for himself and with NORTH, the journey in which he must undertake, is yours to experience, in a sci-fi monstrous world that is inhabited by grotesque looking life-forms and the protagonist is one! But, to the players with a keen eye who can look beyond the upfront darkness, there is plenty of social commentary for you to read into, which only adds to the game’s overall tone and subtle message.

Now, despite being a rather clever game for the reason given above, as good a game NORTH could be, it is dragged down by its own doing due to how minimal the gameplay is. You can walk round with the Left analog stick, look around with the right one and interact with certain things when associated their text prompts, pop up on screen via the A button and pressing the right analog stick in. (One example of using the latter is when you’re standing in front of the game’s 5 camera’s, all so you can then go on to be “seen” and convert in the local church.)

There is a single instance in the game where you can run, which is when you’re in the mine, but you will need to have taken some pills that can be found in your room, on a table beside the room-mate of yours, who you believe is dying. It is a bit of a shame you can’t run anywhere else, as NORTH can have a lot of back and forth if you don’t know what you’re doing, or where you need to go, but for those who have played the game already, or just pay attention to the numerous letters your character will write and post to his sister that offer you an insight into the answer to every puzzle NORTH has to offer, NORTH is one of those games that won’t take you too long.

With no credits, no menus of any kind and no save states, NORTH is a tiny game you can easily best within 30-60 minutes, but it can be beaten in even less time as my second playthrough took me just 19 minutes. Still, just because it is short, it doesn’t mean it’s lack of duration is a bad thing, as there is nothing wrong with a small game, since they can be a bit of a commodity in this day an age where a lot of us have no time for anything, and be utterly brilliant, but it is something you ought to be aware off.

Something else to be aware of as well, is the fact there is a scene in NORTH, where you must take a trippy drug and conceive to a group of doctors of your sexuality and why your chosen orientation is an issue and another scene where you must take a test at the Police Station, which requires you to separate innocents from terrorists, while the game’s dark synthpop soundtrack plays throughout. Should you overcome those 2 trials and the others NORTH has to offer, then it’s time to head on over to the immigration office, hand in your paperwork and become the free man you’ve always wanted to be, just in time for the game to end and then start all over again, from the beginning. Only, whereas NORTH has a loop and is never ending, this review does have an ending and due to the game being an experience that offers the bare minimum, I have gone over everything I could, without spoiling the entire game.

Unless you want to be anal and list the lack on menus and additional content as a negative, NORTH on Switch, is a game of no real negatives as it’s the game its developers want it to be, but the pros for it, aren’t all that great either. It’s a game that covers real world issues in a fictional world, with a decent soundtrack of 8 songs, but the gameplay is just terrible. As a puzzle solving, first-person perspective, exploration focused title, there is so little to do that it hardly feels like you are playing a game in the first place and in the one place you can die, instead of the game forcing you to start all over again, you can resume from the area just before the mines, to try again. Sure, this is nice, but it was the one instance where NORTH could have been made challenging, as it would have given a roguelike purpose to it, but instead, you get infinite chances as NORTH prefers to serve as a game for you to complete in a single setting that can be as long or as short as you want it to be.  It’s not a sin it does that, but what could have been an interesting game, deserving of a place on anyone’s Switch, NORTH is a game that reflects its $2.99 price-tag and it would be foolish to expect anything but the bare minimum from it.