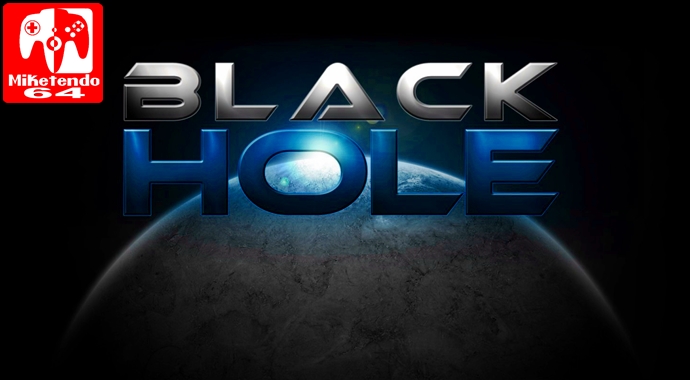 Black Hole is a twin-stick shooter that tasks you with destroying waves of enemy asteroids, robots, and more across 40 different levels. The game gives you three ships to choose from: Hunter (the all-rounder), Falchion (fast, but weak), and Eagle (physically powerful, but slow). After picking a ship you’ll be thrown straight into the game. Each stage is a black hole with different enemies coming at you from outside the borders of the hole, and defeating all of them will progress you to the next stage. After 10 stages you’ll face off against one of the game’s 4 bosses, and while none of them are particularly memorable (besides the unusually named second boss), they do a good job of breaking up the game’s usual rhythm of just blasting away at waves of enemies.

The enemies you defeat during stages will drop stardust crystals of various colors, indicating which power-up you’ll receive (such as light blue for a temporary shield or purple for increased speed and faster shots). The most important of these crystals are the yellow stardust crystals, which can be exchanged for ship upgrades at the store after each stage. You can also unlock Hypercharge for your ship, which will allow you to find orange stardust crystals during stages, and collecting enough of them gives you access to offensive and defensive Hypercharged Abilities. Defensive ones will deflect projectiles and suck in nearby stardust crystals, while offensive ones will unleash a devastating attack on your foes. To be completely honest, I never had to use either of these powers while on the game’s Normal difficulty, but in Hard mode I found myself using them more liberally once I unlocked them. Knowing when to use them can be the difference between victory and a one way trip to the bottom of the black hole.

One unfortunate flaw of Black Hole is just how boring the first 10 stages are. The enemy types are one note and boring, the music is uninteresting, and the background is the blandest out of the 4 in the game. I found myself sick of playing after 8 stages of the same boring enemies, but I’m glad I stuck it out past the first set of levels. The second area not only features the best song of the game’s techno soundtrack, but also introduces far more varied and unique enemies. I know the first stages are meant to get the player acclimated to the game, but they could have done with being a lot more fun to play. To put it simply, the first area of the game feels like one big, bland appetizer when all you want is the main course.

While perhaps not as important as other aspects of the game, the dev team at Dufgames should be commended for attempting to make Black Hole as accessible as possible for any type of gamer. The game has a colorblind mode, a speedrun mode, and has support for all control types imaginable. This even includes Motion and IR Camera controls, but the results are just as wonky as you would imagine. I couldn’t figure out the motion controls for the life of me and the IR Camera controls (labeled as “experimental” in the game) are easily the jankiest control scheme ever included in a twin-stick shooter. Still, it’s pretty neat to see how accurately the IR camera built into the right Joy-Con picks up your hand motions (even if the game doesn’t know to how it should interpret those motions).

Black Hole is a short game, with a single player campaign you could easily complete in under 2 hours, though the option to beat the game again on a higher difficulty level and/or with a different ship could help add some longevity to the game. There’s also an achievement system for those who want to go through the game again and complete specific goals. Still, there’s no getting around the fact that Black Hole just doesn’t have much to offer players after their initial playthrough.

Black Hole is a competent twin-stick shooter with a funky techno soundtrack and a trippy aesthetic. The game’s a bit on the short side and has a slow start, but at only $6 it provides a fun romp for an afternoon. If you’re into achievement hunting or speedrunning, Black Hole might provide some amount of replayability, but for everyone else keep in mind this is a game you’ll probably only want to play through once.