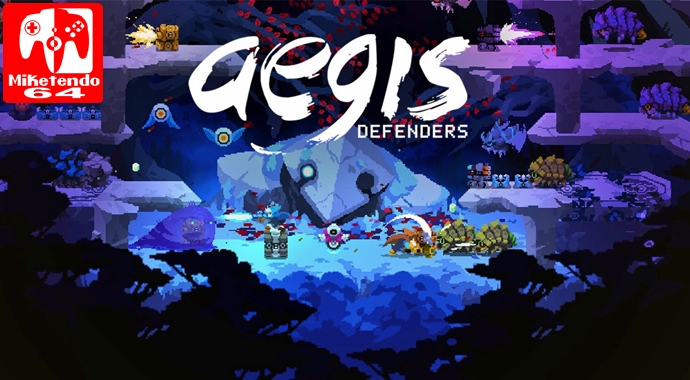 I love tower defense games. I love platforming games. This game decided to put two and two together and wow, you wonder why nobody decided to combine these two till today. These two genres are so different. They’re almost opposites, but opposites attract.

Out now on Switch and successfully kickstarted in 2014, Aegis Defenders is a platformer meets tower defense game, published by Humble Bundle that tells the story of 2 Heroes, who upon discovering a robot, must help him find the Aegis (no, not Pyra & Mythra as this isn’t Xenoblade Chronicles 2,) the all-powerful weapon to do battle against an invading empire that has already taken control over neighbouring nations. Only the robot is not the only companion the heroes will meet during their journey, as there are many other adventurers out there who are just ready and willing to make theirs and your acquaintance.

Moving onto the very thing that makes Aegis Defenders what it is, let’s talk about the combination of platforming and tower defense and how well balanced they are. It’s a genius idea and truly well done. You can’t tell one genre is dominating and getting in the way of the other. They each have their moments and their inclusion is logical and not forced. I really loved having these two as you get to explore a little bit, see the environment before defending. As for gameplay, levels start out with exploration of the area (aka platforming) where you must explore and collect collectables (special relics that at the end of the level, permit you to buy helpful upgrades, so they’re definitely worth tracking down.) You then proceed to a bigger location, where’s there something you must defend. Hordes of monsters come from all sides and advance to the thing (object or lifeform) you’re defending. If they manage to hit it three times, you’ll need to restart the tower defense section. If you do prevail, you’ve finished the level, so I recommend winning!

With regards to the platforming sections, during these segments, you must head over to your predetermined destination and find what it is you’re searching for. The environments come packed with pretty graphics and a huge spoonful of beautiful visuals. These sections require you to switch between your two main characters and it’s done perfectly. Although seemingly short-lived, these segments are a lot of fun, which is only ever cut short, when you are done exploring and reach your destination.

In my time as a gamer, I have played a lot of tower defense games, so when I say that Aegis Defenders is one of the best tower defense games ever, you can take that to the bank. The tower defense is so good here. Never before has a game given me the feeling that Aegis Defenders has, as there really is nothing quite like it. Every time you win, you feel satisfied because of the rush this game has given you, as you create your own luck. Each stage forces you to change strategy and you must adapt. You build different defenses and weapons to defeat the coming enemies. The thing is enemies come from everywhere. It is super stressing as they come from many different places. To make it worse you have different elements so certain elements work better vs certain enemies. You have to strategize which characters make certain defenses. In between enemy waves, you must get resources to build defenses. There’s a side I love about this game and that’s how active you are. You aren’t just building defenses and sitting around. You’re actively fighting the enemies and since you only have a minute in between rounds you’re rushing to get resources. I actively stressed during these sections and got a rush of adrenaline. It’s an amazing feeling of winning. Oh, and the maps are pretty big so you’re running all around with enemies from all sides.

The tower defense is really deep here and it’s what really amazed me, but what really makes Aegis Defenders reach new heights is the platforming. That’s where it really shines. Talking Fault-wise, the only noticeable flaw is the game’s difficulty as I really struggled with Aegis Defenders, although it was a shame that there weren’t more levels, the art. It is pixelized, yet detailed as the developers really played with the nuances of the colors. Plus, the cameo appearances like Shovel Knight, are pretty sweet. (Yup, the knight with a shovel has popped up in another game and he’s not the only one.)

Aegis Defenders is an amazing game. The mix between platforming and tower defense is so awesome. Each of these sections are amazing and are greatly enjoyable in their own right. The tower defense element, is a highlight and Aegis Defenders offers some of the best of this genre, I’ve ever seen. The developers completely understand both genres and excelled in fusing the two together. Sure, it’s difficult, but it is one of the best games available in the eShop, so I can’t help but recommend it!