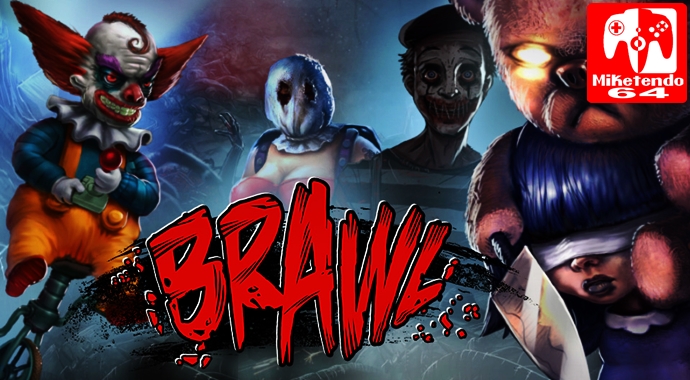 I thought this would get better… It didn’t.

There’s a soap-opera TV show in the UK called Hollyoaks, and it’s considered to be absolutely terrible. But, because it’s so bad, it has an audience regardless. One time, they decided to spin it off into an hour show, with more characters and ‘edge’. After the first episode had aired, this was decided to be even worse than the regular version. This is what sums my thoughts up on Bomberman, and then Brawl respectively. Surprisingly, Brawl is, in fact, a remake from the ground up of Bloober Team’s ‘Basement Crawl’ from 2014, of where it was so heavily criticised, they promised to remake the game, of which the result is now here. The style is a dark, Goosebumps-like horror way, which, alongside the characters and their abilities, reminded me of the Twisted Metal series.

There is a story mode where ‘The Avatar’ has you play as these different characters, but the story is merely a way of letting you play as all the characters, to have you prepared for multiplayer, which is the game’s main bread and butter. Brawl tries to adapt to the mechanics of an over-the-top view, where you control a number of characters where they have multiple abilities, but there don’t seem needed. From the bear that throws knives to a thief that can turn invisible. The fun in these games are in the strategy of placing the bombs at the right moment and the right place, but here it seems more like a trial-and-error playthrough.

I can’t continue if I couldn’t mention the HUD, of which, when I was playing it on my daily train commute, was terrible to spot if I was low on health or if I had a special power-up available. Usually, I had to stop what I was doing and spend a few seconds to spot what I had, which, in this kind of game, is a lifetime. The controls are best played with a D-PAD, as I was finding myself going down the wrong row and then being killed by a robot when I was using the analogue stick.

Unfortunately, the frame rate is also a factor in this. There’s a level in Story Mode where you’re facing the main enemy, and four of its henchmen. The frame rate slows down considerably, and you end up being lost as to how much health you have, and if you’re facing the right direction to leave when you’ve planted that well-timed bomb. You can easily die in two or three chances, and oddly, you find yourself losing by close-attacks more than the bombs.

I did attempt multiplayer, a few times in a mode where it was a ’Survival’ mode, of which was so frustrating I stopped after one evening, mainly because it wasn’t enough time to see what your surroundings were, and what the enemies actually had in weapons. Another few days were spent with the partner, as she had a Joy-Con and I used a third party controller. She had to get closer to the TV as she wasn’t sure what her HUD had said, and the more times I won, the more we then switched to Sonic Mania.

Overall, this is best to play on a quick commute. It’s not awful, but it could have been better. This would have been best to have a brighter art-style, alongside a HUD that you could actually see in both handheld and TV mode. That alone makes the game frustrating to play, even before the enemies and the frame rate starts to affect. I doubt that there will be updates to the game, as it already had an update in the vein of the remake. This is version 2.0 of Basement Crawl when all is said and done, and it’s ended up as a much cheaper Bomberman, and frustrating in the worst of ways, unfortunately.

If you need a game to play between pay day when you can buy a game like Bayonetta, buy this, see what I mean when you try to play ‘Story Mode’, and delete it once pay day arrives.