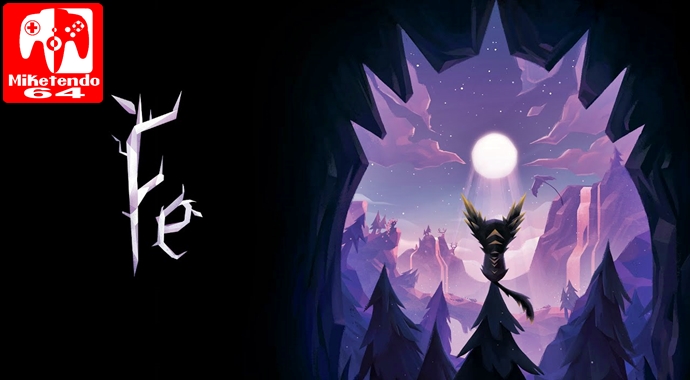 Looking for a platformer that will positively enchant you? Then look no further, for the Fe-nomenal Fe is here.

First revealed during E3 2016 as part of EA’ EA Play event, Zoink Game’s fantastical Fe was revealed as the first of EA Originals, a new extension of EA’s publishing arm, focused on helping indies both financially and physically, to create games the indie devs are fully in control over and can share with a much wider audience thanks to the EA brand that’s known the world over. Now, by no means is Fe the only game part of the EA Originals label, as there are others, but unlike the others, it is the only one at this time to get the chance to grace the Nintendo Switch with its presence and in a lot of ways, it is too good to be true!

As an action-adventure platformer, Fe has been described by Zoink Games’ Klaus Lyngeled, Fe is a “personal narrative about our relationship with nature” and that fact could never be any more factual. Set in something of a mystical Nordic inspired forest, home to many different animals, such as a giant stag-like beasts, with climbable trees on its back legs, Fe is the story of Fe, a fox-like creature that takes it upon itself to defend its home when hostile entities known only as the Silent Ones, start upsetting the balance, but Fe is not alone.

With the forest being home to more than just Fe ad those of the same species as there are others, there are animals and even plants that are willing to help Fe fight back, but in order to get their assistance, you will need to do so, via the medium of song. With 5 learnable songs and the one Fe starts off with, during the events of Fe, the playable Fe will have to learn the various songs over course of the game, in order to enlist some assistance, because whilst the younger animals are willing to help out, the adult ones will only help those who speak the same language. Still, even when you know the language you need to sing (change songs via holding L,) holding ZR to sing at them isn’t even, because you’ll also need to make sure your pitch is in harmony to theirs, which can be adjusted via motion controls (tilt/turn the remote/Joy-Con,) or by moving the right analog stick.

I realise singing might not seem all that impressive compared to hacking away at the Silent Ones with a sword, but Fe is not about that, it is about connecting with animals and when you encounter the first animal you can get to bond with, you will say wow, because the moment and the associated feeling are incredible, much like Fe’s overall graphics. The world of Fe truly is a sight to behold, as it is a work of art and the colours, there’s more than just purple and Fe looks so mystical and so enchanted that it is hands-d0wn one of the best ever designed games, as it makes a Picasso look like something a 5 year old drew on a crude bit of paper, which their parents then had to stick on the fridge. But Fe’s exquisite presentation doesn’t just end there as even the ethereal soundtracks is compelling enough to get under your skin and make you feel the very essence of what each area of Fe is meant to convey, whilst never being too loud that it drowns out the action as seen whether you’re playing docked or undocked.

The thing with Fe though that you really need to know, is the fact that Fe is nothing quite like you’ve played before. Yes, there are some games it shares a few similarities with, but Fe was created in such a way, it actually reeks of an original title in a day and age where games draw from one another quite a lot and although it is a platformer that wants you to do well, to get to where you need to go and do what needs to be done, but Fe wants you to fall.

Fe wants you to stumble and lose your bearings because Fe isn’t just a platformer, it’s a game all about exploration in a surreal environment and doing what is needed to take care of the intruders. So, if you’re not afraid, or going in the wrong direction, even after you’ve brought the map up with R and started to move in the right direction, you’re not playing Fe right. Although if you do want a guide to help you out from time to time that isn’t a map, singing any cry at the top of Fe’s voice will attack a bird, which when sung to again, will show you where to go next. (Talk about helpful!)

Fe is not just a game, it is an experience, yes there are collectables, such as crystal-like objects that when you get enough of, will grant you with a new ability like climbing trees, gliding and even running on all fours, but Fe is an intellectual property designed to captivate your attention and feel things from a game you haven’t felt in a long time. There is a story to the wave of emotions that will constantly be sent your way, but as a game that prides itself with next to no instructions as the gloves are off and no hand-holding is present in Fe, there is a grand story being told via the 152 murals that can be found all over the forest and brought to life by signing at them, but it’s down to you to find them. Awakening each and every one isn’t really necessary, but they’re there if you wish to seek them out, as little secrets lurking here and there that you will only every truly track down, if you’re willing to explore every nook and cranny.

Should you choose to get by on the bare minimum, as you can reach the trippy, yet revealing end, if you have the tree climbing and gliding abilities, Fe can easily be beaten within 4-6 hours, with another 4-6 just to go round and collect everything you missed during your first playthrough, which is in your best interests. Should you beat Fe, the world you once knew is a little different in the post-game as things are better and brighter and you are truly free to go wherever you please. So, if heading off to the snowy part of the map appeals to you instead of going to the swamp, all because the map says you’re missing a mural and a memento like object that prompt playable cut-scenes, then that’s what you do, until you decide to go elsewhere. Even then though, it’s not necessary because you can play Fe without collecting anything and still have a good time as there is bound to be a lot you’ll miss out on the first time around, due to being in a rush to head to each way point and do what’s required of you before moving to the next area, so should you wish to play for the sake of playing, Fe is still a mesmerising experience.

However, although there are many positives to Fe, it is not the perfect games as there are some issues. Having played and reviewed the Switch version, there are instances of regular stuttering and framerate drops when going from one regional area to the other and even during the occasional fall, but there was one instance where the autosave function didn’t work like it should and I had to repeat around 4 hours of what I had already done previously. I absolutely hated having lost my progress, but due to how beautiful Fe is and how much I was enjoying it, I was happy enough to go through a lot of it again, but this was something that happened and we have made sure to let Zoink know in the hopes this instance never affects anyone else again. But other than those two things and it being a bit confusing at times, they’re the only real things Fe does wrong and it’s simply incredible for Zoink Games have created the next gaming wonder of the world!

There are issues and Fe might be a little too hard for some due to the lack of hand-holding, but it, like Celeste, is one of the best indie titles you can play this year, as Fe is incredible and just because EA was on hand to offer support, Fe is all Zoink Games’ doing and they have truly surpassed themselves once more, much like Image & Form Games with SteamWorld Dig 2. So, Fe, it isn’t just another game you should pick up for whatever console you wish to get it for, but it’s the next game you should pick up, because even at $19.99, Fe is under-priced!