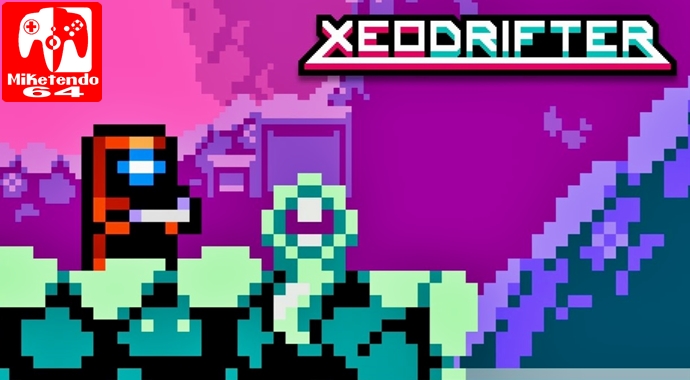 Metroidvania games have become commonplace on Nintendo Switch, and Atooi has eagerly jumped into the trend with Xeodrifter, which originally released on the Nintendo 3DS in 2014. Xeodrifter functions like a light version of Metroid and adheres very strictly to the formula of exploring mazes and using upgrades to reach new places. Although Xeodrifter doesn’t do anything particularly exciting for the genre, it’s a solid, short romp with a gorgeous faux-NES graphical style and wonderful chiptunes.

You play as an astronaut whose ship has collided with an asteroid, leaving you stranded in space. Your barely functional ship only has enough energy to travel to four nearby planets, each housing a different self-contained mazelike area. This structure may disappoint fans used to the unified map in most Metroid games, but at least the levels are solidly designed, albeit overly streamlined.

Every platform is aptly placed, which lends itself to optimal run and gun gameplay. And the laid-out paths are designed to cleanly guide you from point A to B. But due to the overly simplistic and fairly small levels, I didn’t get that important sense of excitement from exploration. The multiplanet format doesn’t live up to its potential either. Although you can freely hop from one planet to another, the game technically follows a linear structure and you’re meant to go through each level in a certain order. It’s pretty clear that you aren’t on the right path if you’re blocked by an obstacle and don’t have the corresponding upgrade to get past.

On the plus side, by veering off the beaten path, you receive nice bonuses. In particular, the gun upgrades are implemented well. Your starting character is only equipped with a weak blaster, similar to what Mega Man uses. By grabbing upgrades, you can choose how you wish to improve your gun. For instance, you can equip it with homing bullets, wavy shots, or stronger firepower. Or with enough upgrades, you could use a combination of any of five gun types. It’s a versatile system that tailors progression to the player and rewards adaptation. For example, I preferred using the strongest shot, but switched over to a wavy gun to destroy an annoying enemy without getting hurt. I enjoyed blasting tougher enemies with the most ideal shots.

Just as impressive are the power-ups, which are a blast to use. There are standard powers that help you travel in water or run rapidly, but my favorite was the ability to phase-shift between the background and foreground, a move clearly inspired by Atooi’s Mutant Mudds series. The only thing missing is the 3D effect from the 3DS version! I owe part of my enjoyment to how responsive it is to control the astronaut. Movement was smooth, and death rarely felt cheap. I was empowered to perform any action, even some in succession, like running and phase shifting at the same time.

However, to earn these fun power-ups, you must fight the same squid alien boss not twice, not thrice, but seven times. Sure, it gets stronger with every encounter, but it’s still the same exact creature every time. The redundancy is an overall problem with the rest of the game as well. You end up backtracking through these areas often, whether you hit a roadblock or get sent back to the beginning upon death. It’s an unnecessary amount of repetition for such a short game. Speaking of which, a first-time playthrough will likely take just a couple of hours, and 100% completion can be achieved within three or four hours. Its length makes for good replays, though it’s not necessarily enticing to experience it again. On a related note, if you’ve played it on another system, the Switch version doesn’t add anything new to warrant a second purchase.

It’s hard to feel one way or the other towards Xeodrifter. I certainly enjoyed it, but I wouldn’t consider it a must-play. It’s a solid Metroid clone, though it feels stripped of what makes the series great. The multiplanet structure is interesting, but its individual levels and their designs are too small and basic to stand out. The power-ups are fun to use, but they reveal a rigid linearity that cheapens exploration. And unnecessary repetition plagues the already short experience. I don’t mind quick games, but Xeodrifter comes and goes without making a huge impression. Regardless, if you are a hardcore Metroidvania fan and want something akin to a Metroid-lite, Xeodrifter is a good bet.