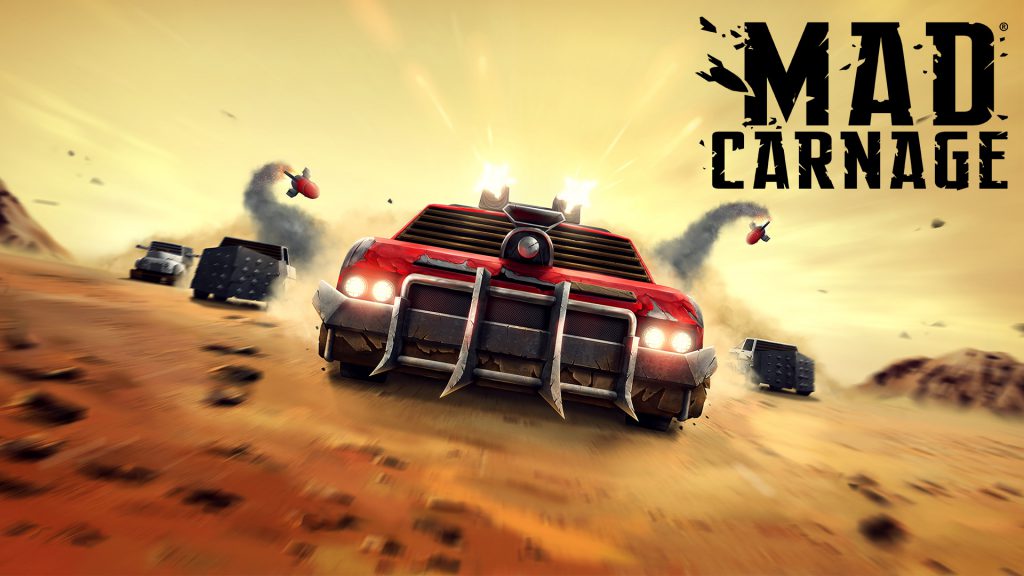 If there’s one genre with a bright future on the Switch, it’s the strategy RPG. The genre has seen much success on handhelds in the past, and its emphasis on deep thinking between each move mixes well with the pick-up and play nature of the Switch. The ability to lead your army a few moves while you have a bit of free time while on the bus or at the office means the usually intense mental load of harder SRPGs can be consumed in smaller spurts. As no king of the SRPG has yet taken the throne on Switch, Mad Carnage hopes to woo players with its high octane vehicle-based take on the genre. Does it succeed?

Mad Carnage asks you to lead a group of cars across a post-apocalyptic desert while defeating other cars along the way. The first thing that must be addressed the narrative. When you start the campaign it gives you a few screens of text to go through to tell you the story. However, on those screens (before the game switches to the comic panels it uses to tell the story from then on) the game gives you no indication that you need to scroll down further to read more text. No arrows, no pop-ups, nothing. I completely missed the fact that there were several more paragraphs of story to read through until I had played 3 or more levels… not that the story is anything to write home about. The game touts that it’s created in collaboration with Evan Currie – “a bestselling sci-fi novelist!”, which I suspect may be just a bit of an exaggeration. The two walls of text that accompany the beginning of the game consist mostly of the main character driving away from danger in the most thorough description of driving you can imagine. The dialogue finds it necessary to describe every single time he shifts gears. Every. Single. Time. Truly fascinating stuff. The comic panels between each of the game’s missions aren’t much better, usually consisting of a single page that barely tells you anything besides the goal of your mission for that stage.

There’s a usual method for moving across the map in a tile-based strategy RPG. During your turn, you select one of your units, then select one of the highlighted tiles in front of your unit. Upon choosing said highlighted tile, your unit moves to it. Simple enough, right? Well, Mad Carnage follows this tradition, but somehow manages to ruin it at the same time. The game has a unique movement mechanic where moving multiple tiles forward will boost your speed. The faster you’re going, the more tiles you can move forward. However, moving faster also means it’s difficult to make turns. Therefore, if you’re moving too fast you’ll want to move fewer tiles during your next turn so you can better change directions. This mechanic might have made for some interesting gameplay had the game bothered to explain any of it to you. The intro level briefly explains that you can speed up and slow down, but never about how it affects your ability to maneuver. This means you’re completely left in the dark as to how to move your units to where you want them to go while facing the direction you want them to face.

This grows extremely problematic due to the nature of the game’s combat system.  When attacking you’re given a cone of light that extends from the front of your unit. If an enemy is within your sight then you can attack them. However, if you’re close to an enemy unit but not facing them, you won’t be able to do a thing. Knowing how to properly flank your opponent and face them is key, but the game’s wonky movement system makes intelligently leading your units into combat nearly impossible. This is especially bad once the Rammer unit becomes available, which attacks by running into enemy units. Countless times I would mean to bash into an enemy unit only to miss them completely due to the strange movement system and be left a sitting duck for enemy fire. It can’t be stressed enough just how much the basic movement of your units ruins the game.

Much of Mad Carnage’s battles will come down to whose unit sees whose first, as many units only have enough health to survive a single attack. There are also missiles attached to some of your units that fire in a straight line for a few tiles each turn when used. Because the game has 16 different angles your unit can be turned at you’ll mostly want to fire your missiles when your unit is completely straight, as calculating how your missiles will move across the isometric map at a diagonal is nearly impossible. Too bad no one told the enemy units, who will easily fire crazy diagonal missile shots at you with relative ease. The enemy will always have a better understanding of how the game works, leading to even the simplest looking battles becoming an absolute slog to get through. Oh, and did I mention the game only lets you use the left analog stick, not the d-pad to move your cursor across the isometric map? Even just selecting your units is a chore in Mad Carnage.

I could go on and on about the issues with Mad Carnage’s gameplay. The game has a cover system that’s never explained, meaning you’ll never know how to hide from enemy fire. Also, the game forces you to move your units every turn. There is no skipping a turn or choosing only to move a few units. Every unit must be moved every turn. This will force the player into moving into enemy fire when they chose to speed up instead of slow down a turn or two earlier. There’s little forgiveness for small mistakes in unit movement.

Visually, the game is extremely poor. Each map is comprised of the same barren desert landscape, and the cutscene art is nothing to write home about either. The music is equally bad, filled with boring and quickly looping tunes that will leave your memory as soon as you turn the game off. The game also includes a two player local multiplayer mode with 8 maps to choose from, but if the game won’t properly explain its mechanics to the player, how can anyone be expected to explain the game to someone else?

Mad Carnage is a 10 car pile-up with none of the spectacle. It’s visually boring, audibly irritating, and boasts some of the worst strategy RPG action I have ever had the displeasure of enduring. Even the $5 price point isn’t enough to save this disaster of a game. Do yourself a favor and avoid this hazard of a game at all costs.