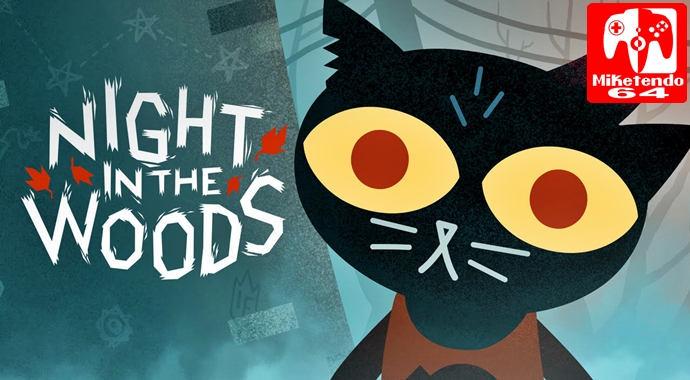 Have you ever spent a night in the woods? Made a campfire and toasted some delicious hot s’mores? No, me neither. If Finji and Infinite Fall’s Night in the Woods is anything to go on, I don’t really want to spend a night among those creepy trees.

Night in the Woods is a side-scrolling adventure game that puts you in the shoes of Mae Borowski, a college dropout suffering from some kind of mental health disorder. You’ll spend the game reacquainting Mae with her former, aimless life back home at Possum Springs, a quiet little town that’s struggled to move on after the collapse of the mining industry. Mae’s former friends have grown up whilst she’s been gone, the shops are different and nothing is quite the same as it was. It will take a little while for her to get used to all these changes, but home is home, that is, until Mae discovers some strange goings on.

The game opens with Mae escaping from what appears to be a hospital, in an attempt to get home. A mysterious janitor, who opens a door for her after being given a can of fizzy in one of the games many amusing moments, eventually helps Mae leave the building. Mae then runs home, jumping over obstacles with her patent-pending triple jump and almost dying at the hands of falling logs. Indeed, Night in the Woods is placed somewhere between traditional adventure gameplay and platformer, although it shares far more in common with the tropes and gameplay hooks of adventure. Mae gets home safely, but you learn that she is a day earlier than her parents expected, parents full of dry sarcasm and wit in their responses to your dialogue that you occasionally choose.

The game carries a dry sarcasm and wit throughout, but it is twinge with sadness and a foreboding existential angst. Mae doesn’t know what she wants to do with her life and is faced with questions on the subject from all angles, including from the countless people who are unhappy with the state of the world and work. You’ll spend your time running through the streets of Possum Springs, speaking to just about everyone and watching as the world around you slowly opens up, letting you in on its secrets, no matter how weird. It’s up to you who you speak to, it’s largely up to you what Mae says. Choice is an important aspect of Night in the Woods, no matter how menial it may be at times.

You’ll choose who to go on adventures with, you’ll choose whether to try and open up, or to stay shtum, you’ll even choose whether or not to feed darling rat babies you can find in among the rooftops of Possum Springs – accessible via power lines, if you wish. Naturally, I chose to do and see as much as I could in my time at Possum Springs. I spoke to everyone I could find every single day. Indeed, Night in the Woods sees you wake up and go to bed every day, with different people to speak to every day. The more you interact, the more you learn about individual, well-written lives and the world around them. The game acts as an interesting character study for many types of individuals. Those who are happy with their lot, the elderly, and 20-somethings who are stuck in a dead-end minimum wage job with ideas of grandeur.

Night in the Wood does suffer from repetition, as you’ll spend a lot of the game running to the same spots each day, talking to the same people and then going to bed. Yes, the game slowly unravels its world and characters each passing day, but it does get a touch tiresome. This is made worse by the constant loading screens. Possum Springs is a living and breathing world, full of charm, character and lovely effects such as wildlife running from you as you get too close, but it isn’t one area. The game’s world is small, but split up into many, many smaller areas, each one coming with its own loading screen. Go into a room: loading screen. Go out of the room: loading screen. While each load screen isn’t long at all, the sheer number of them does become irritating rather quickly.

So too does the sluggish framerate. Night in the Woods looks stunning and there is a fair amount of detail crammed in there, but you get the impression that it isn’t really pushing the Switch hardware – there are games that are more complicated which run better. I hope that they can patch the game at some point in order to iron out the almost constant small dips in framerate, but it is never game breaking, nor a grand issue, just disappointing. These, though, are the only issues I had with Night in the Woods.

The game tells a very good story and covers themes of depression, mental health issues and religion smarter than just about anything else I have played, read or watched. The intricacies of each character, even those who are not close to Mae, are interesting enough that you’ll want to learn anything you can about everyone. I’ll remember the conversations I had with Selmers, Aunt Mall Cop and the football fans who stand outside the town bar each and every day. While some of the dialogue is a little too edgy for its own good at times, it’s easy to get hooked into the finer details of everyone’s lives, even though they are all animals. Night in the Woods is a smart game.

This is all backed up by a tremendous soundtrack that flows effortlessly along with the themes the game is covering at any given time and an art-style that oozes personality and is always worthy of a screenshot. Whether you’re looking at constellations, sitting on a bridge or are simply in the Snack Falcon with Gregg, you’ll love looking at, and listening to what the game offers you. If you ever get bored of running around Possum Springs, the game occasionally takes you to new places such as parties in the woods, underground sewer systems and to a spooky old graveyard. Dream-sequences, too are there to break up the repetition, although these strange worlds become repetitive of their own accord. If this isn’t enough, you can play the bass in a decent rhythm action game or even play Demontower on Mae’s no longer porn-infested laptop – a solid enough game in its own right. Night in the Woods is awesome when it wants to be.

Night in the Woods tells a fantastic, but sad story about a girl with issues of one sort or another, re-discovering her life after dropping out of college because of personal, emotional struggles. You’ll love finding out about everyone in Possum Springs, you’ll love the interactions, the art-style and the music, but you won’t love the repetition (despite it serving a purpose), nor will you love the constant load screens and dodgy framerate. Whether you’re playing docked or undocked, however, you will be sure of enjoying Night in the Woods after all is said and done.