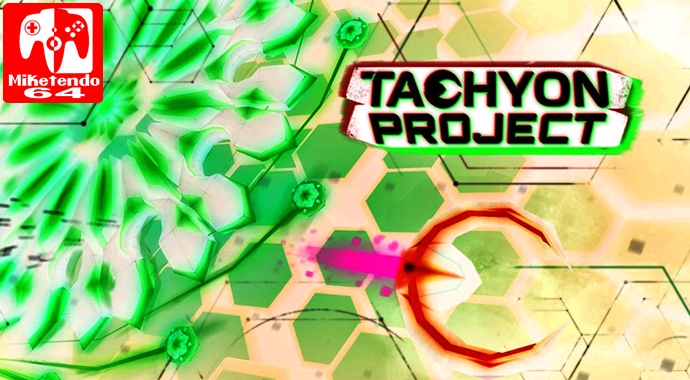 Shooting your way to Victory!

When it comes to shoot ‘em ups, a genre so rich with classic games such as Space Invaders, Asteroids and 1662’s Spacewar!, it’s easy to understand why gamers and developers love them so much. It’s a simple premise that has worked wonders for decades, but will it do the same for Tachyon Project? A game its own developers have stated as being heavily inspired by the classics? Let’s find out!

Tachyon Project is a twin-stick shoot ’em up developed by Eclipse Games, initially released on Xbox One in 2015 and eventually arrived on PC and PlayStation 4. Only come the 25th of January, 2018, Tachyon Project is now out on the Nintendo Switch and upon listening to feedback from all those who played it, the Switch version is said to be the definitive version!

Visually, Tachyon Project is a game that takes the idea that everything is happening on Servers and computers and joins with neon colors to create the design and colors of the arena, the player’s “ship” Ada and all the enemies. It gives a beautiful visual presentation to the screen and together with the format, makes it easy to identify each enemy, which is good, considering the game has 30 types of them. To contrast against the variety of enemies, the game has just 1 arena, so things can get a little repetitive, even with the stealth mode variation,  and it can feel a bit small at times.

While the 3D models are well planned, the same can’t be said about the HUD, especially considering the portability of the console. The HUD’s design is okay and nails some parts very well with the idea of a computer normally seen in a sci-fi series while others end up being not that good. But the real problem is that, in a few areas, the text included is very small, so it gets difficult to read on the Nintendo Switch’s 6.2-inch screen when playing in portable mode, but it is also difficult when in dock mode. But that’s nothing that a patch can’t correct.

Upon initiating the game, it presents you with 3 game modes: Story Mode, Challenge and Story Mode+. The first 2 modes are unlocked from the start, with the Story Mode+ being unlocked, once you have completed Story Mode, which won’t take too long, as it consists of 10 levels with 6 waves each. Each wave has a specific objective that ranges from destroying an X quantity of a specific enemy to surviving a Y quantity of seconds. Throughout the waves, you will be introduced to new enemies, but the introduction is done in a rather clumsy way.

The first problem is that the description of the new enemy is done while the wave is starting, so they expect you to play and read, which gets complicated to do sometimes. That wouldn’t be a big problem if that wave worked as a form to learn about that enemies and, although a few waves do that, many throw a bigger quantity of other enemies, taking the focus from that new enemy.

Another problem with the Story mode is that the balancing is very irregular. One of the easiest levels I did, was one of the final ones in the game, while others were almost impossible if I wasn’t using the right weapon and secondary weapons. This irregular balancing makes the Story mode frustrating on some occasions.

Finally, the main mode, tries to present a story that is told through 6 cut-scenes and the text boxes that appear at the beginning of each level, is a bit of an eyesore as the actual text feels far too small to even read eligible. But when you can read it though, things get a little worse because for me, the story is basic and forgettable due to the slow story progressing and a twist that was so expected that I actually guessed it before the penny finally dropped. However, I do have to praise the developer’s efforts to give the game some context, but many of the story details and design choices, did not help to solidify the story at all.

With regards to Story Mode+, it is exactly like the Story Mode, but now the enemies deal twice the amount of damage they did before, which can be a good challenge for your skills, if you can ignore the balance problems.

Should you require something more of a challenge than just stronger enemies, there is a Challenge Mode and it comes with 10 challenges that provide different experiences that range from the classic endless mode to one that you can only use the secondary weapons or a specific set of equipment. My favorite was the claustrophobia mode where you have to kill enemies to reduce the range of the bomb. Hands-down, Challenge Mode is the best of the 3 modes available, is the culmination of all the experiences Tachyon Project has to offer and is without a doubt the mode you will always come back to play.

There are a few problems that happen in all the modes that also lead to frustration, due to various issues that can be easily fixed with a patch to increase the overall quality of the game. The first major issue is that it’s not uncommon for an enemy to spawn very near or on the player’s position, causing you to take damage without knowing what hit you. Another one is that sometimes the game spawns a big quantity of enemies that will move toward you very fast and you will almost always end up taking damage. Then, of course, there’s the tutorial that doesn’t do a very good job of explaining the HUD, so it took me a while to understand it. Aside from these problems and the others Tachyon Project has, the general gameplay can be fun at times, when played in either short or long playthroughs.

In general, though, the controls are simple to use and fit perfectly this game, with variety coming in the form of customizing your main weapons, secondary weapons and special skills that you can add to your “ship.” And should you be curious as to how to get new customisations, they can be unlocked via earning points in Story mode, and beating levels. Just in case it isn’t obvious, customizing is a good way to change how you play and allow you to play it the manner you wish.

Finally, the game allows you to play it in co-op with up to 3 other people. This is a fun experience and definitely helped me finish some levels, but it isn’t without some flaws as the “ships” are practically identical, so it was common for me to think I was controlling one, when in fact I was controlling one I wasn’t paying attention to. Another point is that a few performance problems were noticeble when playing level 10 in 2-player co-op.

Tachyon Project is a game that shares a genre with so many classics, but unfortunately, it lacks any true standout characteristics of its own. Worse yet, it has balance issues and a learning curve that right from the get-go in story mode, can be quite frustrating to pick up. Even if you do learn all there is to know and are able to ignore Tachyon Project’s many issues, you will only have an okay experience at best, which means Tachyon Project is a game I would not recommend to most people as there are plenty of twin-stick shooter games on Switch that stand out more than this one.