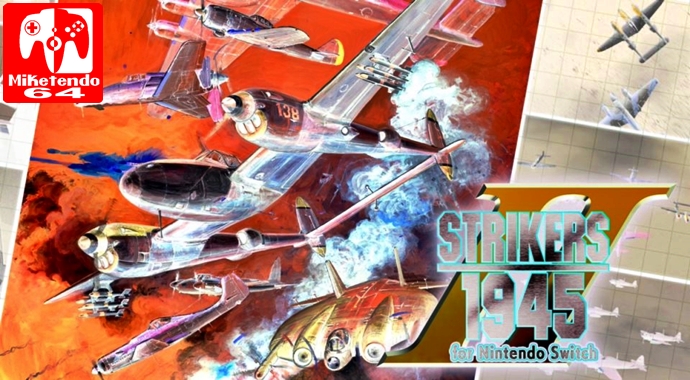 The battle didn’t end, it just went on pause!

If you have been following the Zerodiv arcade game offerings for Switch, these last few months, you’ll be well aware of the fact that one of the games they gave a new lease of life, was Strikers 1945 by Psikyo. Well, if you picked it up, enjoyed the gameplay and are eager to see the story continue, than Strikers 1945 II is a game you simply can’t pass on, for the war still wages on.

Set after the events of the first game, which ended with the Strikers succeeding in their mission to destroy “the forces of C.A.N.Y.,” a new enemy has made itself known. Armed with C.A.N.Y. technology, a faction known as F.G.R., harbours desires for an all-out war fought with massive mecha technology, and there is only one force capable of stopping them, and that force are the Strikers.

As an arcade game that launched within 2 years within the first game, there is next to no real differences between Strikers 1945 and Strikers 1945 II. Sure the set of 6 aircraft from the World War II era, you can choose between, are different from the aicraft in the first game, and the opposition is different, but that’s literally all that is different as gameplay and the general experience, is exactly the same. But what does that mean? Well, it means Strikers 1945 II is still the same kind of top-down scrolling shmup that Strikers 1945 is and just so happens to have 7 different difficulty levels, each ship having their own set of attacks and Specials (aka Bombs that can be triggered with the X and B buttons, with A and B being used to open fire.)

If you play the game on the easiest setting (Monkey,) and give yourself as many Ships (lives,) as possible (9,) in the settings with as many Continues as you want (1-99-Unlimited,) Strikers 1945 II can easily be bested in 30 minutes, due to solely consisting of 8 randomly assigned levels, with a 3 stage boss battle at the end of each one. Should you choose not to wimp out and go the easy route like I did for my initial playthrough, the option to make the game insanely difficult is present.

Strikers 1945 II on Switch is a game that wants you to play Strikers 1945 II, in the manner you wish, so if wish to turn up the heat and lessen the number of continues you allow yourself to have, you can and result of which will see Strikers 1945 II immediately become a truly nightmarish bullet hell adventure that can easily take you 4 hours of torment and tears, just to try and reach Stage 6, let alone actually beating the game with a friend thanks to supported co-op. After all, it only takes one lucky shot to bring you down and with every plane, tank and submarine, declaring You Season, everybody wants you dead!

Now, I would be lying if I didn’t say the satisfaction for beating Strikers 1945 II on the likes of Hard, are very satisfying indeed, especially since with the likes of Video Capture can be used at any time you perform and survive a daring feat, you can record it up to 30 seconds of it and upload it straight to Twitter and Facebook. (Look at me mum! I’m still playing arcade games, except this time I’m taking names and kicking butts. So much for you thinking I was wasting my weekly allowance at the local arcade!) And just like that, due to Strikers 1945 II, being a short and average arcade game at best, I have pretty said all that there really is worth talking about, without using flowery descriptions to drag out the review, so without further ado, it is time to bring this review to an end and see how Strikers 1945 II fairs once and for all!

Unless you’re looking to own the Strikers 1945 series on Switch, there is no real reason to actually get Strikers 1945 II, as it’s essentially the same as the first one, but has a different title and supports Video Capture. So, it certainly isn’t a game I can recommend, as Zero Gunner 2 is way better, but with more and more Zerodiv/Psikyo offerings coming to the Switch and available already, there is bound to be one game of theirs that will appeal to you as some of the offered arcade action does go toe-to-toe with the Neo Geo titles from Hamster.