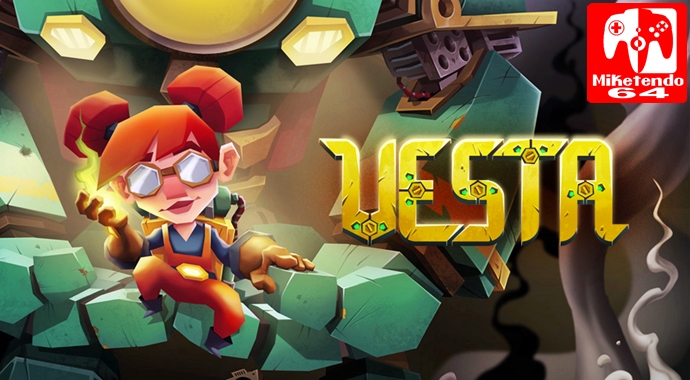 It takes two to tango!

If you have ever wanted to play a game that throws you into the shoes of a 6 year old girl, who just so happens to be the sole human being in a mining facility, such a game has arrived thanks to FinalBoss games and honestly, it has left me feeling pretty torn. Being a new indie game I knew very little about, I took to it with an open mind, ready and willing to let its story take me wherever it wanted, but the more I played it, the more Vesta started to feel like a Zelda clone, than an original title with Zelda-like environmental puzzle elements thrown in.

As a huge Zelda fan, I don’t mind if a game does go down the Zelda route, as World to the West and Blossom Tales: The Sleeping King are two great Zelda-like experiences already available on the Nintendo Switch, but I do prefer it if the game in question, does strive to be more original, or at least have a story that is on par with one of those you can expect from a Zelda game that isn’t TriForce Heroes. So what does Vesta have to offer in the way of a story? Vesta is the story about a girl named Vesta, (surprise, surprise,) who lives pretty much in a desolate wasteland of a mining facility that used to be populated by humans, until they were no longer needed to work there thanks to the superior machines they had built.

Although she is the sole human, Vesta is not alone as she is accompanied by a floating monitor called BOT, who happens to serve an A.I. called M.U.M, and constantly preaches about protocol to you. (Warning, if you hate the word protocol, I Vesta you will hear it said a lot!) Just don’t go trusting BOT and M.U.M. completely, as BOT clearly knows way more than he lets on and the first signs of this becomes known during the initial levels of the game. You can’t let the distrust affect you too much though, since you, BOT and another mechanical marvel must work together to make it to the surface and uncover some shocking truths.

Now, although most of the story is told via datalogs from computers, comic book-like cut-scenes and dialogue uttered straight from BOT, the comic book design is not the visual style you can expect to get used to, as Vesta actually looks like a HD version of the art style scene in Oceanhorn, but replaces sea and sand with robots, neon green acid and a sci-fi setting throughout, which by the way, was something I liked. On the subject of liking though, I liked how quickly Vesta can change once DROID joins the team. Granted you had to go through the process of solving puzzles and getting enough energy capsules to awaken DROID, but once he’s yours, the two of you can work together and turn the tide because whereas before Vesta would need to avoid enemies at all costs, because one hit and even a single touch, or fall could kill her, DROID fights back.

Armed with a projectile firing piece of arsenal, DROID can momentarily stun enemies, giving Vesta the chance to run over to them, to steal their life force and use it power a nearby cube to give life to moving platforms, opening doors and more. Sadly though, while he can strike back like the Empire did in Star Wars Episode V, DROID happens to have the aiming of a Storm Trooper. Although the laser sight that comes with his gun, does show the path his missiles that can be fired with ZR, will follow, his laser can not be as freely aimed as much as I would have liked, and the aiming is so sensitive that although 45° degree turns are supported, it only takes a minor flick to completely disrupt your shot and have you opening fire on Vesta, as opposed to the enemies and bosses you’re meant to be shooting.

Depending on where you are in a level, such as near the beginning, near the end or close to a checkpoint, killing Vesta will result in you have to either replay the entire level from scratch, or resume from the last checkpoint and the same will happen in the event of DROID dying as well. Unlike Vesta though, DROID can take a couple of hits before passing and while it is one thing to replay a scenario you have already tried and failed out, in the event of dying, it feels a lot worse when you fail to properly solve one of the many environmental puzzles, or make it to the end of the level, just to realise you don’t have anywhere near enough energy capsules to advance onto the next room, resulting in you having to restart the level all over again.

One piece of good news to take from the repeating though, is most of the game’s 36 levels (divided into 4 Chapters,) do feature discoverable secrets and by having to restart, you might just find yourself blowing up or moving a block you didn’t pay any attention too during your last attempt and discovering one of the 134 secrets, so there is a silver lining behind every cloud, but while Vesta is a game that looks and plays pretty great, I detest the protagonist. I hate to be “that” guy, but I just hate the fact that Vesta is a 6 year old girl, purely because she could easily have been 10 and that would make sense of her given intellect, attitude and aptitude for the trials she’s facing, whereas a 6 year old, no matter how much BOT has to teach her and tell her over the years, just doesn’t ring right with me and did stop me from enjoying Vesta as much as I could have been, purely because I just didn’t like the character.

If you’re looking for a game that tries a little too hard to be Zelda, but comes with a lovely visual style and 4-5 hours of gameplay, Vesta is a game that might just appeal to you, but with the Switch being a console where sharing is a big part of the fun, co-op support would have been a nice touch, but sadly, like more originality, this just wasn’t meant to be and Vesta is just too young and sure of herself, for me to view her as a believable and likeable protagonist.