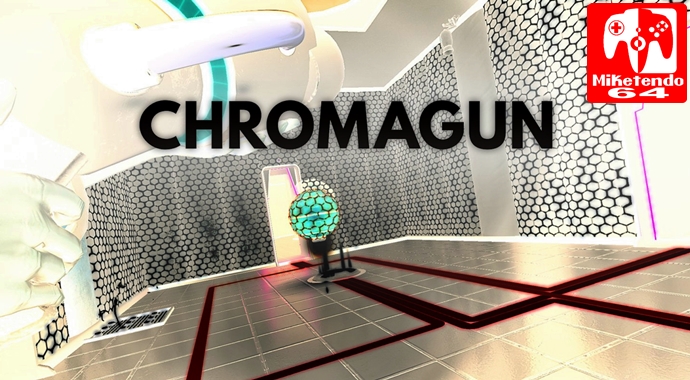 It’s time to paint the town yellow, blue and red!

Made with Unity and initially released in September, back in 2015, (the very same year Splatoon released on the Wii U,) the Pixel Maniacs developed and published ChromaGun, is a first-person shooter with a slight difference. Instead of wielding a gun that shoots bullets, you wield the ChromaTec patented ChromoGun. A weapon that has been designed to shoot a “specially developed blend of partially semi-lethal, dangerously radioactive isotopes,” (try saying that 10 times fast) that can “paint any surface not designed not to be painted by it.”

In terms of Story, ChromaGun is the tale of an unnamed character who visits ChromaTec on day, to undergo a series of tests designed not just to test the full capabilities of the weapon that can shoot three colours (red, yellow and blue,) which when mixed together, can create orange, green, purple and a browny black colour. (Red + blue = purple, yellow + red = orange, blue + yellow = green and red + blue + yellow = browny black) but a series of tests that are also meant to test you! (Trust me, you will be tested.) Before long, the series of tests are not the normal affair you believed it would be, but something of a trap that will kill you in more than one way if you’re not careful, because while it is true that some of the WorkerDroids will spike you to death, there are also a range of bobby traps, like electrified floor panels that will shock you on sight and require deactivating in order to pass over them safely. (Sacrificing a WorkerDroid you don’t need is a sure fire way to do it.

As for the tests themselves, being a game that gives you a gun that fires colours, it’s all about making use of the right colours, at the right time. On the earlier levels, all you need to do is listen to what the narrator (voiced by John “Johnny Stone” Sutton,”) has to say for himself and shoot a couple of WorkerDroids the right colour to move them out of your way, but things get a whole lot trickier the deeper down the rabbit hole you go. Whereas Chapter 1 and its associated rooms (levels) are a song and a dance, Chapter 2 turns up the heat and every time you mess up a single puzzle in any room, or die, you have no choice but to reset the level and try it all again. (It only takes one wall that needs to be purple, painted orange and it’s back to the drawing board with you!)

If you do often find yourself prone to failing though, don’t worry too much about it. ChromaGun has a soundtrack composed by Stephan Gembler and is only comprised of 8 Chapters and 26 rooms that can be beaten anywhere between 2-4 hours if you’re really good, but could easily be twice or triple that, if you are downright abysmal. (There’s no shame in it, I was, on the first playthrough.) Now, although ChromaGun is a first-person shooter puzzle game that can get way too repetitive very quickly, as even almost all of the rooms are similar to one another, the controls are worth praising, (especially when adjust the Invert Y-axis.) The left analog stick moves the protagonist (let’s call him Bob shall we? I like the name Bob) at a decent pace that isn’t running flat-out, or crawling at a snail’s pace.

With regards to the ZL button, it allows you to aim down the barrel, for those times when a precise shot is required, with ZR (or A) acting as the trigger buttons, but while the R and L shoulder buttons can cycle through the 3 prime colours, X, Y have also been put to work, due to having a colour associated to each one. It may not seem like some ground breaking thing, but to have each button serving a purpose that allows you to get to the colour you want, when you want it, without having to cycle through them, is a nice little touch on the developer’s part, as is the text on the bottom left hand side of the screen where the game tells you that X is for blue, Y is for yellow (obviously) and B is for red (B for blue would have been better.) If you need a little more convincing though as to why this feature is really good, well when the proverbial digestive waste hits the fan, and certain Spiked WorkerDroids are coming right at you, you can swiftly change to the required colour, shoot a paintable spot on the wall to attract the sphere-like enemy to cease their pursuit of you. (Warning, this trick will not work on every WorkerDroid.)

But do you know what I really like this about ChromaGun? I mean it’s not bad game, just not the usual thing I’m interested in and enjoy, but the actual feature that kept me playing it, is ChromaGun is a colourful game that can be played by those who are coloured blind. Very few games and developers take colour blind gamers into account, but Pixel Maniacs do and to make sure ChromaGun can be enjoyed by those unable to see colours like most of us can, each colour is represented by a different symbol and it was just such a nice touch that it did make me enjoy ChromaGun more than I thought I would and it’s all because Pixel Maniacs was being considerate, so good on you guys.

ChromaGun is clearly nothing like Splatoon as Splatoon is a gaming series that revolves around a city where Inklings shoot each other with colourful ink for fun and personal gain, but it is a considerate, yet déjà vu inducing first-person, puzzle game that will test both your skills and your resolve. So, if that’s the sort of thing you look for from a game, than ChromaGun and you, are a match made in heaven.