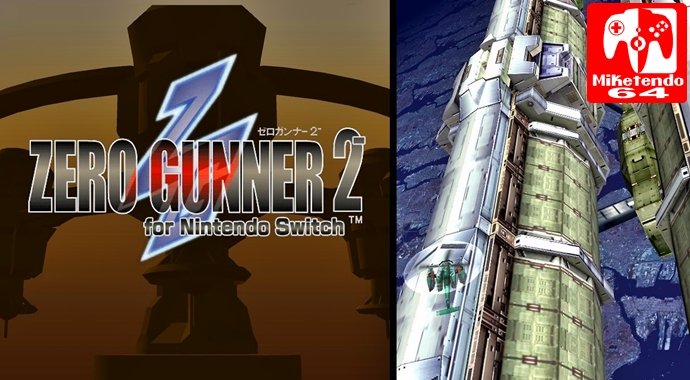 Already out via the Japanese eShop and releasing next week for Europe and North America, Zero Gunner 2 is the lasted Psikyo developed arcade game to be given the Nintendo Switch treatment via Zerodiv Inc. and to get it out of the way, out of all the Zerodiv offerings so far, it’s the best one and this review is going to explain why.

So to begin, unlike the other shmups Zerodiv have ported, Zero Gunner 2 is a full on multidirectional shooter where you can actually fly all over the screen, like you can with the other games, but by holding the Y button, a turn maker will be displayed and while you’re still holding Y, (or A) you can use the left analog stick to turn your ship round, so no matter where you are on the map, you can in fact always face the enemy ship and still dodge enemy fire and turn your ship round to face them. Oh and by ship, I mean Comanche, Apache and Hokum. Sure, variety wise there’s only the three vehicles to choose between, but they each perform a little differently and Apache is definitely the top dog out of the three!

Now, although you wouldn’t think it by playing the game, as it’s not narrated or disclosed in anyway. Zero Gunner 2 does have a story and it goes a little like this. Set in the near future, there is an Asian conglomerate known as Igem. Igem develops a unique energy source that is capable of developing some very innovative machines and because of all the over-abundant research with the energy, ONI, a weather control machine is soon constructed. Only, ONI is not good, because its purpose is to take over the world and once activated, the countries of the world are then subject to suffer from Igem’s tyranny as they conglomerate uses a secret militia to destroy any and all opposition. So, with no other options, the Zero Gunner squadron is formed and their mission and their purpose is to eradicate the threat that is ONI! Oh and just in case you were wondering, yes Zero Gunner 2 is a sequel to Psikyo’s 1997 Zero Gunner, but it is a completely different story that is unrelated.

With regards to gameplay and content, since the multidirectional shooter has been covered, Zero Gunner 2 pretty much plays like the rest of the shmups Zerodiv have ported to the Nintendo Switch. There are 7 difficulty modes that range from being ridiculously easy to “If I die one more time, I’m throwing my Switch in a lake,” a number of various stages to play, which are played in a random order and it only takes one single shot to blow your ship up. (War is hell.) But, death is never the end, because there things called lives and continues and you can change the number of how many you have, via the options, so if you lack skill, but still want to beat the game on the hardest setting, you can always give yourself 9 ships and infinite continues. Sure, you lose all points you’ll have attained if you die and choose to continue, but you can pick off where you left off and it makes beating all 7 stages and their associated bosses and if you still can’t do it, grab someone who is a more experienced gamer than yourself and have them act as the Iceman to your Maverick. Iceman is a lot better than Goose because (SPOILERS!) Goose dies in Top Gun, so have them be Iceman, Iceman lives.

However, if there is no available Iceman for you, then for the love of Miyamoto (that great gaming God many of us worship,) just spam the B button. B will let you fire your regular attack and then when power-ups are collected (they’re the items with a P on them,) you can truly deliver the hurt and even when that isn’t enough, that’s where the X button comes into play. It’s a special “Option Attack” that can really lay on the hurt and every time your ship gets blown up, you’ll get them all back, so don’t be afraid to use them, as using them often can win the battle and mess up a boss, even on the harder difficulties and if you feel like you don’t have enough of them, then pay a visit to Game Settings and increase the given amount to whatever setting you want (6 is the highest.) Should you feel the Option Attack is a cop out though, you can always reduce the number of them to make the game that little bit harder for yourself.

Purely for the sake of it, Zero Gunner 2 does handle itself pretty well, no matter how you choose to play it as the gameplay and execution is pretty flawless, just don’t go expecting the world when it comes to the graphics and music though, as Zero Gunner 2 is an arcade game from 2001. It looks great compared to the games that came before it, but it still looks and sounds like your typical generic arcade game, so if you’re seeking perfection, you won’t find it, but Zero Gunner 2 can offer you a pretty good shmup experience for an affordable price of $7.99 US dollars.

I wouldn’t say Zero Gunner 2 is hands-down the best arcade game on Nintendo Switch, as it isn’t at all, however it is the best shoot ‘em up styled game to be ported to the Switch thanks to Zerodiv. The multidirectional shooting gives you more control over your craft and the scenery is nice enough to look at, when you’re not too busy trying to dodge a hail of fire. So if you’re itching for some good arcade action that are retro, then Zero Gunner 2 has you covered, because it does a decent job of satisfying that itch and it really is Zerodiv’s best Switch game so far.