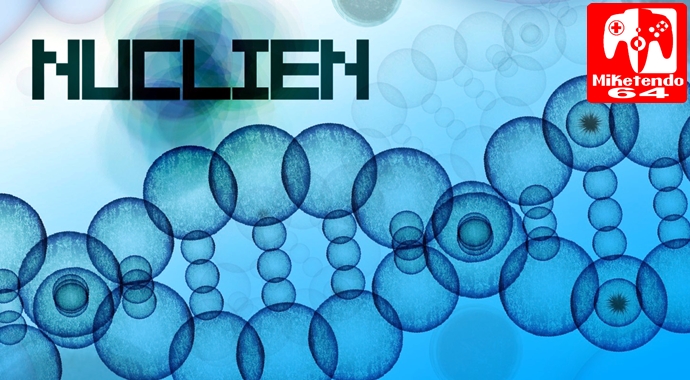 You are the architect, life is in your hands, and the new universe requires your help. Nuclien tasks you with tapping numbers in the correct order before the timer runs out. It sounds simple, but towards the end, you might just be sweating a little bit if you let your concentration drop – you need to act fast here. The game is only playable on hand-held mode thanks to its touch-screen only controls.

Across 77 stages, you will be challenged with tapping numbers in the correct order in an attempt to create DNA. At first, your world is a simple one, without as much as a background to begin with, just some entertaining electronic music to help you with your Godly task. To begin with, you’ll be wondering if the game will contain any challenge at all – the first batch of stages across each of the four worlds won’t have you making much of a thought, let alone will they see you break into a sweat. You will simply tap numbers, perhaps in time with the music. You don’t need to tap in time with the music, but it can help. Doing so can help you break into a rhythm – helpful in the latter stages of the game. At first, you may find the game tremendously easy (and a little dull, to be honest), but trust me, it does get harder; getting into a rhythm with the music is a good piece of advice.

Each of the four worlds comes with a different puzzle to solve. The first world simply tasks you with tapping the numbers as they appear, with no apparent rhyme or reason as to the order. Other worlds see you tapping the numbers from high to low, low to high, and then, it mixes them up together. Each world contains normal, hard and intense stages to get through. This typically means the amount of numbers rising, the timer becoming shorter, or the timer not refilling after successfully clearing a screen. New challenges are thrown into the mix naturally, too.

To help you out, the developers at Springloaded put nice visual clues in the game and explain each new one thoroughly. Each number is in a circle or a square, with larger shapes that may or may not contain a few regular sized ones, and different colours that represent (along with an up or down arrow) whether or not you need to tap the numbers in the order of highest to lowest, or lowest to highest. When all of this comes together, with a limited timer to work with, it can get quite tricky. It gets even harder in the final world. Here, it mixes everything, but flips the colours of the shapes every now and then that represents whether to count from highest to lowest, or lowest to highest. You will likely fail these later stages quite a lot.

Thankfully, there is a shop to spend your hard-earned coins in, on just two items. Upon the completion of each stage, you receive an amount of coins representative of your personal performance. Beyond your finishing time, however, I never understood exactly what the game was on about when it came to earning the most money possible. At the end of a stage you are awarded with a level between one and three, with three being the best, but I could never figure out how to collect the highest grade. Oh well. The two items available in the shop either increase your timer, or increase the amount of money you can earn upon completing a stage (in ten percent intervals).

On top of this (as I touched on above), the game awards you with a largely refilled timer once you have completed a single sequence. These sequences can be quite tricky, especially later on, but what you have is a game that consistently makes itself that little bit easier at the same time as becoming more difficult. As such, yes, you might fail quite a lot, but the short length of each stage, coupled with items that help you in your task to create life and a timer that refills upon successful basic maths and timing, you will find that Nuclien is never particularly frustrating. Difficult? It can be for sure, but frustrating it never is.

There are distractions in Nuclien as well as the flip-flopping of colours that you relied on in the later stages. The music can be catchy enough to throw you off your game. The backgrounds go from non-existent to trippy and screen-filling. As long as your concentration is on-point, you will rinse through all the game has to offer in around just two hours. Unfortunately, once you finish the 77 stages, there isn’t anything else to play through. This is unfortunate. Nuclien is a simple puzzle game in execution, but its bite-size levels, catchy music and decent gameplay ensure that it is a relatively addictive one. I wanted there to be more of the game after I finished it, but there is honestly nothing to bring me back. It’s disappointingly short.

Nuclien is a solid puzzle game, but it lacks content. After you’ve blitzed through the 77 stages it has on offer, with a little help from the shop and some good concentration (headphones are advised), you’ll have nothing else to do. There is a time-trial mode that sees you clearing stages without a timer, but there is no online leaderboard here, so there is little point to it. I would have liked the game to expand upon completion, throwing in a new world that is much harder than the rest. As it is, Nuclien is decent enough, but severely lacking in replay value, with a natural difficulty curve that, unfortunately, doesn’t become quite difficult enough.