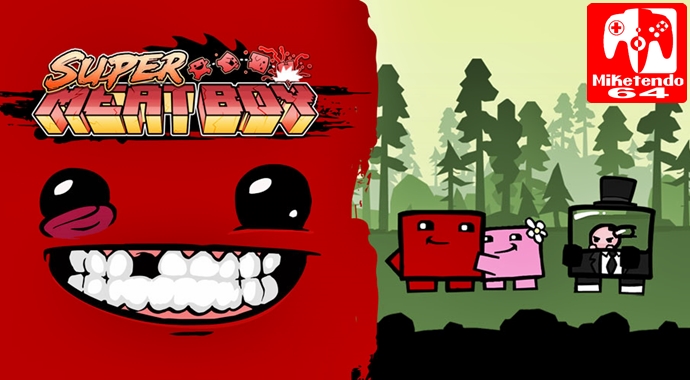 Slapping the meat one more time.

Super Meat Boy has now ascended to a point where you can find it on any platform. Similar to Sonic, similar to Doom, similar to Street Fighter II. If it isn’t on a platform, people question why. Now it seems like for the release on Switch, it’s the version to go for first.

I first came across Meat Boy in 2010 in passing when a housemate had pre-ordered it on his Xbox, and after that I owned it on macOS, PS4 and now Switch. Made by Tommy Refenes and Ed McMillen who called themselves Team Meat, they featured making the game in Indie Game: The Movie, which only made me want to buy it again. Mainly just from their passion for games and wanting to go for it. If you haven’t come across the game in its release on the Xbox 360 back in 2010, you control a slab of meat across five worlds, which, while easy to start with, you will be shouting at the screen eventually. For this game, it’s an inevitability.

The ‘story’ is heavily inspired from Mario, where the antagonist Dr. Fetus has kidnapped Meat’s girlfriend ‘Bandage Girl’, and it is up to you to go through five worlds, 4 bosses, and the (for now) final showdown. Each world gives you an intro movie, where it’s either a love letter to Castlevania or Ninja Gaiden. There are even additional levels where the difficulty is multiplied and the potential screams against the screen are as well, but the rewards do result in being able to play different characters with different abilities. You can collect bandages across the levels which allow you to claim these characters, and yet again it gives you the replayability.

The controls couldn’t be simpler, with the **ZR trigger** held down to run with the analogue stick, and the **A** button to jump anywhere you wish and to slide on walls when needed. Even on the Joy-Cons Controllers, no matter in what style you play them, in nunchuck mode or handheld, it plays great. There’s next to no latency and you’ll have no trouble in grabbing the walls and jumping between two blades already covered in red. I recently bought an 8BITDO SNES Pro controller, and it’s now the best of both worlds for me. Using the D-Pad and those coloured buttons almost takes me into an alternate 1994, where Meat Boy is highly rated in GamesMaster magazine alongside Sonic Mania on the Saturn in their review section.

The control is perfect, the shoulder buttons to help run and jump across vast distances, have no delayed latency on them, and there’s no extra weight. Even though there’s rumble, dual analogue sticks, and those extra shoulder buttons. As I’m trying to work my way through the extra hard versions of the levels, using this controller for them helps, and it does make me think I’m almost playing it on a SNES. Even though there wasn’t a multiplayer mode specifically, you could easily take it in turns with whoever was with you, and easily compare your times on the leaderboards. But now there’s something where you can really call it a 2 player game.

The new mode is simply called ‘**Race**’. This splits the screen down the middle, and gives two players the opportunity to, surprisingly, race against one another across the levels. You can track each of your progress by a bar that overlays the screen at the top. This was incredibly fun playing with the partner one evening, and even having the opportunity to play it on the train commute, the screen space for this is well-designed. Compared to Bomberman’s tabletop mode, it’s a godsend.

For £11.99, it’s a cheap deal for a game that will keep you going for months. Whether that’s collecting the bandages, achieving ‘**A+**’ grades on all levels, or just playing with a friend, either in the new Race mode or just taking turns, you can’t help but enjoy it. I haven’t even mentioned the other hidden levels, but I’d rather you just found it out for yourself. We’re in an age where barely anything is a secret. Play through this without knowing anything. If there’s an opening on a ledge, go for it. If you find a purple swirl, see where it takes you. When it comes to Switch, it seems as though it is the version it was made for after eight years. To be on a console that sits next to Mario Odyssey, Sonic Mania and Zelda: Breath of the Wild on the Switch home screen almost makes it seem as though it’s made the game and Team Meat go full circle from 2010. The sequel is (hopefully) coming this year, to even more platforms, including iOS. Whether it will live up to the original and be its own Empire Strikes Back remains to be seen. But for now, reminisce or just discover Super Meat Boy on the console that it seems as though it was destined to be on