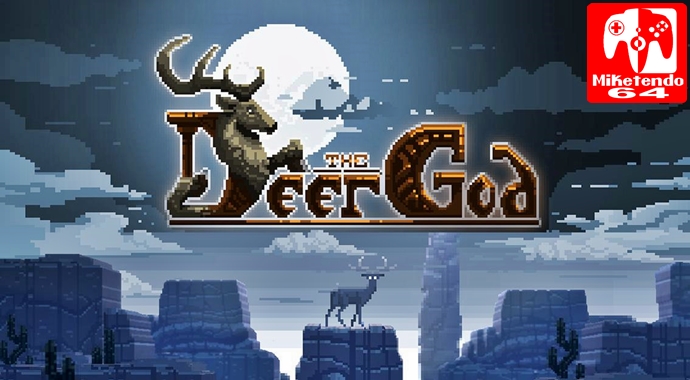 The Deer God lures you in with pretty graphics and what sounds like an enchanting tale surrounding religion, but you will quickly discover that there is little more to the game than running and jumping. Blowfish Studios desperately wanted to create a soul-searching, thought-provoking piece of art, but shallow, repetitive gameplay, poor sign-posting and a terrible camera lets down all these good intentions.

Billed as a survival game that will make you challenge your own beliefs, The Deer God opens rather well, showing you a moving scene where a hunter is struck down by wolves as he is attempting to shoot down a deer. You are whisked away to a white space dominated by the looming presence of the Deer God, who reincarnates you as a baby deer – it is up to you to learn from your human mistakes and live life as a deer and struggle through the harsh realities that come with it. The game sets itself up as something deep, with meaning, but this couldn’t be further from the truth unfortunately.

As soon as this memorable scene comes to an end, you are placed back in the forest as a baby deer, and you are tasked with surviving. This consists of running to the right, jumping and occasionally head-butting snakes (among various other enemies you’ll encounter). This is pretty much the entire experience of The Deer God. There is nothing deep, nothing moving and nothing particularly smart. This is a game that’s pretentious for the sake of pretension.

I’m being harsh here. There is more to the game than running and jumping, but not all that much. In the top-left corner of the screen you will see three bars: red for health, green for hunger and blue for energy (just next to them is an image that fills in with a blue hue, but more on that in a minute). You’ll need to pay attention to these three bars, as they all do mean something. Your health gets depleted when you are attacked by enemies and it will also slowly deplete if you let your green hunger bar deplete. To refill this you must stand over some food (or jump into apples on trees and bushes) and tap down on the d-pad or analogue stick to eat it, thus refuelling your deer.

The blue energy bar depletes when you attack or use magic attacks that you can unlock by completing simple puzzles that turn up every so often (these magic attacks are neat, but you basically never actually need to use them). The hunger bar refills both health and energy, but it will deplete as it does so. Luckily, when food isn’t around (a little too often for my liking), you can find items in smashed bushes, barrels and tree stumps to help you out. And there you have it – the main meat of The Deer God. You run, eat and occasionally tap the “Y” button to attack enemies (although you can ignore fighting by simply avoiding enemies if you wish).

Enemies and hunger aren’t the only things that can kill you, however. There are countless spike pits scattered throughout the procedurally generated world and for the most part, you won’t know these are there until you’ve fallen in. Indeed, the camera in The Deer God is awful. Throughout it is too close to the deer, and you can’t make it move down in order to see what is beneath you. Too many times I died simply because I couldn’t see what painful death was waiting beneath my quivering deer’s hooves. To make matters worse, the (at times stunning) art-design made it difficult to actually pin down where the deer was on the screen. Not until the post-game, or later on in the deer’s life did it become clearer.

Remember the image in the top-left I mentioned earlier? This is where it comes into play. Your deer will slowly grow older throughout the game, going through three stages of development. I’m unsure whether killing enemies (or friendly critters) sped the process up as The Deer God lacks any kind of sign-posting, but the bigger and older the deer, the further and higher you’ll jump and the more magic powers you can learn. It’s an interesting mechanic and one that’s made stronger by the fact that when you die (unless you collect a floating deer skull thing), you will come back as the baby deer. But like many aspects of the game, I would’ve liked some explanation as to how it actually works.

Throughout The Deer God, you are given tasks to perform in order to find relics that might help you break the cycle of living life as a deer, but none of them are that clear. You can simply run past story moments without noticing they were ever there, as I did during my first run of the game. If you do miss anything to do with the story, you’ll simply carry on running with no reason. However, if you manage to spot story characters and places, you can just as easily not manage to figure out what to do (one or two moments were completely obtuse). If you fail to spot a particular item, or cannot find one that is required to progress the story, the game will loop until you do – why doesn’t it do this for story moments you miss to begin with I’ll never know…

Here’s a hint for the story missions – most of them simply require you running to the right until you find something. There, I just gave more advice than the game ever gives. Bosses appear in caves completely randomly (I fought the same giant snake three times) and require you to very slowly whittle away their health in increasingly monotonous ways. You’ll see a bar on the item screen that fills in: red for evil, blue for good, but it’s never said whether this actually has any effect on the game in any meaningful way. The Deer God leaves you to figure things out for yourself, but there isn’t anything particularly interesting to see or do, and the payoff at the end is a dull, disappointing ending.

For all its promises of grand thought, religious connotations and smart story-telling The Deer God disappoints at nearly every turn. The gameplay is dull and overly repetitive, the story is largely non-existent and you are never given any hints as to how to progress in the game – you’ll easily miss things out that should have stood out more than they did. The deer progression system, magic powers and graphics are all neat, but they don’t make up for what is unfortunately a shallow experience that thinks it is far better than it is.

If you enjoyed this review and would like to see more (you know you want to), head on over to Toby Saunders Rad Reviews – you won’t be disappointed.