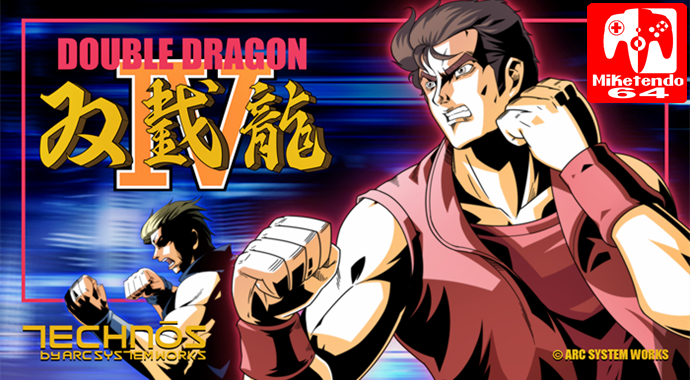 Nostalgia is a powerful thing, especially in the last 5 years.

Everyone wants a sequel to their game from their childhood, and sometimes a sequel happens to a series that no-one really asked for. Case in point goes to Double Dragon IV. Released thirty years since the original was on the NES, it was released for the PS4 and Xbox One in January, and then for Switch in September.

As the original developer of the series Technos Japan closed in 1996, a new developer bought the rights and have kept them ever since, who decided that 2017 was the year to release the fourth entry of street martial artists Billy and Jimmy’s adventure. But the original director, designer, programmer and composer have all returned, making this entry a true sequel to Double Dragon since 1990. Now developed by the same company from the upcoming Dragon Ball Fighterz due for release later this month, is it worth eight and a half gold coins from Arc System Works? Just.

The story (if you’ve even been waiting just for the continuing chapter of the kidnapped Marian), picks up where Double Dragon II left the player, as Marian once again needs rescuing. For the fourth time, it’s up to Billy and Jimmy to kick, jump, and uppercut their way through the city. There are 12 missions here, and each one is varied, becoming more difﬁcult as you go on, and I like that it doesn’t give you the easy option of saving anywhere you wish. If you decide to play another game, you can go back to the start of a mission on the title screen without playing through the whole game. There’s a lot of fun challenge here, and each mission can usually be completed in 10 minutes. There’s a lot of obstacles to dodge, while the music is a great mix of 80’s arcade themes and Final Fight-inspired tracks too. If it’s Game Over, you start the previous mission again with credits and health restored.

The ﬁnal mission is disappointingly the same as previous missions, with the ﬁnal boss being a duo with a gun for each, and after a short scene of your character and the bosses talking, that’s it. No credits, no extra unlockables, just back to the title screen. If you want to pick up and play for a short burst of 5 minutes, there’s also a tower mode once you complete the Story mode. This is where you can beat many enemies across many ﬂoors until you run out of health, unlocking even more characters for you to use. This looked like a direct call to Bruce Lee’s unﬁnished ﬁlm Game of Death from 1972 which I liked, and every ﬂoor brings another side of challenge which lets you practice on more moves on the enemies. It’s just a shame that there’s no Leaderboard or Online functionality for this part, as this would be a great way of comparing with friends how far you reached before perishing.

The controls are simple enough, with X being used for jump, B for punch, A for kick, and Y for a special attack. There’s no delay when you hit an enemy and it does feel satisfying when you perform an uppercut, but when you try to jump from one platform to the next, it can feel very stiff. When you land on a conveyor belt and you’re trying to jump again, you can miss it and land to your death. The pickups are weapons that vary from a chain-whip, to a crate that can dispense many explosives which seem to take a year in detonating. Apparently there are health pickups, but in the time I’ve played and completed the game, I haven’t seen one.

As you play through the missions you unlock more characters to play as in a ‘Duel’ mode which is a part of the 2-Player mode. 2 Player is a fun time, and can be used very well in every situation you will have the Switch, from table-top mode to the full TV experience. You can play through cooperatively or just duke it out in the classic Golden Axe style for no raisin if you wish. It’s a shame that 4 player is absent, as this would have been perfect for a game like this. There’s no need for split screen, and so it would have been an easy addition to have four players on this through the missions. Using a single Joy-Con is ﬁne, and even makes you reminisce of playing the original Double Dragon on the NES, but it’s also times like this that a D-Pad would be much welcome.

While released for other platforms at the start of 2017, it feels as though it’s a better match on the Switch. I played it more on the train commute from my house to work each morning and evening than I did on a TV, and using different characters in Story mode kept the replayability going. It’s a simple walk and beat-em-up game with some stiff controls, but ultimately for £8.50, it’s a good deal for something you can complete in one evening, alongside 2 player fun and a tower mode.