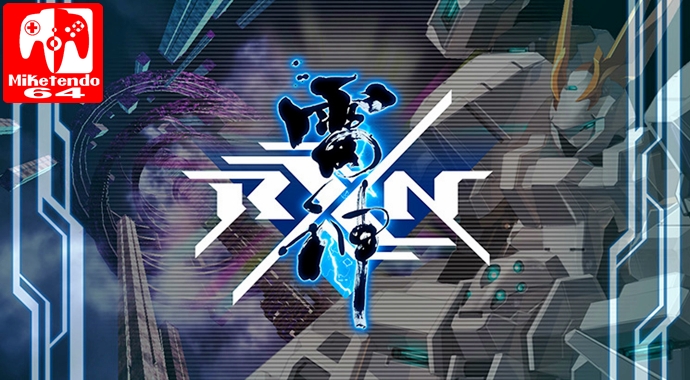 Grinding your way to victory, one vertically-scrolling widescreen shooter level at a time!

Developed by the shmup specialists Gulti and published by “The Fun-Loving Corporation” Kayac, RXN -Raijin- (“Thunder God,”) was created to celebrate Gulti’s 10th anniversary in the industry. A game that is said to “emphasizes the fundamentals of the shmup genre,” which of course are “shoot, dodge & destroy,” but while RXN –Raijin- does indeed meet that criteria, it fundamentally does not justify its high price tag of $38.00 US dollars.

I’m not usually one to be put off by price, because if I like something I will buy it, there’s no discussion on that, but even if I had a friend who owned RXN -Raijin- and I played it and loved it, I don’t see it being a game I could easily buy and I know this is the wrong way to properly kick off a review, but this is something this review will keep on gaming back to, so it did need to be said as early on as possible. You see despite RXN -Raijin- having much better graphics and a smoother presentation to the overall game compared to the likes of Gunbird, there really isn’t that much difference gameplay wise between the two games.

They’re both arcade games, they require you to shoot, dodge and destroy, they offer different characters and RXNs to play as, (special aircrafts that the three playable characters pilot,) but whereas one is easily affordable, the other one is just too expensive. Despite anime characters, an anime opening movie sequence, that comes complete with a song sung in Japanese, Japanese dialogue all throughout the game that and quite a bit of content to go through, thanks to 50 levels to beat with each character and multiple endings, it just isn’t enough.

I love shmups as much as the next guy and a game that has quite the number of levels to get through is something that would normally, but if I’m going to fork out more than $25.oo US dollars on a game, I want something more to justify purchasing it. I want a memorable soundtrack, a promise that it is something I will definitely keep playing and get my money’s worth back on it, or a fantastic story that would keep me engaged and RXN -Raijin- failed to meet that criteria. During my first playthrough of the game, I did so with not knowing it was actually possible to turn the Japanese dialogue into English, so because I was unable to understand the story, I made up my own one. However I did find out it was possible to put the text into English and learn more and more about the story with each level I played, only given the nature of the game and how quick everything happens, no matter how many times you play the same level over and over, you’ll still miss parts of the dialogue that appears on the top right-hand side of the screen, as you’ll often find yourself drawing your attention away from it, to focus on the Ulkas that you have to destroy and their torrents of gunfire, blasts and missiles you’ll have to narrowly dodge.

So, even though there is a story at play, it is actually very hard to keep up with all the ins and outs, but long story short, the bad guy who you find out about near the beginning of the game is Yutaka. The ships/mechas you fly/control known as RXNs all feature a part of Yuna installed in them, which is a God who actually existed and is believed in by humans and the three playable characters (Light Tachibana, Gin Tachibana and Luna Naruto) who are all part of a large military-like unit that is well aware of ether, etheric levels, Ulkas and how to fight them. Oh and you don’t need to worry or feel bad about destroying the Ulkas because although they are like the RXNs and unnamed, they’re not living organisms per se, so you are encouraged to kill them, as J-Pop music floods your eardrums.

Now, poor story aside, as so much of it is easy to miss and what we ended up getting, was not the same bizarre tale I imagined for the game when I was playing it all in Japanese, there are some aspects that I feel RXN -Raijin- does deliver in. Yes, there are times when you are completed surrounded by enemies and projectiles you need to dodge, and the frame-rate drops, but it is minor most of the time and the controls themselves are actually rather quite good. You can’t use the right analog stick in any capacity, but the left stick will move you, with the Y, B and A buttons acting as the trigger buttons for different types of weapons, with Y being the more powerful, yet slower attack, with B more as a burst attack and A being the quick-fire one, but it is the X button where things really get interesting.

If your health/shield bar depletes, you’re dead and you have to start the level over all from the beginning if you want, but if you’re surrounded and the bullet fire is just too much to dodge, pressing X will cause you to use your Kakusei Special Attack. Sure, it costs you some of your life, which can be regenerated after a little cooldown, as your shield is constantly repairing itself, but when triggered, the bullet fire dissipates and if you’re strong enough or the enemies are just weak, they’ll all end up dead and that’s “a-okay” in my book.

This will not however, save you all the time, as enemies will get harder and using it at the wrong time can see your life bar shortened so much that the next Ulka you see, ends your reign of tyranny. To counter this though, it is in your best efforts to replay the earlier levels because every time you do, the enemies upon being killed drop items of sorts that when collected enough of each type, will level your ship up, so that you can become even stronger and I hate to say it, but I had to grind RXN -Raijin- so much so that it actually took me to grind all the way up to level 99 with a single player, just to beat the last five levels the game had to throw at me. Sure, some levels you can play, will have you jump up 4 levels if you’re lucky, but others will only see you go up one at a time and although I really did like this feature of the game, as there is no changeable difficulty setting, I don’t like it enough to want to grind the other two players to max level. Once is enough.

RXN -Raijin- really does have the makings to be a great shmup, but it just as too many flaws, to make it worthy of claiming that crown for itself. Yes, I did greatly enjoy it for at least 4 out of the 8 hours I put into it, but ultimately, it is just far too expensive to even warrant checking it out or recommending it to someone who loves shmups, as $18.00 US dollars would have been a much more justifiable price tag. So, sorry RXN -Raijin-, you’re just not a winner in my book.