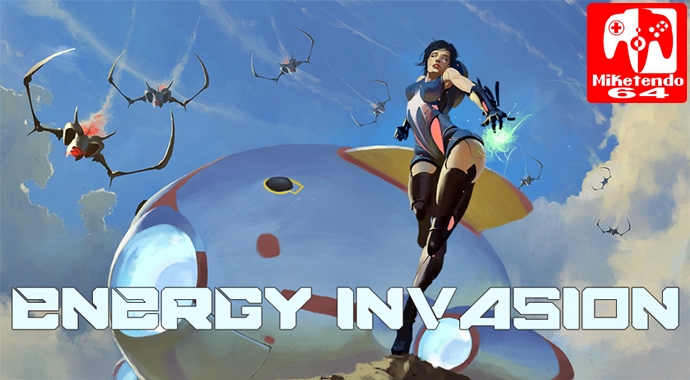 Breakout is back, but not quite in the way we know it!

Fresh from reviewing one “Energy” game by Sometimes You this week, I’ve dived right into another one, only this time Energy Invasion is the name and it is entirely a new game! When Energy Invasion heads to the European Switch eShop on the 10th of January, it will also become available for Steam, PlayStation 4 and PlayStation Vita, but for the sake of asking it, just what the hell is Energy Invasion?

Well, besides being the latest continuation to the Energy series by Sometimes You, with Energy Balance being the first and launching on the 16th of January, it is an arcade-like puzzle game of a slightly different genre as it is more breakout, as opposed to a colour match game like Energy Cycle is. Now, while it is a breakout-like game, it doesn’t really follow any of the typical breakout rows. There are tiles that need to be broken and some do take more than just the one hit to break them, but with Energy Invasion, it is not the ball you strike with the paddle to hit the bricks that breaks them, but actually the projectiles the ball shoots. Although, instead of being called a ball, it is an energy sphere and those projectiles you fire are actually rockets. The aim of the game however, is pretty much the same though, as each stage is completed by destroying every brick on the screen.

Should you find yourself thinking about rockets though and wondering why they are even present in the first place, it’s because while Energy Invasion is a breakout-like game, it’s also something of a twin-stick shooter, due to its support for twin-stick controllers like the Switch’s Pro Controller, so while the left stick moves the paddle to strike the energy sphere and try to stop it from getting past you, the right stick can be used to flick it and fire in the direction of your choosing. (It’s not as accurate as I like, but you can fire multiple missiles, so I’m not complaining.) Something it does do that does follow the rules of breakout-like games, is that there are bonuses that can be collected but while some help you, like a laser near the bottom of the screen, to stop the energy sphere from getting past you, but most will hinder.

As for dying, you’re really not going to have to worry about that, because not only can Energy Invasion be plentiful with the lives it gives, but even in the event you die in any of the game’s 3 modes, you will be asked if you wish to continue and keep playing, thanks to another set of 5 lives and you can just keep on going until you beat the game, get bored, or run out of time. So long story short, although Energy Invasion does only cost $2.99 like Energy Cycle does, and have 3 game modes like Cycle does, while it is challenging, it also wants you to win, even when the levels with the enemies are shooting missiles at you. Thus, it really doesn’t matter if you’re playing Invasion mode, which has both an Easy and a Normal difficulty setting, which is packed with 25 levels, Linear mode, which also has 25 levels and has lines of bricks that slowly advance with the passing of time, or Endless mode, because fundamentally Energy Invasion wants you to win, but wants to make sure you’re being challenged at the same time. Not to the extent you’ll rip your own hair enough out, but enough to make sure you get a feeling of accomplishment, every time you beat a level when you’re down to your last life. But because of the nature of the game, although the soundtrack by Nick R 61 and the graphics aren’t all that and are just as club like as the soundtrack and graphics from Energy Cycle is, if you wish to have the time to check them out and make an opinion of your own of them, you can. Just don’t look too long, as you will lose a life if you take your eye off the energy sphere for too long.

Although Energy Invasion lacks touch-screen controls to play the game, like Energy Cycle does, due to the twin-stick nature of the game, it does have a supported touch-screen interactive menu. More importantly, it has better/more engaging gameplay so if you had to choose between Cycle and Invasion, then definitely pick the latter as it is the better game, but even then, it is still just a very mediocre game available at a very cheap price, so if you feel like taking a punt on it, it wouldn’t break the bank or your state of mind.