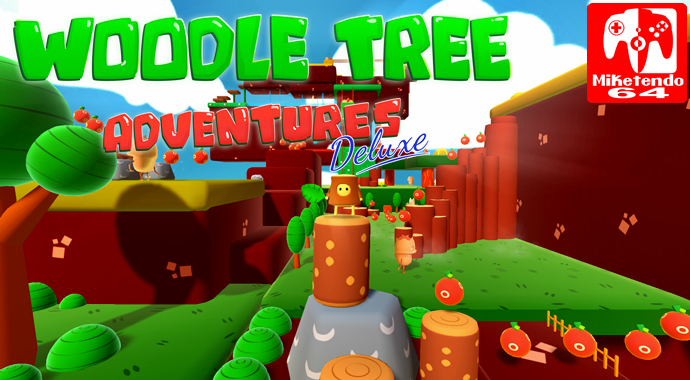 Some heroes aren’t just born, they are given life by a tree with a moustache and a mission to water a thirsty world!

Developed by Fabio Ferrara and published by Chubby Pixel, Woodle Tree Adventures, first made a splash back in 2014, when Chubby Pixel brought the tree focused platformer to Steam on the 6th of June. By no means was it the biggest platformer, as the game solely consisted of 6 worlds and a hub world, but the game with a colourfully cute and rather unique art style, did go on to win the hearts of some of those who played it. A sequel by the name of Woodle Tree 2: Worlds was released in 2016 and it changed what the game could be. It was a much larger open world platformer than the first game was and had a hell of a lot more features at play, as the little Woodle Tree protagonist, could now use his leaf to glide, have tea with a fox and push a block.

If it wasn’t for the fact both games share a protagonist, a title, the same graphics and catchy tunes that are of the old school variety, you would think the two games have nothing to do with one another as Woodle Tree 2: Worlds, is on a whole other level. In fact, it is actually a shame the sequel isn’t on Switch, as it does look like a game that players of any age can enjoy, despite the children’s TV show vibe it has going on, but instead, for now, what we’ve got is the first game in the series. (On the day of typing this review, Chubby Pixel confirmed on Twitter that the sequel is in the process of being ported to the Nintendo Switch.)

Although the camera angles and movements have been reworked, there are plenty of instances across the various levels when the camera placement feels completely wrong and even when you use the right analog stick to zoom in or out, it can still be more of a hindrance than an actual help, so if you do plummet to your death, get ready to respawn at an earlier save point on the world you’re currently playing. The good news about dying though, is that in this 3D platformer, the lives are infinite and all the berries and Fairy’s Tears that you collected, will remain intact, so as long as you picked them up, no matter how many times you die, even when the enemies you’ll encounter, one hit KO you, your little knapsack on your back, will remain full!

Now, while the Fairy’s Tears are very important to collect as there are three on each level and are the whole point of Woodle Tree Adventures Deluxe, as it is the protagonist’s task to collect these tears, to quench the thirst of a thirsty world, but the berries are important to get as well. Sure you can’t advance to the next level unless you collect all three Tears and take them to the cups located near the end of the level, but there are two levels that withheld from you, as each one requires a set number of berries to unlock them, and there are items that take the same approach as well. In the hub world, which is where all worlds can be accessed, both in and outside your house, for 200 berries, you can get a better leaf, then an even better leaf for 400 and the best leaf going for 800. Each leaf can kill enemies in the one hit, but some of them actually fire off a projectile/gust of wind of sorts. As for 850 berries that will let you unlock a headband that can be worn in a bid to decorating your little Woodle Tree.

So without a doubt, it does definitely pay to strive to run and jump your way into collecting every berry going, even if the controls do seem to try and over compensate  by having you jump further than you would like, but childlike or not, although Woodle Tree Adventures Deluxe can be beaten well within 2 hours, it can be a pretty enjoyable game if you give it a chance and give yourself over to the tranquil tunes that are there to serenade you with serenity, as opposed to making you jump up and down like any kids song from most kid shows. So definitely don’t underestimate Woodle Tree Adventures Deluxe, it won’t blow your mind, but it can surprise you as you will enjoy it more than you think you will.

Although Woodle Tree Adventures Deluxe is not a platformer that can solely be played by those who aren’t adults, as older players above the age of 18 can enjoy this simpler take on the platformer genre, I do however think that Woodle is better played with children. If you are a parent and you have a young child looking for a game they can play by themselves, with you sat beside them, ready to assist or give advice, then this is where Woodle comes into its own. It is the video game equivalent to a bicycle with stabilisers on that can be played more than once, so you’ll easily get your $4.99 back. But even if you don’t have a child, you can still get it, as you’ll probably play it at least twice in the whole time you have it because it’s not a bad game, but during both those times you play, you won’t get the true experience Woodle Tree Adventures Deluxe has to offer.